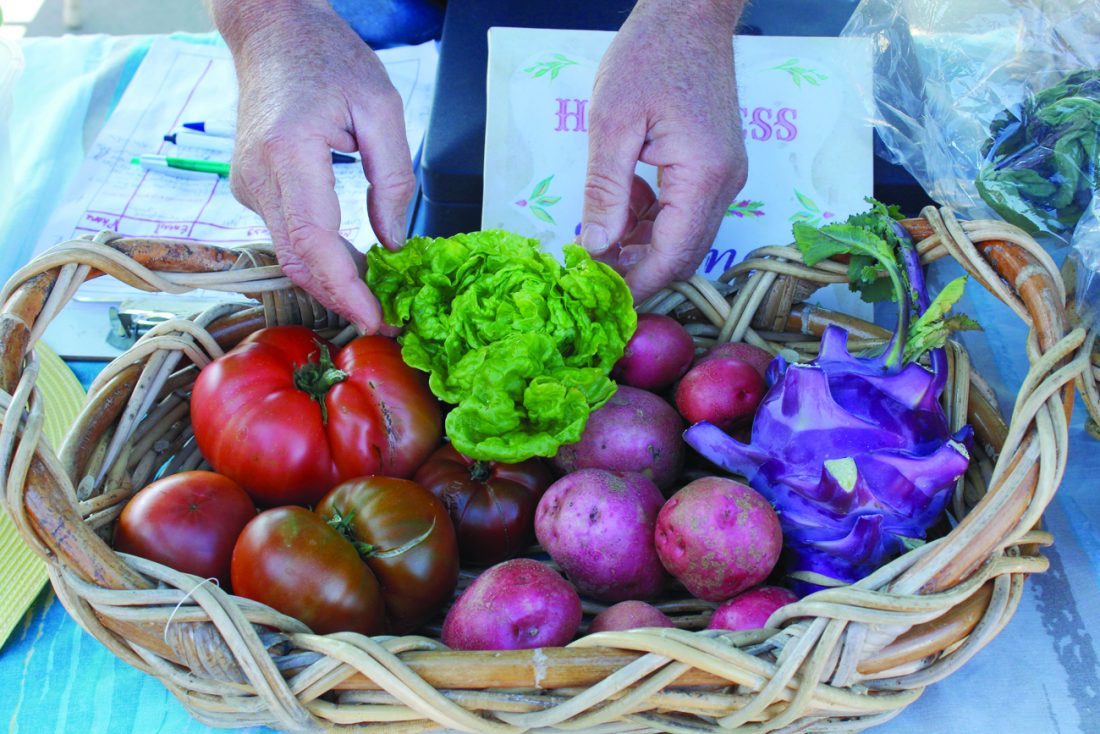 Dan Perkins of Partridge Creek Farms in Ishpeming puts fresh lettuce, tomatoes, potatoes and Kohlrabi from his farm in a basket during the Downtown Marquette Farmers Market. (Journal photo by Trinity Carey)

MARQUETTE — Though the leaves have already begun to change and you may have turned the heat on in your car a few mornings, Monday marks the first official day of fall.

And some foods just taste better in certain seasons. In the spring it’s sprouts and mushrooms. In the summer we seek out juicy fruits like strawberries and cherries. And fall calls for colorful squash, root vegetables, and of course, crisp apples. Eating foods that are in season doesn’t just taste better, it’s better for you, too.

Now is the best time to find just about any produce you may be craving in abundance, said Myra Zyburt, market manager for the Downtown Marquette Farmers Market.

“This is the collision of summer and fall right now and literally just about anything that you would want to eat is available right now,” Zyburt said. “Tomatoes, cucumbers, greens, carrots, celery, corn on the cob; there’s watermelon, there’s cantaloupe melon, there’s beets, the root vegetables are coming back, there’s pumpkins, there’s both the summer squash with the zuccini, and yellow squash and other varieties that the farmers choose to grow because they don’t have to choose things that have to store. They can choose things that are a little more tender or a little more unique that can take up space.”

Because these in-season foods can be found at the farmers market and some local grocery stores from Upper Peninsula farmers, they don’t have to travel as far as the produce on the shelves in box grocery stores. This reduces carbon emissions and means the food was picked at its ripest state.

“We have the advantage up here that we have a lot of farmers who are working to grow food as well as choosing food that is in-season,” Zyburt said. “We also have the opportunity to choose food that is local in terms of transportation, most of it within 100 miles. That means you’re getting it at the freshest point of the food cycle. It will keep if you can’t get to it right away and it tastes just the best. All of that contributes to the nutritional quality of it rather than if it’s picked young, stored, transported and then stored again, which is the cycle when you purchase in other places.”

Buying produce off the shelves out of season usually means the product was picked before it reached ripeness, so that it can ripen in a box during shipping.

Local farmers have been working to extend their growing season through different growing techniques such as hoop houses, rotating and insulating crops, Zyburt said.

Certain fruits like raspberries and veggies like snap peas have most likely made their last appearance at the farmers market for the season, but some summer produce like currants and gooseberries are still available, Zyburt said.

With the fall season comes plentiful potatoes, kohlrabi, some fall berries, pears, plums and apples. When temperatures drop low enough for frost, much of the current produce won’t be available. The frost point varies each year and depends on a farm’s elevation and location relative to Lake Superior, but the farmers here hope to get through at least mid-October, she said.

But some fruits and vegetables will actually benefit from the layer of frost.

“There’s certain produce that you kind of wait for frost because it’ll get sweeter, so some of the root vegetables, different varieties of carrots, Concord grapes, some of the late apples will be sweeter after the frost,” Zyburt said. “There are things that can tolerate it, so again that just extends what’s available in our area well into November and December.”

In-season fruits and vegetables and even decorative varieties of squash are available at the Downtown Marquette Farmers Market, which takes place from 9 a.m. to 1 p.m. every Saturday at the Marquette Commons. You can also pick up fruits and vegetables of fall at the last Wednesday market of the season on from 5 to 7 p.m. on Sept. 25.

“When you shop the market you’re getting exactly what’s in season that moment and when you shop frequently you’ll have a nice variety of food in your diet and see what’s there.”

Visit Taste the Local Difference’s website for a seasonality guide, recipes that focus on local produce and a full list of farms near you and what foods they produce.