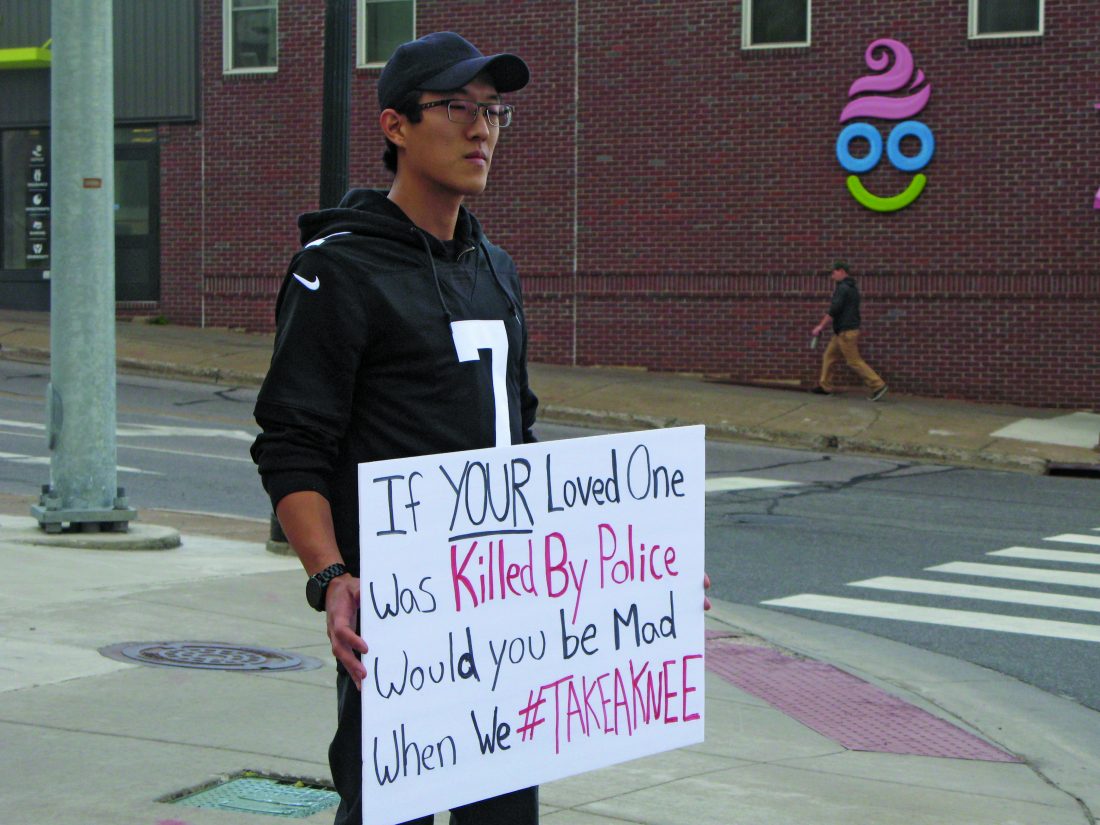 Tom Moseley of Marquette leads a “Take A Knee Peaceful Protest” on Thursday in downtown Marquette. The purpose of the protest was to bring attention to police violence. (Journal photo by Christie Bleck)

MARQUETTE — It might not be a major issue in the city of Marquette, but police violence has been a problem in other areas in the United States, and at least one local man is concerned about it.

Tom Moseley of Marquette held a “Take A Knee Peaceful Protest” by the U.S. Postal Service building at the corner of Washington and Third streets Thursday evening to bring attention to police violence, coinciding with the beginning of the National Football League regular season.

The timing was to support the mission of NFL player Colin Kaepernick, also an activist who gained particular fame when he started the “take a knee” national anthem protest against police brutality.

“That kind of really propelled the issue and helps ignite the fire under the discussion of the topic,” Moseley said.

He mentioned Kaepernick’s campaign, Know Your Rights Camp, as an inspiration.

According to its website at www.knowyourrightscamp.com, its mission is to advance the liberation and well-being of black and brown communities through education, self-empowerment, mass mobilization and creating new systems that elevate the next generation of “change leaders.”

Moseley held a peaceful protest in 2018 as well.

“I made a lot of connections through the work I did throughout the football season last year,” Moseley said. “It’s been really positive.”

His efforts are not yet finished.

“It’s just good to get out and continue to help spread the message, especially at the street level,” he said.

Moseley said that when a police officer kills a person in the United States, few charges are made, and even rarer are murder and manslaughter charges.

He believes policy flaws are part of the problem.

“The United States has roughly 4.4% of the population, but over 20% of the world’s incarcerated population,” Moseley said.

“There are far less white people incarcerated in this country,” Moseley said.

What he calls the “local lack of knowledge” on the topic helps motivate him to speak out on it.

The Upper Peninsula, he noted, is sheltered geographically, which contributes to the lack of awareness.

“A lot of the problems that affect other areas don’t get a lot of attention here,” he said.

Moseley believes they should.

“Just because something doesn’t happen to someone personally doesn’t mean it’s not happening to someone else, or make it less bad for those people that it is happening to,” he said.

Moseley had several suggestions for individuals concerned about police violence.

“When you hear people talking negatively about something like this, just try to provide some transparency, and help people that are maybe offended by the message see that it’s not meant to promote any kind of disrespect,” he said. “It’s just really highlighting the issue of unnecessary violence, especially racial bias.”

He recommended people record their interactions with police as much as possible.

“They do infringe, in fact, on people’s rights on a regular basis,” Moseley said. “Just record and ask for their badge number, and be mindful of the rights that we all do have, or are supposed to have.”