No limits in sight 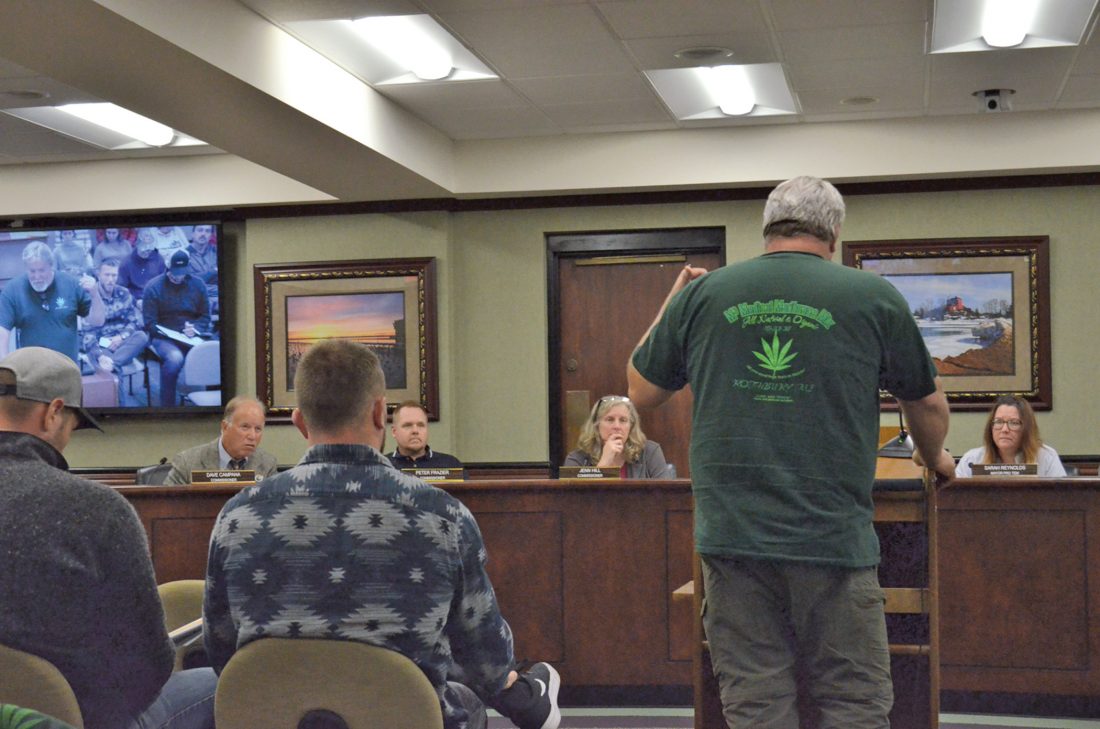 An area resident, front right, states his interest in opening up a marijuana business in Marquette during the public comment session at Monday night’s meeting of the Marquette City Commission. In the background, from left, Commissioners Dave Campana, Pete Frazier, Jenn Hill and Mayor Pro Tem Sarah Reynolds are pictured. Commissioners voted 4-3 Monday to not limit numbers or types of licenses for commercial adult-use marijuana establishments under a proposed ordinance that would allow the businesses in the city. The commission will vote upon the proposed ordinance and hold a public hearing on Oct. 15. (Journal photo by Cecilia Brown)

MARQUETTE — The Marquette City Commission on Monday voted 4-3 not to establish limits on numbers and types of licenses for commercial adult-use marijuana establishments under a proposed ordinance to allow the businesses in the city, continuing a discussion from a work session held Wednesday.

The commission will vote on the proposed ordinance and hold a public hearing on Oct. 15.

The motion was made by Commissioner Jenna Smith and seconded by Mayor Pro Tem Sarah Reynolds. The dissenting votes were cast by Mayor Fred Stonehouse and Commissioners Dave Campana and Pete Frazier.

Each municipality has the right to determine whether to allow or prohibit marijuana establishments within its boundaries under the Michigan Regulation and Taxation of Marihuana Act, which voters approved in the November election to legalize recreational use by anyone 21 and older. The commission in February opted out of allowing commercial marijuana establishments within city limits, citing concerns about a lack of state rules and regulations on the establishments.

The commission is revisiting the issue now because the Michigan Department of Licensing and Regulatory Affairs Marijuana Regulatory Agency issued emergency rules July 3 that provide details on licensing, labeling requirements, zoning and more.

The rules, which are effective through January and can be extended for one six-month period, allow licensing applications to be accepted by the state in a two-step process starting Nov. 1.

At Wednesday’s work session on the proposed draft ordinance, commissioners were asked to consider the types of licenses and numbers of each type to be allowed, but were unable to reach a consensus or take formal action on whether the number of establishments would be better dictated by zoning constraints and the market, or by restricting the number of licenses granted and expanding as needed.

Prior to Monday’s vote, Marquette City Attorney Ron Keefe presented staff recommendations for the numbers and types of licenses to be allowed under the proposed ordinance in the city, which were based upon analysis of how other cities have approached the matter.

In response to the recommendations, Smith commented: “As I said in the work session last week and as I will continue to say, I am in favor of not setting limits and letting the market and zoning dictate.”

Smith and Commissioner Jenn Hill also said this approach could eliminate the potentially difficult decisions that may come up in a competitive process for licenses, as the state requires municipalities to make the process competitive if there are more applicants than available licenses.

“If we leave it wide open, we don’t have to get involved in the competitive process and don’t have to play favorites that way,” Smith said. “So it eliminates that piece of the puzzle for staff and the commission.”

Stonehouse, Campana and Frazier expressed some reservations about an unlimited approach to licensing the establishments citing public opinion, the number of marijuana businesses the city can support and lack of finalized state rules.

Hill and Commissioner Paul Schloegel said they would both be amendable to open limits and allowing the market and zoning to dictate the numbers, especially knowing that the ordinance will be a “living document” subject to revision as businesses begin to operate locally and state rules are finalized.

“I’m a bit more conservative on this, I want it to be allowed, but I don’t want a lot of them around, quite honestly,” Schloegel said. “We can say 10, we can say five retailers or micro-businesses, but again, business is going to dictate who’s going to be left at the end of the day … I want to put limits on this really bad, but I just can’t do it and then come back in a year and say we’re going to take this in a new direction.”

City staff also presented a map indicating the areas where facilities could be located based on the proposed ordinance, the state’s emergency rules, zoning constraints and a 500-foot “buffer zone” from schools.

“The next step the planning commission would take would be to take this map and the emergency rules and then the guidance from the city commission if the ordinance is adopted,” he said. “Then they would come up with particular standards for each one of these parcels.”

During the public comment session, a representative from the Women’s Center asked the commission to consider creating a “buffer zone” — much like the 500-foot zone around a school where establishments would be prohibited from operating — around the Women’s Center and potentially other social service agencies in commercially zoned areas. Commissioners responded she could address the matter with the city planning commission as the specifics about zoning requirements move forward this fall.

Keefe also outlined a proposed timeline for the process, which would involve approving and developing the ordinance, as well as associated land development code amendments that would be needed.

If the ordinance and land development code changes are approved and the process goes as planned, these establishments could be allowed within city limits effective by the end of December.

The proposed ordinance language is expected to be posted for the public’s review by the end of this month.

Visit marquettemi.gov for updates on the process. For more information on the state law, visit michigan.gov/marijuana.