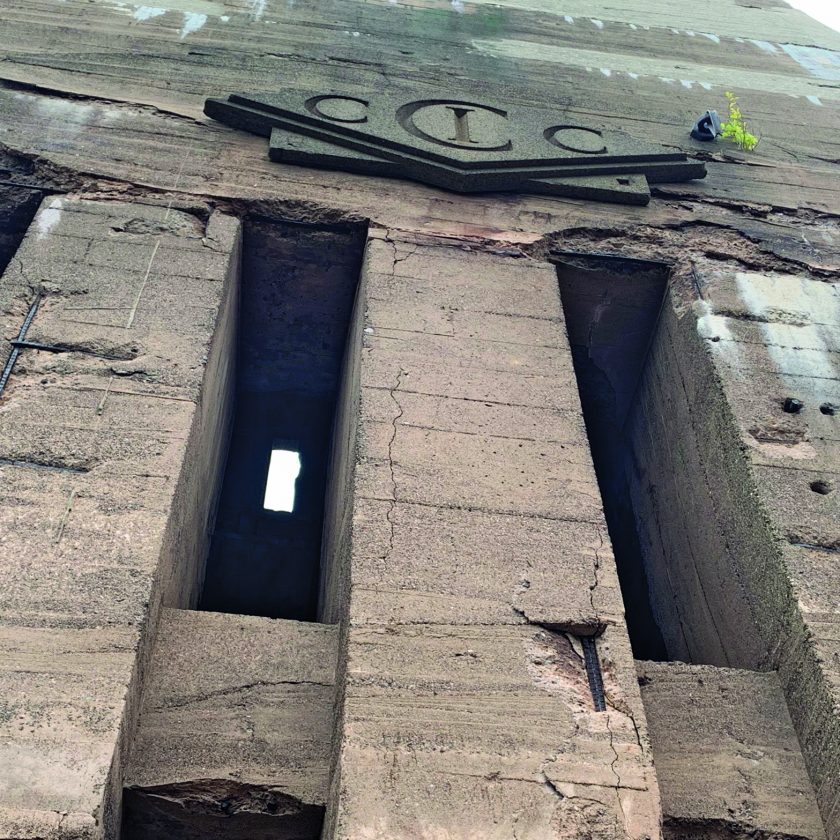 Pictured is part of the A shaft head-frame at the Cliffs Shaft Mine Museum. The structure, which was used to house the machinery that lowered miners into the shaft below, has not been open to the public for decades. (Journal photo by Lisa Bowers)

MARQUETTE — It’s been 175 years since United States deputy surveyor William Burt discovered a portion of the Marquette Iron Range, and the rest, as they say, is history.

Three years later, the Jackson Mining Co. began extracting ore from land that is now part of Negaunee. By 1875, that mine had produced 1.5 million tons of ore.

Since Burt’s discovery, several iron mines have opened and closed in Marquette County, including the Jackson Mine, the Cliffs Shaft Mine, the Mather A and B mines in the Negaunee and Ishpeming areas, and most recently, Cleveland-Cliffs Inc. put the Empire Mine in Richmond Township on indefinite idle, leaving CCI’s Tilden Mine in west Ishpeming the last iron mine standing.

The closure of a mine in Marquette County is perhaps more significant than elsewhere, considering it’s an area where digging minerals from the earth is more than just an industry, it’s also an identity. Several towns in Marquette County have had namesake mines including Michigamme, Humboldt, Champion, Republic and Gwinn. Many generations of residents grew up in company houses, which were structures built by mining companies to serve an influx of migrant workers.

Regional author Larry Lankton describes the conditions of such homes as a solid dwelling that expressed no individuality and had few frills.

“The worker knew that his job and the house were inextricably linked,” Lankton wrote. “Any problems with the boss, if serious, could result in a problem keeping the house.”

The Cliffs Shaft Mine Museum, which will mark the anniversary of the Burt discovery with an event today, also preserves some of the most iconic buildings that dot Ishpeming’s skyline.

The Iron Ore Heritage event will also mark the 100-year anniversary of the obelisk shaped A and B shaft head-frames designed by noted Chicago architect George Washington Maher.

A head-frame is a structure that houses mine shaft hoisting equipment and is also where miners would enter a cage to be lowered into the mine shaft at the beginning of their shift.

Each structure, which are mirror images of each other, measures 33 square feet at the base, with a pyramid roof bringing the full height to 96 feet 9 inches. They were built to reinforce the wooden head frames that serviced the two shafts.

During tours today, attendees at the Cliffs Shaft event will get a rare glimpse inside the A shaft head-frame, museum volunteer Mike Ilmonen said.

The A shaft head-frame is the safest of the two structures, Ilmonen said, because when Cliffs Mining Co. abandoned it, they chose to remove all of the equipment.

“For some reason, they chose to cut everything out of here,” Ilmonen said of the A head-frame. “Over in the B head-frame, all of the staircases, all of the necessary equipment to operate the mine, the skiffs, the cage, everything that went on over there is in there, so it would be extremely dangerous to even think about going inside there because some of that stuff has been there since the 1890s.”

He said the company capped the A and B shafts when the mine was abandoned around 1955 to the specifications required by law at the time.

Miners worked hard, museum volunteer Suzie Saari said, as did other members of their families. Many were immigrants from countries like Finland, Great Britain, Italy and France. Different languages made communication a problem, which added another layer to the adversity and sometimes tragedy that was just part of mining culture.

“My mother grew up in a company house, and my story is not dissimilar to other people in the area,” Saari said. “My great grandfather got killed in the Isabella (Mine) in ’26 and left six kids for my grandma to take care of. And that was — that happened a lot. They were either injured or people getting killed, and then there would be people lining up out the door (for a job) because they would be bringing miners out injured or dead.”

Cliffs Shaft may hold some of the most recognized landmarks in Marquette County, but Ishpeming, Michigamme, Republic, Negaunee, Gwinn and several municipalities across its broad expanse have painstakingly gathered and preserved remnants of area history.

Finnish historian Emppu Siltaloppi, who researched the immigrant experience in the Upper Peninsula in the early 1900s, notes the importance of historical preservation in an article published in the Dec. 14 edition of The Mining Journal.

Preserving that history, though, takes a contingent of volunteers, said Irene Ilmonen, a Cliffs Shaft Mine Museum volunteer, and those volunteers in many cases are an aging breed.

“Iron ore is the industry responsible that built these communities,” she said. “I think all of us have ancestors that worked in the mine. My father worked in the mine, my husband worked at the Mather B, my father worked at the Mather B. Mining runs through our veins. Now, with so many mines closing down and we don’t know what the future is, we have to save what we have and tell our story.”