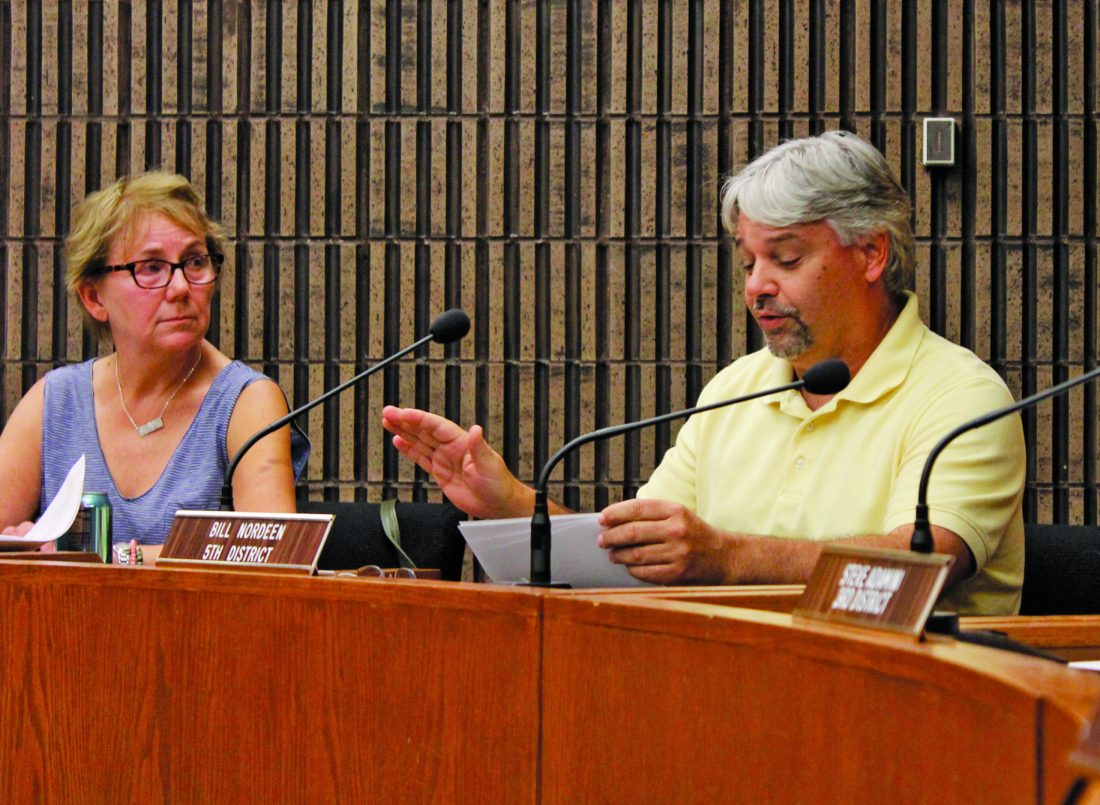 Marquette County Board Commissioner Bill Nordeen discusses the Military Airports Program grant during a special meeting held by the board Tuesday. (Journal photo by Trinity Carey)

MARQUETTE — At a special meeting Tuesday, the Marquette County Board of Commissioners approved an agreement for grant funding that will be used to improve hangars at Sawyer International Airport.

In two separate motions, the board adopted resolutions from the Federal Aviation Administration and the Michigan Department of Transportation-Aeronautics regarding the FAA’s Military Airports Program to enter into the grant agreement.

Vice-chairperson Joe Derocha was absent from the meeting.

The MAP grant will include several hangar expansions and upgrades throughout its five-year cycle at a total project cost of roughly $13.3 million.

The first project grant will fund the expansion of hangar 665, which serves as the maintenance repair and overhaul facility for Envoy Air Inc. or American Eagle Airlines at Sawyer. This funding will be about $1.225 million with a federal share of nearly $1.1 million, a state share of $64,600 and local share of $61,000.

At its regular meeting last week, the board voted against the grant due to financial risk in the amount of nearly $1.6 million and limited financial commitment from other parties involved.

Late last week, MDOT-Aeronautics committed to providing the traditional state share of 5% of the project cost or roughly $786,000. This commitment led the board to reconsider.

“This is an important piece of the puzzle that was missing at the last meeting and it’s still not an easy project for the county to take on, but it’s certainly worth doing from the staff perspective and my perspective,” said board Chairman Gerald Corkin.

The hangar expansion will ensure the continued employment of the 200-plus people who work at the Envoy hangar, said Manager Steve Rogers. Without the expansion, the company would not be able to service larger aircraft. This would ultimately lead them to move operations elsewhere.

“The scenario that probably would have played out is as the 50-seat airplane was retired at the conclusion of the life of that airplane, we would not have viable business in Marquette any longer,” Rogers said. “We could only fit one of the larger airplanes in the hangar and because of the size of the facility, it would not be economically viable to support one airplane. This will give us the opportunity to put up to four airplanes in the hangar.”

The local share of the grant projects to come in 2020-2022 is just over $918,000, board documents state. County staff recommended these funds come from the Delinquent Tax Fund. The board would also have to provide the federal share of the grant at a cost of nearly $1.2 million, which will be paid for from the General Reserve Fund and be federally reimbursed, explained County Administrator Scott Erbisch.

Commissioner Bill Nordeen voted against the FAA resolution to the agreement because he felt they pushed the board to make a decision too quickly, he said. Commissioners were made aware of the grant and had to vote on it within a week.

Despite Nordeen’s vote, he was in support of the project, but against the terms on which the board had to make a decision.

“To tell you the truth, I’m glad this is going to pass,” he said. “I’m glad it’s not my vote that had to decide whether this passes or not, but I’m trying to make a statement that the procedure is wrong.”

Commissioner Steve Adamini noted that a few years ago Envoy asked the board to pay for half of a new LED light system and that when the board said they didn’t have the funds, Envoy went ahead with the purchase themselves. He also noted that Envoy recently gave its employees a significant increase in their hourly wages — $3-plus an hour and is looking to hire a minimum of 20 more employees.

Corkin said the number of employees at Envoy was one factor that led to his approval of the grant.

“You have my support,” Corkin said. “I was concerned last week because the state wasn’t involved in it and I know it’s not going to be easy for the county, but we’ll make it work because 200-plus jobs are worth it.”

Officials said the county is still working with other potential partners such as the Michigan Economic Development Corp.