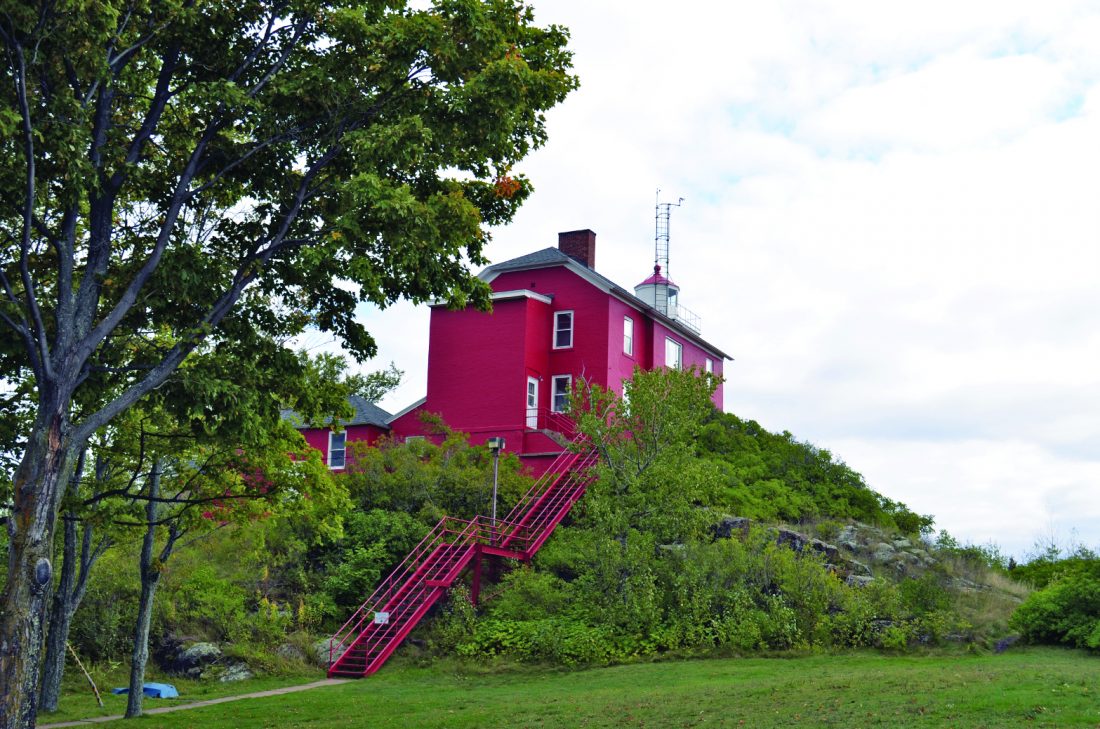 The Marquette Lighthouse is pictured Thursday evening during a ribbon-cutting ceremony for Lighthouse Park. (Journal photo by Cecilia Brown)

MARQUETTE — A little over three years after the property was transferred to the city of Marquette from the U.S. Coast Guard, the completion of the first phase of work at Lighthouse Park was celebrated with a ribbon-cutting ceremony held Thursday by the city.

Situated along the Lake Superior shoreline, the park contains the Marquette Harbor Lighthouse, a captain’s residence, and a former Coast Guard lifesaving station and storage garage.

Many of these structures were built in the late 1800s. The lifesaving station, which is “the last surviving lifesaving station building on Lake Superior,” was built in 1891, Marquette Mayor Fred Stonehouse said. The historic red lighthouse, built in 1866, is one of the oldest buildings in Marquette, he added.

“It’s an icon of the city of Marquette. And we had to do everything we could to try and save it,” Stonehouse told ceremony attendees.

The lighthouse and surrounding buildings are enduring symbols of the Marquette area’s rich maritime history that are important to preserve and make open to the public, Stonehouse said.

“Not only was history made here, but history still lives here,” Stonehouse said. “And the opportunity for people to come down to the site of the Lighthouse Park now, and see it, touch it, feel it, I think is absolutely remarkable and certainly a tribute to the city of Marquette.”

The adjacent Marquette Maritime Museum played a large role in saving the historic lighthouse, Stonehouse said, as the museum took on a long-term historic structures lease of the lighthouse from the U.S. Coast Guard and made multiple preservation and repair efforts before the 5-acre waterfront property was deeded to the city in July 2016.

Since then, the city has worked to make the park open and accessible to the public, hiring Sanders & Czapski Associates PLLC as a consultant on a land-use plan for the park. The Marquette City Commission unanimously approved the park plan in February.

The first phase of the project consisted of removing a portion of Coast Guard Road — a dirt road that previously was used for vehicle, foot and bicycle traffic — to add a paved bike path in the area where the road previously was; extending Arch Street to be used as the park’s main point of entrance; paving a parking area; and updating water and sewer utilities for the captain’s residence and lifesaving station building.

This work was completed around two weeks ago by Oberstar Construction, city officials said.

“The commission had set aside $1 million to begin this process,” Marquette City Manager Mike Angeli said. “I think we spent about $600,000 to get to this stage and we hope to use the balance of that to get through the captain’s house and start on some other things in these buildings.”

In the future, the city aims to revitalize the captain’s house and the lifesaving station for public use, as the needed utility work has been done for these buildings, Angeli and Marquette Community Services Director Jon Swenson said. The captain’s house is likely to be a short-term rental, tentatively slated to be completed by the middle of next summer, Angeli said.

“The idea behind these buildings would be something very public and something that brings in a little bit of revenue,” Swenson said.

Swenson said he realizes some area residents expressed concerns about the park and associated changes to Coast Guard Road, Arch Street and the bike path, but he feels “the back and forth has really been very public process that’s brought in a lot of people’s opinions and a lot of people’s thoughts.”

“And the resulting compromise I think is something that’s going to be just fantastic for the city of Marquette,” he said. “One of the biggest pieces of this was separating the vehicular traffic and the pedestrian traffic, and now we have a very safe, defined, delineated corridor for the pedestrians.”

Overall, the historic waterfront park will be a place for residents to enjoy, treasure and reflect upon for years to come, Stonehouse said.

“The city of Marquette has prided itself on having virtually 95% of this lakeshore publicly accessible, and this was a critical piece of that whole puzzle,” he said.

The park is open to the public during regular park hours. The lighthouse grounds are open and accessible to the public, but tours of the lighthouse’s interior are available exclusively through the Marquette Maritime Museum, city officials said.