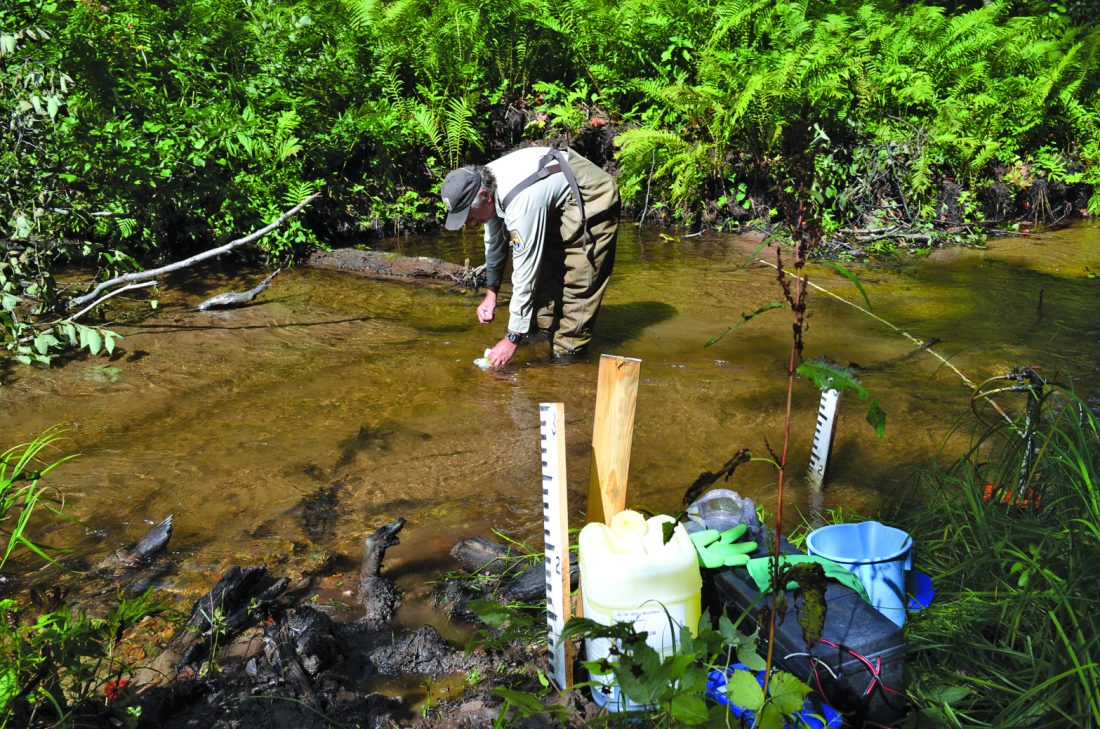 U.S. Fish and Wildlife Service Biological Science Technician Kevin Hensiak takes a water sample Tuesday during a lampricide treatment of the Bismark Creek. The crew administered lampricide and continually monitored concentrations in the creek for two 12-hour periods on Tuesday and Wednesday. This work is key to protecting the Great Lakes fisheries, U.S. Fish and Wildlife Service officials said, as lampreys have no natural predators in the Great Lakes and can destroy up to 40 pounds of fish each over their adult life. (Journal photos by Cecilia Brown)

MARQUETTE — A single sea lamprey can consume up to 40 pounds of fish during its adult life and has no natural predators in the Great Lakes. Due to this, the invasive species has the ability to devastate Great Lakes fisheries if left unchecked.

In an effort to control the lamprey population in the Great Lakes, staff from the U.S. Fish and Wildlife Service’s Marquette Biological Station has been applying lampricide to Great Lakes tributaries throughout the Upper Peninsula to prevent larval lampreys in streams from becoming “parasitic adults that migrate to the Great Lakes and kill fish,” USFWS officials said in a press release.

Sea lampreys are “parasitic pests” that attach to fish of all varieties with their suction mouth and teeth and are “so destructive that, under some conditions, only one out of seven fish attacked will survive,” according to the USFWS.

“They live as harmless larvae in the stream for three to four years before they actually grow that nasty mouth and go into the lake,” said Chris Gagnon, a supervisory fish biologist with the USFWS Marquette Biological Station. “We’re trying to kill them before they ever get out into the lake, turn into adults and start feeding on the big fish.”

When the lampricide is applied to a body of water, it can kill sea lamprey larvae that burrow in the stream bottom. Typically, streams are treated every three to five years due to the lamprey life cycle.

The USFWS and Fisheries and Oceans Canada, which are contracted for the work through the Great Lakes Fishery Commission, aim to keep the lamprey population “as low as possible,” Gagnon said, noting that in the 1950s and ’60s, “populations were at their peak.”

The Great Lakes Fishery Commission initiated the chemical control of sea lampreys in 1958 and since then, the “highly successful program has contributed significantly to the maintenance of the $7 billion Great Lakes sport and commercial fisheries,” according to the USFWS.

“We’ve reduced the population over 90% from what they used to be,” Gagnon said.

On Tuesday and Wednesday, a team applied lampricide to the Bismark Creek, a tributary of Harlow Lake, which is located near Marquette County Road 550.

The group had treated Bismark Creek, as well as the nearby Nash and Harlow creeks last year, Gagnon said, but unbeknownst to them at the time, a beaver dam was present in Bismark Creek and diluted the lampricide before it could go downstream. Staff discovered this after doing a regular post-treatment assessment of the creek, he said.

“Everything below this dam, they survived the treatment,” Gagnon said.

Due to this, crews returned this year, applying lampricide below the dam Tuesday, then applying it upstream of the dam Wednesday.

Lampricide was administered in a concentration of 3 parts per million, Gagnon said, with the team continually monitoring lampricide concentration throughout the stream during the two 12-hour application periods.

Prior to treating the stream, the group collected extensive data on the water chemistry and discharge to determine a safe and effective approach to the task, Gagnon said.

Preparing to administer the stream treatments can be a long process, he said, as it typically begins with crews assessing all tributaries to the Great Lakes for lampreys in the fall, then crunching the data over the winter to determine which bodies of water will require treatment. They also work with multiple state agencies to coordinate and plan the timing of the process, ensuring that lampricides won’t be applied during a sensitive time period, such as a large salmon run.

“When fish are coming from the lake to spawn, they’re pretty stressed out as it is just from spawning. So that has a possibility to lead to some non-target mortality,” Gagnon said. “That’s why we have a lot of streams that we treat at certain times.”

The lampricide takes advantage of physiological differences between lampreys and other stream inhabitants, he said, meaning it’s generally selective for lampreys and not harmful to fish, as fish are able to metabolize and excrete the lampricide much faster.

“They’re very prehistoric fish. (Lampreys) are one of the oldest fish that are out there. They just can’t excrete the (lampricide) as fast as most fish, so it builds up in their system,” Gagnon said.

While some may have concerns about the potential impact of lampricides on humans, the U.S. Environmental Protection Agency and Health Canada Pest Management Regulatory Agency concluded in 2003 that lampricides “pose no unreasonable risk to the general population and the environment when applied at concentrations necessary to control larval sea lampreys,” a USFWS press release states.

“However, as with any pesticide, the public is advised to use discretion and minimize unnecessary exposure,” according to the press release. “Lampricides are selectively toxic to sea lampreys but a few fish, insect and broadleaf plants are sensitive. Persons confining bait fish or other organisms in stream water are advised to use an alternate water source because lampricides may cause mortality among aquatic organisms stressed by crowding and handling. Agricultural irrigation must be suspended for 24 hours during and following treatment.”

For those who see lamprey activity in a stream, Gagnon recommends reporting it to the USFWS Marquette Biological Station at 906-226-6571, as new infestations have been discovered due to citizen reports in the past. For more information on the process, visit glfc.org or call 1-800-472-9212 in the U.S. or 1-800-553-9091 in Canada. TTY users can reach the Marquette or Ludington Biological Stations through the Michigan State Relay Service at 1-800-649-3777.