Company has significant commitment to recycling 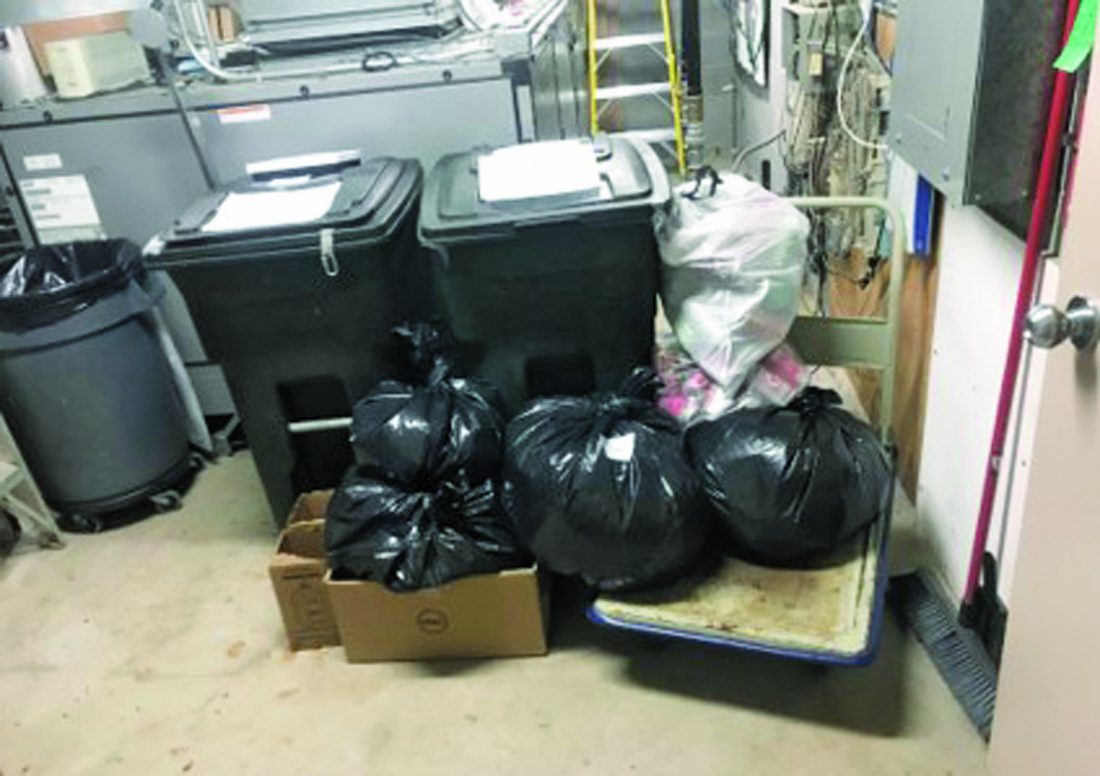 Recycling bins at the Vast insurance agency are pictured. The office, located along South Front Street in Marquette, has undertaken a variety of efforts to promote recycling through its Green Team Program, including biannual waste audits and offering convenient ways for employees to recycle batteries, rigids, fibers and returnable cans. (Photo courtesy of Vast)

MARQUETTE — There’s a vast array of activities that can be undertaken to make the workplace greener.

Actually, an example of this can be found at Vast, an insurance agency located along South Front Street in Marquette, where employees have banded together to form the Green Team, a “group of dedicated individuals who focus on reducing the carbon footprint of the Vast office and emphasize helping the environment through waste reduction, recycling, energy conservation and sustainability,” information about the program states.

The Green Team aims to promote the “reduce, reuse and recycle” philosophy in the Vast office through an array of efforts, including biannual waste audits, recycling batteries, rigids, fibers and returnable cans, as well as brainstorming other ways to reduce waste, Alison Neumann, Vast account manager, said in an email.

The program was developed through brainstorming sessions that began in November and the team was able to “hit the ground running” with its efforts in February, she said.

“We have people in our office of 50-plus employees who are passionate about the environment and in doing what we can to preserve it. Many of us didn’t like the fact that we were tossing items that could be recycled, like plastic, paper and cardboard. That’s a lot of waste that was going into our landfill that didn’t necessarily have to be,” Neumann said. “Most people are surprised on how something as minor and effortless as turning off the tap when you brush your teeth can save 4 gallons of water a minute. We’ve found that if something is easy to do, such as putting your paper or plastic items in a well-located bin, most people are on board, especially when we remind the team weekly with our Fun Green Facts.”

Since the program began in February, it has surpassed initial expectations, she said.

During an initial waste audit of the office in January, it was projected that around 10 pounds of material would be recycled each week, but by the end of July, the average weight of recycled materials each week was around 25 pounds, a 150% increase over the initial estimate, Neumann said.

Furthermore, she said the office has decreased its trash waste by 19% since January, and as of July the weekly diversion rate — which is the weight of the recycling divided by the combined weight of recycling and garbage — was 57%.

“Our projected diversion rate from January was 31%, so we are actually recycling at a 26% increase over what we initially projected,” Neumann said. “I would call this a big success for our office.”

This has been accomplished by providing employees with four inter-office recycling bins, two for rigids and fibers and two for returnable cans, as well as a box to collect batteries for recycling, she said.

It’s important to undertake green efforts such as this, she said, as “the more we can help the environment at a local level, the more we can keep Marquette County beautiful.”

For other businesses and offices that wish to begin recycling efforts, Neumann recommends researching “what is available to you and your business in your location,” as recycling programs for businesses can be implemented in a number of ways.

“Success in a recycling program comes through awareness of what kind of programs are available and excitement from the employers in implementing them,” Neumann said. “Having a team of people to help is a huge part, as is having support from those in charge of building operations.”