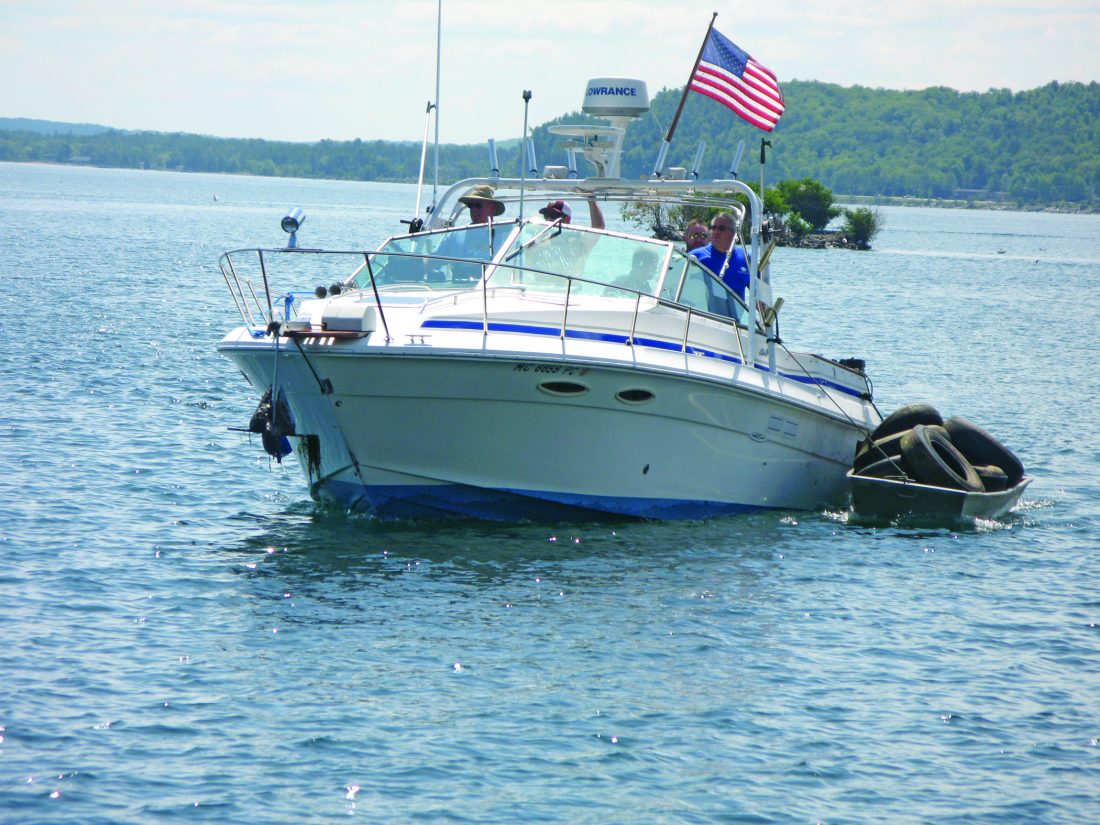 Tires are being hauled to shore at Mattson Lower Harbor Park on Saturday. Scuba divers and other volunteers pulled debris from Lake Superior in what is expected to be an annual event. (Journal photo by Christie Bleck)

MARQUETTE — Judging from the items pulled out from Lake Superior at Mattson Lower Harbor Park, it appears people have been coming in at night or in another clandestine way to dump all sorts of items that shouldn’t be in a lake.

Fortunately, residents and other people from downstate showed up on Saturday for an underwater cleanup at the harbor, hauling in items ranging from tires to car batteries to metal shelving.

Leading the event was Marquette-area resident Don Fassbender, who said the cleanup will be an annual event.

“It’s just insane how much stuff we got out of there,” Fassbender said.

It helped that many people showed up to help, including volunteers. Because of all that assistance, the event went smoothly, he said.

“The divers are doing the really hard work, bringing the tires and small pieces of trash up from the bottom,” Goodman said, “and we’re trying to get it in the dumpsters and get it taken care of.”

The event took place from mid-morning to late afternoon, but as of about 12:30 p.m., many tires already had been taken from the water.

“I know they have probably at least 30-plus tires right now,” Goodman said. “There’s actually an excavator down there that’s pulling some big industrial-size tires out from right off the breakwater.”

One of the volunteer scuba divers who removed trash from the lake was David Lowrey of downstate Portage.

“It’s nasty down there,” Lowrey said.

In fact, he said there was no reason for why some of the trash was in the lake.

And there was a lot of it.

“The debris piles are so massive,” Lowrey said. “I used 50-pound-weight lift bags. I had to take two lift bags to lift one piece of debris out, so that tells you how much weight is actually put into the water.

“So that means somebody had to actually take it out there. It’s not something that just fell off the shore and then tumbled down.”

He called the amount of trash “ridiculous.”

“There’s tons of concrete, anchors, anchoring blocks,” Lowrey said. “People seem to love up here 55-gallon barrels of cement filled in them. What is that about?”

Lowrey was particularly concerned about car batteries dumped in the lake since they pose a particularly bad environmental hazard.

Fassbender too marveled at how some of the items found their way into the harbor.

“It’s got to be in the middle of the night, you know?” Fassbender said. “There’s too many eyes on these docks and the water.”