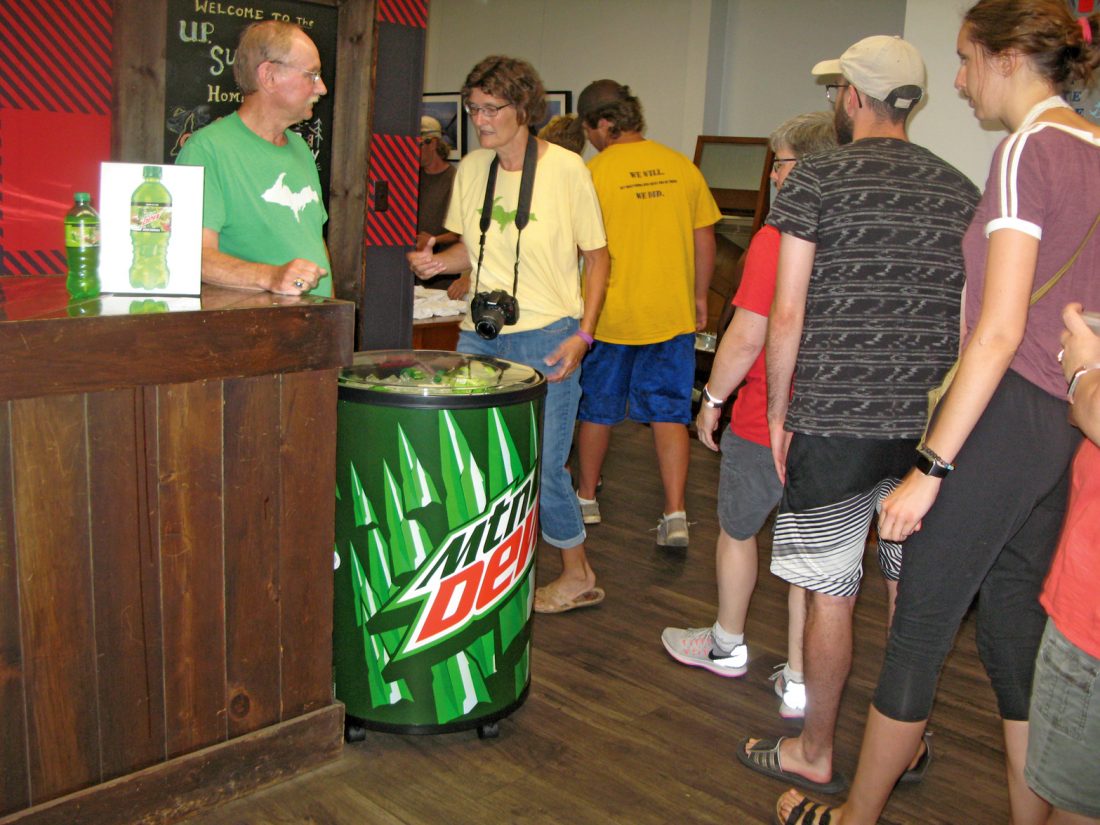 People line up to see the new customized Upper Peninsula label on Mountain Dew bottles on Sunday at the Upper Peninsula Supply Company. The beverage company created the labels to make up for mislabeling the U.P. as part of Wisconsin in its DEWnited States map. (Journal photo by Christie Bleck)

MARQUETTE — Justin “Bugsy” Sailor, owner of the Upper Peninsula Supply Co., said he always wanted a line outside the door of his business.

He got that on Sunday afternoon when the custom Upper Peninsula labels on limited edition bottles of MTN DEW, better known to some people as Mountain Dew, was unveiled at his Washington Street store.

The event served as a make-up of sorts when Mountain Dew in July mislabeled the U.P. as part of Wisconsin on its DEWnited States map.

So, the company created a special U.P. label, with special bottles given away at Sunday’s Mountain Dew Upper Peninsula Bottle Reveal at the U.P. Supply Co., along with Lawry’s mini-pasties. People who came through the door had a chance to take home one of the limited edition bottles as well as U.P.-branded gear.

Nicole Portwood, vice president of marketing at Mountain Dew, was one of the company’s representatives on hand.

So, Portwood said she worked with Sailor and other U.P. residents to design the labels to celebrate what makes the region so great. The labels include the Mackinac Bridge, a snowmobiler, a kayaker, waterfalls and the U.P. landmass itself.

Portwood said the limited editions are not for retail sale.

“We made them specifically to give away to people up here,” she said. “I think they’re going to be more like collector’s items because you won’t be able to buy these in stores.”

The company also was scheduled to make a stop at the Upper Peninsula State Fair in Escanaba today through Wednesday to further display the special bottles and have other activities.

Sailor noticed the original geographical mistake, which he said U.P. residents often see, and “put it into the world” via Twitter.

“I saw that tweet just blow up, like people didn’t stop retweeting, and it was the most viral social media post that I’ve ever been part of,” he said.

The gaffe didn’t seem to bother the many people at Sunday’s label reveal.

“It’s pretty incredible that we can have an event like this at a small little shop in Marquette,” Sailor said.