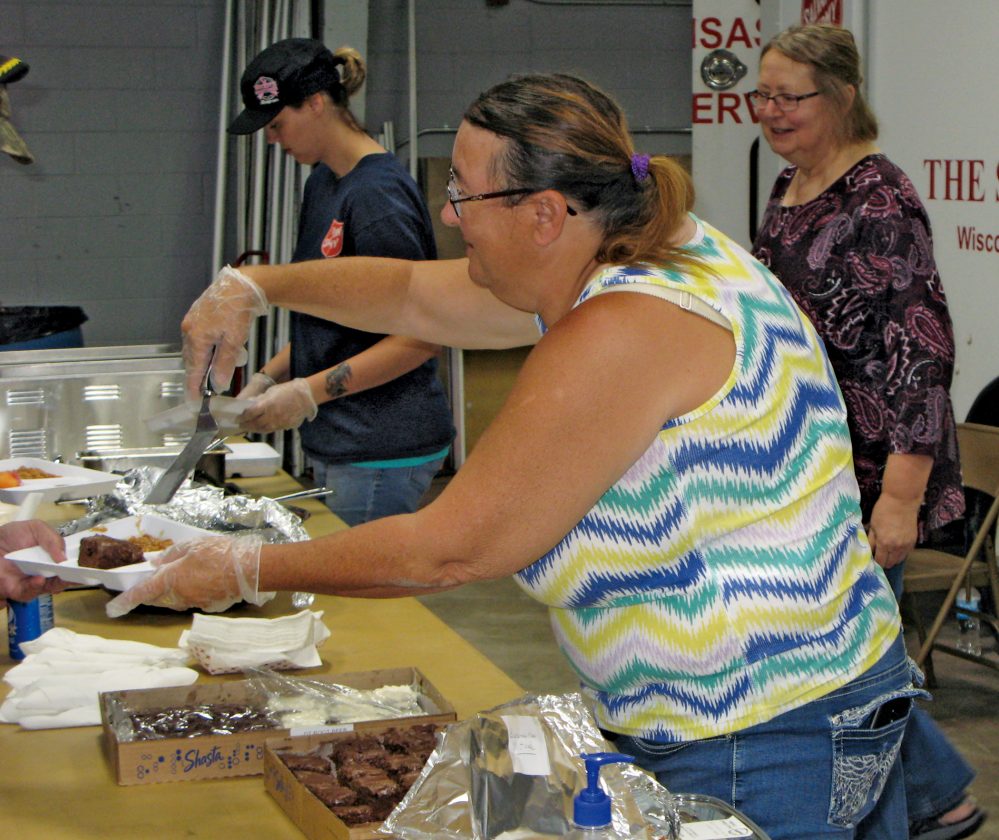 Salvation Army EDS Crew Chief David Rushford hands a resident her food at the temporary shelter. Over 1,000 meals have been served at the shelter since a July 30 fire at Pine Ridge forced residents to evacuate. (Journal photo by Lisa Bowers)

MARQUETTE — Two important questions hang in the air like wisps of smoke that just won’t clear. What caused the fire on July 30 at Pine Ridge Apartments in Marquette, and when can the 145 displaced residents return home?

Complex issues prevent those questions from being answered.

Marquette City Fire Department Capt. Greg Guertin said during a Monday phone interview that the cause of the rooftop blaze “is still undetermined.”

Marquette County Emergency Management Coordinator Teresa Schwalbach said while water and other utilities have been turned back on at the nine-story Marquette Housing Commission complex, there are still safety concerns, including air quality and when the elevator will resume operation.

Roughly 35 residents remain in a temporary Red Cross shelter, which was relocated from Northern Michigan University’s Superior Dome to Lakeview Arena on Saturday. The rest of the residents from the 140 income-based apartments are staying with family and friends while others reside at area hotels. 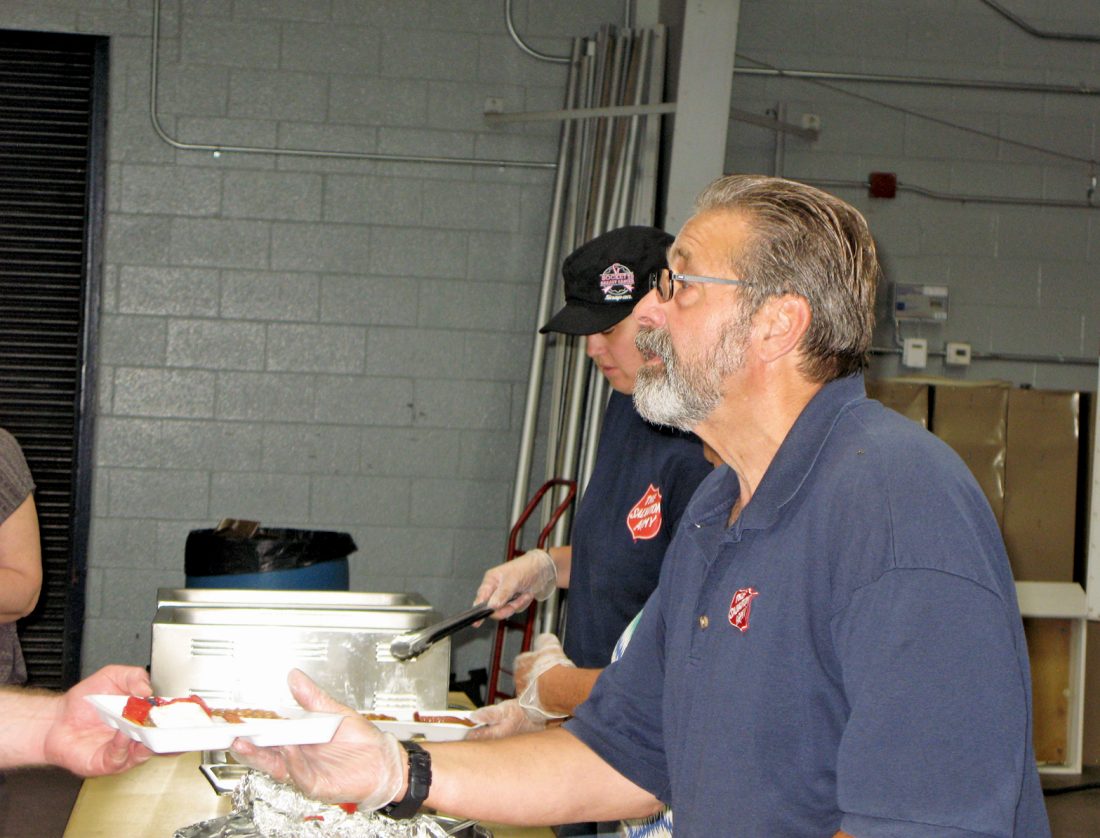 Salvation Army EDS Crew Chief David Rushford hands a resident her food at the temporary shelter. Over 1,000 meals have been served at the shelter since a July 30 fire at Pine Ridge forced residents to evacuate. (Journal photo by Lisa Bowers)

Residents were permitted to go back to their homes Monday and today to retrieve more of their belongings and are expected to take a trip to Walmart on Wednesday, Schwalbach said.

“We are just status quo now,” Schwalbach said. “We want it to be safe for the residents who return there.”

A third question the public has been asking since the day of the fire is: “How can we help?”

Emergency response organizations are still working to ensure that all displaced residents have everything they need, and they are asking for the help of the community.

Capt. Doug Winters of the Marquette and Ishpeming Salvation Army said his organization remains committed to supporting the residents as long as necessary.

“The answers just aren’t there, but we are all, the Red Cross included, in this and will work through until we have some answers,” Winters said. “We understand it’s not a short-term problem. There are multiple steps and multiple inspections that have to happen, so it is a multi-step process.”

The Salvation Army has supplied 1,000 meals to those occupying the shelter as well as Red Cross volunteers over the course of the last seven days, Winters said, a task that would be made easier with the help of the community.

“Businesses that sponsor meals really take some of the burden off of the Salvation Army and the volunteers,” Winters said. “Our volunteers will still be there to serve the meal, but as far as food preparation, it would just help a lot. We are working really hard and I just want to make a statement of appreciation for the volunteers, they even take on the burden of cooking a meal and if some of the restaurants take that on, it really helps alleviate some of the pressure on our volunteers.”

Some of the area businesses that have already stepped up include Vango’s Pizza and Cocktail Lounge, Jandrons Fine Jewelry, Iron Bay Restaurant & Drinkery, Big Boy and the Casa Calabria, Winters said.

“In addition to that, another big sponsor is J.P. Electric. They have purchased a lot of our food already,” he said. “And it would be wonderful to have other donors.”

Any business interested in sponsoring a meal for Pine Ridge residents who are living in the Red Cross shelter can call the Salvation Army at 906-226-2241.

Winters said any donation is helpful, even the smallest ones from individual residents in the community.

“If they want to donate anything from a package of cookies to a case of pop; anything that they think the residents would want,” he said. “Get that to us and designate it for Pine Ridge residents, and we can bring it to the shelter. And another thing is, we are serving 35 to 40 people three meals every day, so any monetary donations would be wonderful as well.”

Those donations, Winters said, can be dropped off at the Salvation Army locations at 1009 W. Baraga Ave. in Marquette and 222 Division St. in Ishpeming.

Those wishing to help the residents can also make donations to a special account at River Valley Bank named MHC Pine Ridge or donate directly to the American Red Cross. Local grocery store gift cards are also being accepted at the Lake Superior Village office at 125 Dobson Place in Marquette between 11 a.m. and 2 p.m. Monday through Friday.

“It is an encouraging message to the give the community, how everyone is stepping up,” Winters said. “And I would like to go on the record as well that the Red Cross has done a fantastic job of organizing and maintaining control over the shelter and communicating. Hats off to them, they are dealing with all of that and I think they are just doing a bang-up job.”

The Marquette Housing Commission was contacted, but could not be reached for comment for this story.