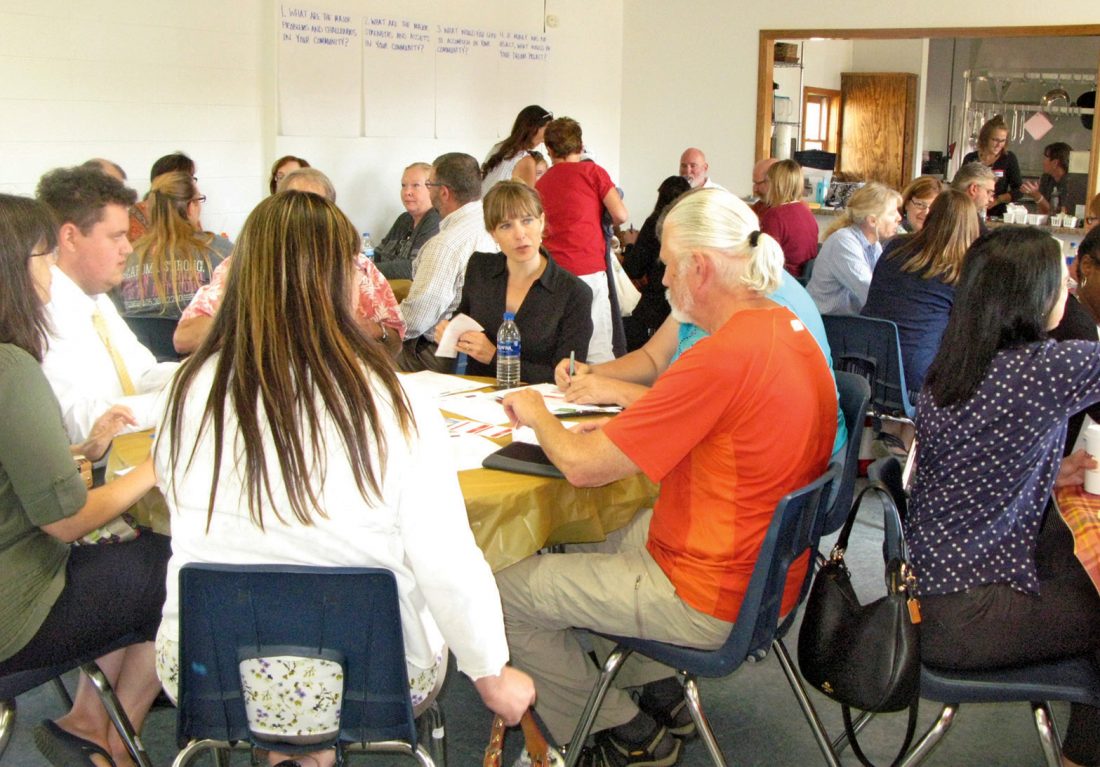 Business owners, service providers, community officials and educational leaders gather at 9:06 Community Church at K.I. Sawyer to discuss the future of the former U.S. Air Force base. Focus groups discussed topics such as problems, strengths and solutions regarding the area. (Journal photo by Christie Bleck)

K.I. SAWYER — The emphasis of community focus group meetings about the welfare of K.I. Sawyer was on solutions instead of problems.

The Community Foundation of Marquette County, the K.I. Sawyer Community Alliance and the University of Michigan’s Poverty Solutions on Thursday hosted focus groups at 9:06 Community Church. The church is the former Sawyer Community Center that closed in 2018 because of a lack of funding — an event that might be considered symbolic of the former Air Force base’s challenges.

The base officially closed in 1995, and although it’s home to Sawyer International Airport, residences and businesses, many abandoned buildings remain, adding to the area’s blight.

“Our plan here is to continue the work of our Common Future Committee, where we come into communities and ask how we can help you help your community,” said Gail Anthony, chief executive officer of the CFMC.

The focus group consisting of business owners, service providers, educational leaders and community officials broke into small groups to discuss major problems and challenges, strengths and assets, what they want to accomplish in the community and, if money were no object, what their dream projects would be.

Facilitating the session were Jon Wisniewski, a Sawyer resident who has experience with state agencies in Lansing, and Ruth Solinski, who is part of the Common Future Committee.

“We’re going to attack problems and not people,” Solinski told the participants.

Wisniewski emphasized not making the event a gripe session.

“It’s so easy to stay focused on the problems, but let’s put forth some solutions as well,” he said.

Participants represented a variety of agencies and organizations, including Forsyth Township government, Michigan Works! and Gwinn Area Community Schools, among others.

The breakout groups during the session often had overlapping answers to the questions posed to them.

Their list of problems and challenges included transportation, lack of community involvement, different housing standards, public safety, poverty and a lack of volunteerism.

There’s much the participants indicated they want to accomplish at Sawyer, and one of the top ones was dealing with the vacant housing, with more buildings torn down a possible solution.

Another wish was a bigger grocery store. The Sawyer Village Shoppette is located along Voodoo Avenue, but they expressed a need for a regular-sized but affordable store.

Of course, forum participants also had their dream projects, with one of them being turning blighted areas into viable green space. Again, the demolition of dilapidated buildings was mentioned, but also listed were a kids’ sports complex and a shuttle to transport residents to and from the area to alleviate the transportation problem — with Sawyer being relatively isolated from other towns and cities in Marquette County.

The day’s events, however, weren’t just about holding a meeting, listening and then forgetting about what was discussed.

“We also do a call to action for the people that want to help with the specific themes,” Anthony said.

Following the session, participants interested in being active in various areas, such as transportation and recreation, gave their contact information to stay involved.

Anthony said such a process already has taken place in Ishpeming, and she expected the results at Sawyer to be similar.

“Those leaders will show up, and then they will have meetings to get the things done that they want,” Anthony said.

Kristen Kerecman, director of communications and public engagement with Poverty Solutions at the University of Michigan, said the program tries to connect with communities across Michigan to understand unique challenges and opportunities regarding poverty.

“This turned out to be something we wanted to be part of and support,” Kerecman said of the focus groups.

She noted the Michigan Department of Health and Human Services has asked Poverty Solutions to listen to Michigan residents about their experiences with benefits and similar topics.

Anthony said another focus group was to meet on Thursday at a meeting immediately following the first one, with community residents as the participants. A “dialogue dinner” was scheduled for that evening to delve more deeply into what the groups had discussed.

“You can see people want to do something,” Anthony said.