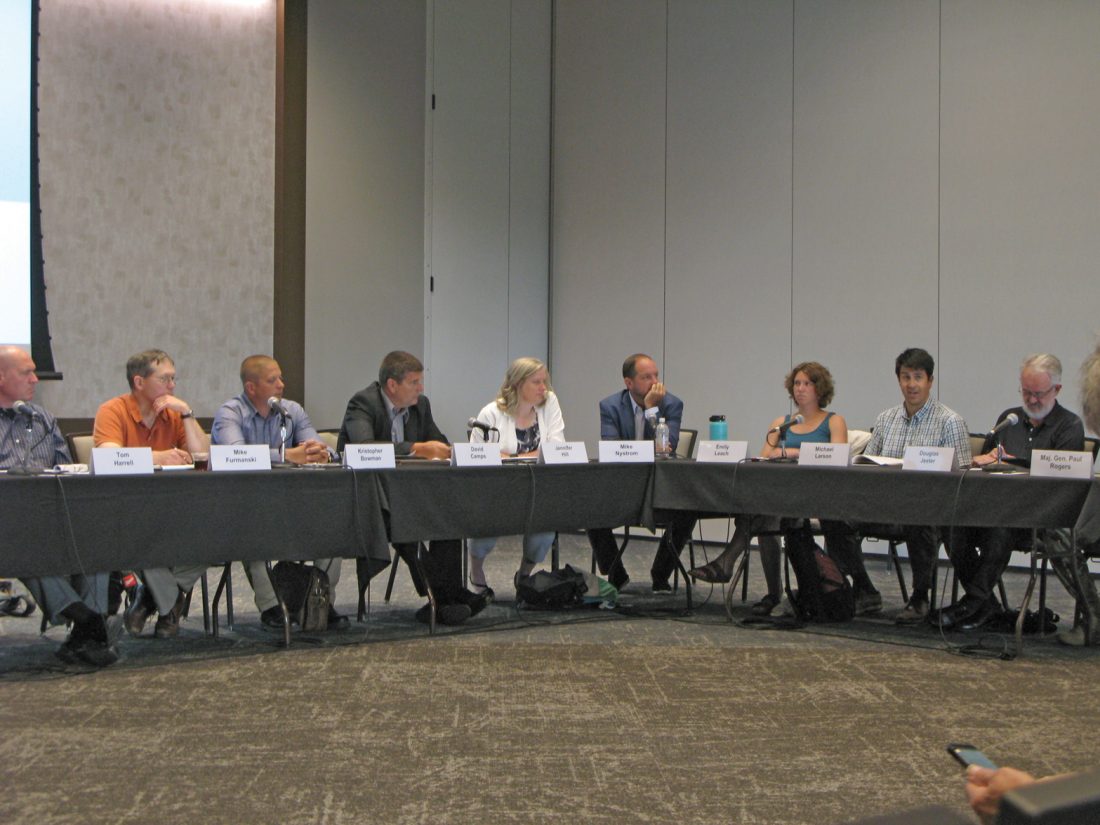 Members of the Upper Peninsula Energy Task Force meet on Tuesday for the first time at Northern Michigan University in Marquette. The meeting set the groundwork for the 19-member committee, and delved into its first task, which is finding possible alternatives for propane and natural gas delivery to U.P. homes. (Journal photo by Lisa Bowers)

The 19-member panel appointed by Gov. Gretchen Whitmer in June is tasked with assessing the U.P.’s overall energy needs and how they are currently being met, according to a June 7 press release.

The initial meeting allowed members, 12 of whom are from the Upper Peninsula, to introduce themselves to the rest of the panel. It also laid the groundwork for how future meetings will be conducted and included presentations and background information from studies already conducted on energy, and more specifically natural gas and propane.

As part of the assessment, Scripps said the panel recommended a “formal contingency plan for the deliverability of propane to the Upper Peninsula.”

He said, in terms of home heating, natural gas is overwhelmingly the choice in Michigan, with 76% of homes heated by natural gas, 10% by electricity, 8% by propane and 3% by wood.

Those percentages differ by region, Scripps said, with 18% of Upper Peninsula homes heated with propane.

“And if you look at the breakdown, in the Keweenaw and the eastern U.P., more than a quarter of those homes are heated by propane,” Scripps said. “These regional differences matter a lot in terms of how people heat their homes.”

He said a propane shortage in the winter of 2013 and 2014, which sent prices skyrocketing to nearly $5 per gallon, was especially notable in the U.P. where there was an unplanned shutdown of Line 5 in addition to planned maintenance on a key pipeline in Wisconsin, which feed the fractionator in Rapid River.

“We use propane in a number of ways, we think of it as home heating, we also use it for crop drying. And we had an increase of 450%. A late corn harvest that was very wet, and that required a lot more propane than we normally use,” Scripps said. “So going into the heating season, our reserves were well below even the minimums of a five-year range. There were essentially three overlapping issues. So we had to go further than the U.P. for propane. Usually we get our propane in the Upper Peninsula. Rapid River produces more than what we need. You shut that down and you have to go to Conway, Kansas — the second largest hub in the country — but that is affecting everybody else the whole Midwest, and some of the pipelines that actually serve were offline and the rail disruption was exacerbating that.”

The MPSC, which regulates all investor owned energy utilities such as electric and natural gas, does not regulate the propane industry.

Michael Nystrom, executive vice president and secretary for Michigan Infrastructure and Transportation Association, and task force member told the panel that more information specific to U.P. propane usage should be collected prior to the next meeting.

“I gotta say that we need to dive into this really quick, I really do. And, with that, between now and Aug. 5, I think the staff really does need to focus on some information that’s helpful for us on propane in the U.P. For me to see what’s happening in Detroit, quite frankly that’s not why I am sitting here,” Nystrom said. “We can sit here and create a report that’s already been created time and again and they are sitting on shelves in Lansing all over the place. We’ve been tasked with focusing on energy in the U.P. We need to get focused on that right away. I think it’s going to be quite hard to get all of the information put together that we need that is specific to the U.P., but that’s what we need to have in front of us in order to make recommendations ultimately.”

Task Force Chair Leisle Eichler Clark, who is also the director of the Michigan Department of Environment, Great Lakes and Energy, agreed that more information specific to the Upper Peninsula needed to be collected.

“You heard from both (MPSC) Chairman (Sally) Talberg and Commissioner Scripps that the propane industry is not regulated,” Clark said. “With non-regulation comes a real lack of data. So what we needed to do is start with the data that we have, and so the survey that was done as part of the Statewide Energy Assessment was a critical grounding component of what was in front of us. There is quite a lot of date that was necessary to move forward.”

Scripps said the unregulated nature of the industry is an issue, and asked task force members to come up with specific questions that state officials could ask propane providers.

“The more specific we can be with the questions, the more fine-tuned the data we can bring back,” Scripps said.

The task force is tentatively planning its next meeting on Aug. 5 in St. Ignace, and will set dates in September, October and November which will include public listening sessions at that August meeting.