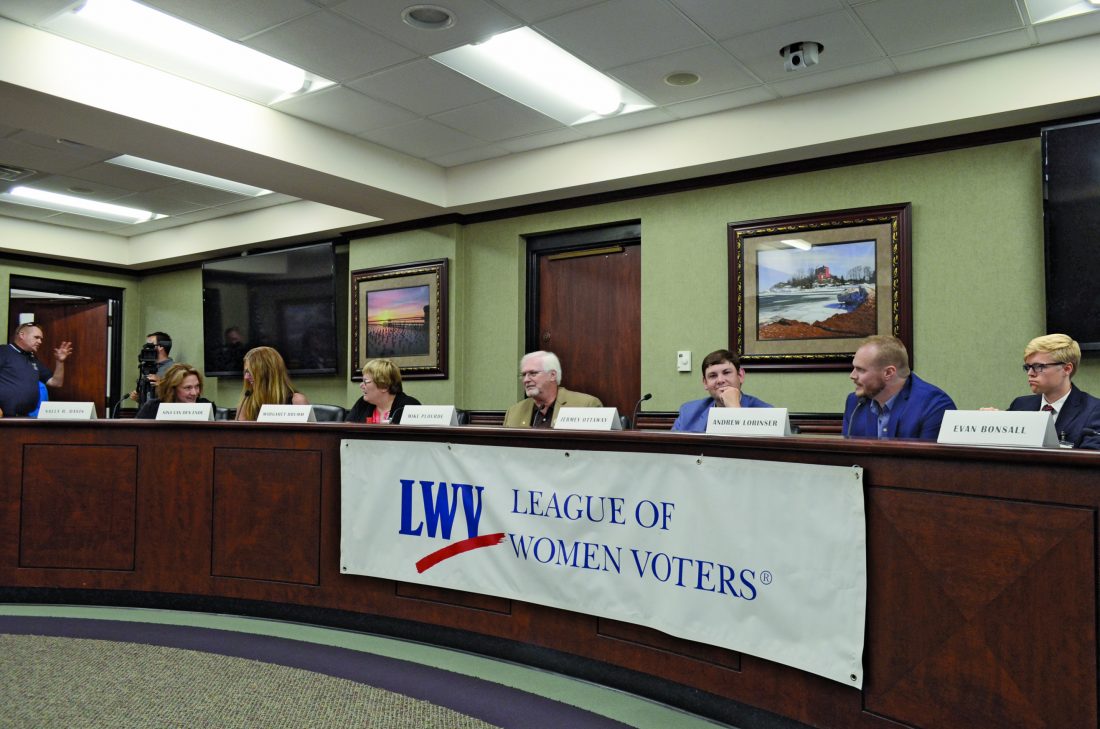 MARQUETTE — Voters had a chance to hear from seven of the nine candidates running for two open Marquette City Commission seats during a candidate forum held Wednesday evening by the League of Women Voters of Michigan, Marquette County Member-At-Large State Unit.

Barrett Engle and write-in candidate Cody Mayer were unable to attend and submitted statements to be read at the close of the forum.

The four candidates receiving the most votes during the Aug. 6 primary election will proceed to the Nov. 5 general election, where voters will determine the two candidates to fill the open seats.

They will serve three years on the commission. Commissioners are limited to two consecutive terms.

Dozens of people attended the forum, filling Commission Chambers at Marquette City Hall. Attendees were able to submit questions to be asked by forum moderator Darlene Allen, unit leader of the local LWV chapter. Candidates had one minute to answer each question.

Questions touched on issues ranging from lakeshore development and affordable housing, to climate change, homelessness, budgets and the city’s approach to marijuana businesses.

To remain fair and neutral, The Mining Journal has featured each candidate’s answer to the forum’s final question, listed in the order of response.

The question was: “What do you feel is the most important issue facing Marquette in the next two years?”

Ottaway: “It’s pretty simple. It’s budget and infrastructure. At a local government standpoint, that’s always of utmost importance because those are the things that can be controlled by this commission. I know that everyone that lives in Marquette probably drives on roads that are bumpy. I live just off Altamont (Street) and it’s horrible. They fixed, like, a piece of it, and I’m like: ‘You’ve got to be kidding me. Fix the rest of it already.’ So number one for me is we have to figure out a way to get more money to fix these projects. If you’re not aware of what the city currently does, at the beginning of the year they get every department together and kind of plot which jobs are the most important for the year. Well, a lot of times, projects like Lakeshore Boulevard come up and the money that was going to go to Altamont Street goes to Lakeshore Boulevard now because there’s grant money. So we need to figure out a way to spend more money on our infrastructure. That is number one for me and I hope that that’s something we can accomplish because our roads are crumbling, just like the rest of the state of Michigan. Salt kills them.”

Lorinser: “Just to reiterate all that, I think we all probably agree some of the top priorities of the city is to find ways to repurpose land to generate tax revenue that was lost from some of the big contributors in the past who have helped sustain this city. But Marquette is changing and I believe a big thing will be to develop a direction and identity that we can all agree upon. That’s something that is difficult to do. We think Marquette is a very unique place, but it’s also really distinct from door to door, from house to house. There’s so many different perspectives (on) what does Marquette look like in the next 20 years? So we’re talking about responsible development, we’re talking about shoreline and trail protection, affordable housing. These are all really big issues. I don’t know if there is a number one, but if there’s three, I’m ready to tackle all three of them.”

Bonsall: “There are so many important issues facing the city: how we’re going to find more revenue to fund some of these major infrastructure projects we have coming up; how we’re going to adapt to a changing climate, as candidate Davis mentioned; and how we’re going to find more tax revenue and balance the budget. But, ultimately, I think that the central issue that all of these things depend on is our ability to retain young people and working families, especially families with children, here in Marquette. So many people are getting priced out of the city right now by rising housing costs and many people also — many of my friends included, and family — cannot find good jobs that they can support a family on here in Marquette. So I think that absolutely has to be our top priority, finding ways that we can create economic opportunity for young people and help people of all income and education levels try and find ways to make housing more affordable here in the city. I think that if we can do that, we’re going to have a solid foundation for our future. And we’ll find that it’s easier to generate new tax revenue, it’s easier to find funding, it’s easier to find solutions to these problems.”

Davis: “Budget. It’s one of the four main jobs of the commission and I think our budget is very essential to be diligently studied, especially in the next four or five years: the lost revenue from We Energies and from tax tribunals; we are paying off $5.5 million in bonding this year, but we’re also going to bond for $5 million, it’d be nice to reduce some of that. That, and I believe that we really need to take a look at the vacant properties that we have, and work with potential developers and businesses and probably need to incentivize them to do what we want them to do. And we talked about a lot of those kind of things, so I am going to leave it right there because so much has already been said.”

Van den Ende: “Again, my big issue would be the budget, working on the budget. When I looked into the city’s debt, it has spiked considerably in the last five years, the long-term debt for the city’s at $147 million. Per capita, that’s about $7,000. That means each one of us owes $7,000. So that has spiked a lot in the last five years. So that was one of the reasons also that I met with (City Manager) Mike Angeli to ask him questions about that. And what he explained to me is he doesn’t see it as being an infinite spending. Right now there’s a spike in spending because of the infrastructure we’re seeing around town with the pipes being redone and different costs. For example, the hospital: the city had to pay for the roundabout for the new hospital and pay for the new municipal building. But the hospital is currently paying us back, that’s separate from the abatement that the hospital got. So we are being reimbursed currently for those. I like looking into these issues.”

Brumm: “The issues that my colleagues have come up with about the lakeshore, long-term development, reducing debt, have already been discussed in great detail. My number one concern for the next two years is to spend time and effort in attracting new businesses to come to Marquette that will provide a more stable, diverse workforce, more opportunities for jobs for young, old, medium people, and more opportunities to put Marquette on the map as a destination place — not just for tourism — but for small businesses. The isolation I grew up with here in Marquette has been alleviated by the internet and even Federal Express can come to your doorway. But we spend a great deal of time on environmental advertising and I believe we need to switch gears in the next two years and spend our time on economic advertising telling people Marquette is a great place to build your business.”

Engle: “I would like to thank the League of Women Voters for the opportunity to speak during this candidate forum. I wish I could have been in attendance, but I had a work conflict. I have grown up in a family that has tried to give back to our community: volunteers, masons, shriners, labor unions, athletics, music, arts and culture. It is who I am and I wish to make the city commission a part of that. I am running for city commission because I want to be a servant to the constituents of the city of Marquette. I will fight for affordable housing, properly-maintained parks, fields and rinks and opportunities for our youth to find careers in our community. I aim to keep Marquette as the best town to raise a family. I think the city should be looking to find new revenue streams such as legislating sales of marijuana. We must also find solutions to the homelessness issues that we face by providing those individuals with opportunities of shelter, a warm meal, counselors and job training so they can pull themselves up and become valuable members of our workforce. Thank you again and I hope you will consider me for your next Marquette city commissioner.”

Mayer: “Good evening. First off, Cody would like to thank the organizers and moderators for putting this event on. What an excellent opportunity for city residents to hear from their city commission candidates. Cody planned on attending this forum, but service calls and he is currently away on military orders. He was born in Sault Ste. Marie, Michigan, and is a member of the Sault Tribe of Chippewa Indians. He married the love of his life and high school sweetheart, Ashley Mayer. Cody and his wife Ashley are both Marquette residents. He is currently a senior at NMU, double-majoring in economics and public administration. Cody has devoted his life to serving his community and country, which is why at 17 years old, he enlisted into Michigan’s Army National Guard. He has been an enlisted soldier for almost five years now and currently holds a rank of sergeant. Cody is a youth leader in the community as the student body president of Northern Michigan University, representing and leading over 7,000 students while working closely with faculty and administrators on numerous committees. As president, he has focused on four key areas: youth voice, voting rights, assisting NMU’s veteran students, campus mental health and connecting NMU with the Marquette community. Cody is committed to serving our community, and as a youth leader who knows how to get things done, it is time for the next generation of leadership. Write in Cody Mayer for city commission this August primary.”

For those who couldn’t attend the forum, it can be viewed online at the League of Women Voters of MI, Marquette County Facebook page. It can also be viewed at http://lwvdeltacounty.org/Marquette_County_Unit.html and www.marquettemi.gov/elections.

To see candidate responses to questions prepared by the league, find your polling place, view your ballot and more, visit Vote411.org.

For more information on the LWV, which is a nonpartisan political organization aiming to inform voters, visit http://lwvdeltacounty.org/Marquette_County_Unit.html or the local league’s Facebook page.