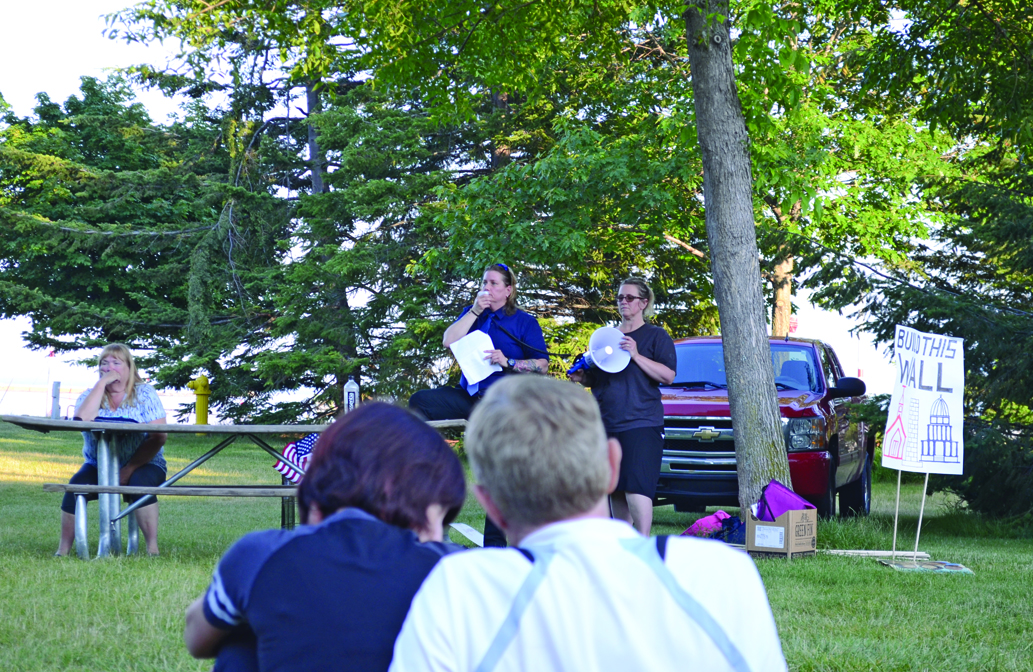 Attendees watch as P.J. Stephens, activist and U.S. Army veteran speaks to the many people who gathered at Friday night's Lights for Liberty Nationwide Vigil to End Human Detention Camps at Mattson Lower Harbor Park in Marquette. Prior to the 9 p.m. candlelight vigil, attendees had a chance to listen to speakers as well as stand up and share their own views on the topic. The vigil in Marquette was one of hundreds held around the nation and world Friday evening, which aimed raise awareness and inspire action. (Journal photo by Cecilia Brown)

MARQUETTE — Lights were lit. Signs expressing grief and anger were held alongside signs professing hope for love and unity. Songs were sang and impassioned speeches were shared as dusk drew near at Ellwood A. Mattson Lower Harbor Park in Marquette.

This was the scene Friday evening, which was part of the Lights for Liberty Nationwide Vigil to End Human Detention Camps. Those who gathered in Marquette Friday joined thousands of others who held their own Lights for Liberty vigils across the world.

The vigils, which aimed to raise awareness and inspire action, were held in nearly 600 locations throughout five continents by a coalition of grassroots activists “dedicated to human rights and the fundamental principle behind democracy, that all human beings have a right to life, liberty and dignity,” organizers said.

The vigil began with local musician Jason Elsenbroek playing the song “Motherless Child,” setting a somber, reflective tone for the multiple speakers and community members who would share their views about the conditions facing thousands of migrants in U.S. human detention camps before a silent candlelight vigil was held at the close of the event.

P.J. Stephens, an activist and U.S. Army Veteran who spoke at the vigil, urged area residents to “protest the inhumane conditions faced by migrants” detained in the United States and take action.

“Now is the time for every person to stand up and say we will not accept this,” Stephens said. “No more hesitation. No more denial. No more fear. We need to be bold and loud and unrelenting. That’s the only way we can stop this.”

Stephens and many others said the conditions migrants face in detention centers can include overcrowding, assault and a lack of access to essential items, such as clean water, medicine, bedding, soap, showers and toothbrushes.

“Unbelievably, children as young as 4 months are taken from their parents,” Stephens said. “Medicine is confiscated and medical care withheld. LGBTQ and disabled individuals are held in solitary confinement.”

Stephens also emphasized the need to recognize that many migrants at the southern border are legally seeking asylum in the U.S. due to violence and unrest in their Central American home nations, and after a long and dangerous journey to the U.S. border, many face yet more danger.

“Across this country, we have witnessed acts against people fleeing persecution many of us thought we would never see in modern times,” Stephens said.

Local attorney Robert Anderson also urged the need to recognize the legality of what many migrants are trying to do, but are being detained for at facilities along the U.S. border.

“It is worth noting that every word of that U.N. Declaration of Asylum Rights is word for word now in the U.S. Code 1158,” Anderson said. “A person who is physically present in the country of protection — the United States in our case — can be a protected refugee and obtain asylum protection if he or she fears persecution, risks (due to) religious, political opinion, nationality (or) to be a member of a particular social group.”

Anderson explained that when Central Americans cross the border into the United States and seek border guards to declare their request for asylum, it “triggers all of their rights” as asylum seekers.

“But even if Central Americans can get their case before a judge, the chances of getting approved unfortunately are very, very slim, less than 20%,” Anderson said.

“We have policies that exist from the roots of colonization that extend to what we’re dealing with today,” he said, noting the parallels among today’s treatment of Central American migrants, WWII-era internment camps for Japanese Americans, and the displacement and detention of indigenous people in the U.S. that occurred for hundreds of years.

Reinhardt told the audience that it’s critical to recognize the land we stand on was first the land of indigenous people, and that decolonization is a crucial step toward healing.

“We have to reclaim the indigenous identity here to deal with that orignal sin,” he said. “We have to decolonize our minds and our hearts, or we will never, ever be able to deal with these kind of bad policies and bad people in our country.”

Overall, Stephens emphasized that, as Americans, “we cannot allow these atrocities to be perpetuated in our name.”

“Under the American promise of those stars and stripes, we have guaranteed them the right to seek refuge from tyranny and persecution,” Stephens said. “We of the affiliation of American citizens take upon ourselves the civic responsibility and moral obligation to speak up for those whose voices have been silenced and ignored.”

To learn more about Lights for Liberty, which was created by a “loose coalition of grassroots activists, with support from long-standing immigrants’ rights organizations and other organizers,” visit www.lightsforliberty.org.