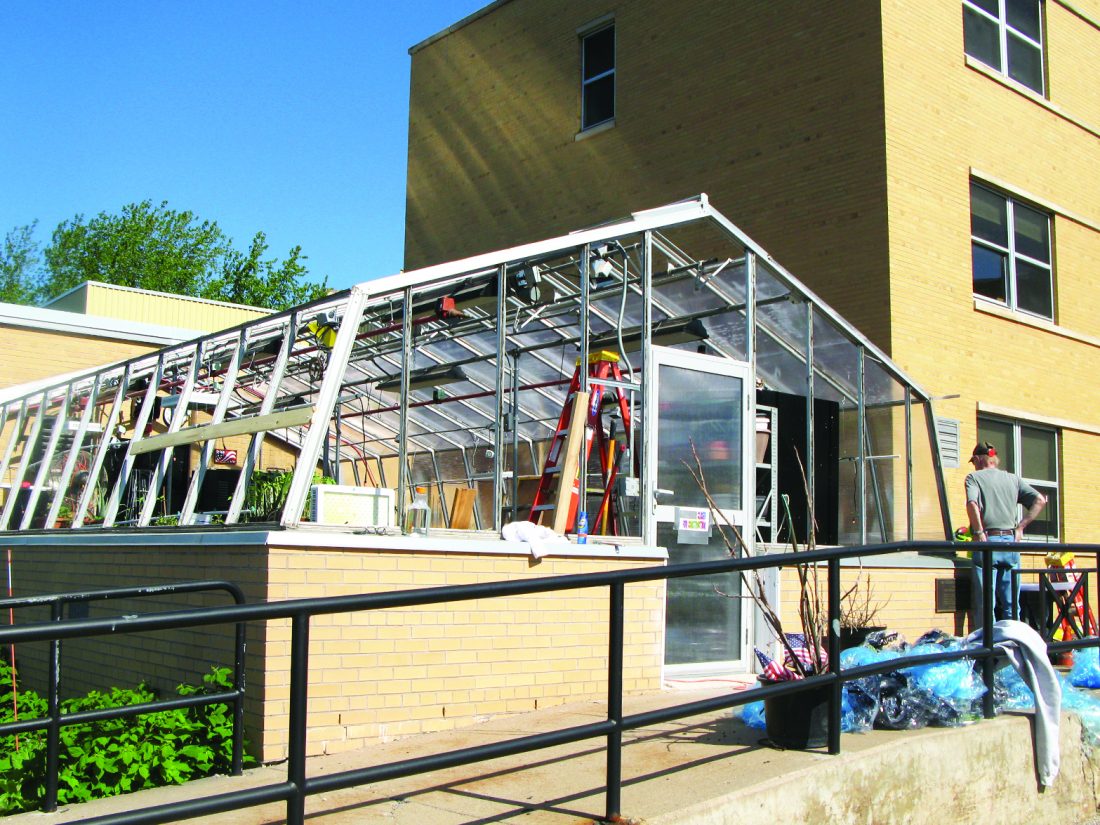 Volunteers put on a new exterior at the greenhouse at the Jacobetti Home for Veterans. Plants are maintained in raised beds and other areas at the home. (Journal photo by Christie Bleck)

MARQUETTE — The weather finally might be getting warm enough to put plants in the ground without the fear of an overnight frost bringing their young green lives to a premature and withered end.

So, since things are greening up in the region, many projects are underway to take advantage of the beginning of the growing season — and they encompass wide age ranges and abilities.

They’re also just not about making sure mid-summer hamburgers have homegrown onions to put on them.

They’re about teaching sustainability and giving people a purpose.

And they’re taking place in greenhouses and hoop houses — basically sheltered environments that use solar radiation to trap heat, which can be a rare commodity in the Upper Peninsula.

A greenhouse can have a hard exterior, while a hoop house typically has a plastic roof wrapped over a flexible structure of hoops.

Steve Finley was volunteer coordinator for a June 8 “re-skinning” of the Shiras Greenhouse at the Jacobetti Home for Veterans, helping to put on a new polycarbonate exterior.

The greenhouse has existed since 1985 following a donation from the Shiras Institute. However, it needed some renovations.

“What we had originally was glass,” Finley said, “and the glass was beginning to break and literally fall into the greenhouse. With this new material, we’re running 12-foot sheets, and that means that there’s going to be nothing that will fall in, and we get a greater insulation value.”

Spring is a busy time of year at the greenhouse, with it being home to a variety of flowers and vegetables.

Jacobetti veterans have started to come in and pot their own vegetables and flowers, plus the greenhouse also acts as a storeroom for the outdoor materials, said Finley, who noted the Michigan State Police donated grow lights for the facility.

The recent project was funded, he said, through money donated by a Lansing man, who recently passed away.

The greenhouse is used the entire year, but now it’s easier to do so because of the new exterior.

“What we could not do previously was truly use it year-round because of all the leaks and the damage,” Finley said.

Some plants, however, grow outside, and need a bit of tending throughout the growing season.

Veterans who live at the home maintain raised garden beds near the greenhouse where they grow things like onions, chives and Jerusalem artichokes. A pruned apple tree stands among the crops.

One of those vets, who toils in the beds despite being on oxygen, is 91-year-old Marvin Mains.

“I help them whenever I can,” Mains said.

Weeding is part of his botanical contributions.

“That one was full of weeds,” he said, pointing to one of the beds. “I got that all cleaned out.”

On a sunny day, though, working on the plots might be preferable to being indoors.

Teaching Family Homes of Upper Michigan, or TFH, based in Sands Township, is a residential facility where children and families in need are taught self-sufficiency, among other attributes.

One of those attributes is growing some of their own food right on the property.

To that end, June 8 served as Garden Day where Dan Perkins, owner of the Ishpeming-based Perkins Construction and director of the urban Ishpeming garden known as Partridge Creek Farm, helped renovate the TFH greenhouse. He also donated vermicompost for the nearby enclosed garden, where the youngsters pitched in, working the soil and installing plants.

“What we’re trying to do is get our gardens in tip-top shape, getting them running so the kids can take that ownership and pride in their own food, and then just see how their food’s growing, learn the vocational skill of gardening,” Raske said.

The youngsters planted bush beans, peas, peppers, pumpkins, basil, raspberries and strawberries, she said, as well as melons “because they take on the heat.”

Raske, who credited Partridge Creek Farm, Great Lakes Recovery Centers and the Queen City Seed Library with helping with donations and time, said every Friday will be the big TFH gardening day during the growing season.

Local schools even make use of the greenhouse/hoop house concept.

For example, Graveraet Elementary School maintains a small hoop house behind the school.

“Just maintaining our hoop house is a big part of our fourth grade,” Maura Stone, a fourth-grade teacher at Graveraet, told The Mining Journal in a March article. “I feel super lucky that we have it here; the hands-on learning you can do with planting and sustainable green living, it really opens their eyes to where food comes from.”

The students work in the hoop house throughout the school year.

In early June, students from Gilbert Elementary School in Gwinn planted flowers and vegetables that had been started in the Forsyth Senior Center greenhouse, which is in its fifth year.

“Everything was grown in the greenhouse from seed,” Veale said.

Those seeds were put in the soil during the last week in March, he said, and already are good-sized.

A place for research

The Upper Peninsula Research and Extension Center in Chatham, whose land was purchased by Michigan State University in 1899, has been conducting agricultural research throughout the years. In 2014, U.S. Department of Agriculture funding was obtained to start a farm business incubator program.

Here people who want to start or expand a farm business can access land and technical assistance for up to five years, said Abbey Palmer, North Farm education coordinator.

The North Farm is part of the UPREC.

“One current focus for research here is organic vegetable production in high tunnels — which varieties perform best and which approaches to season extension result in an extended season for marketing produce,” Palmer said in an email.

For instance, she noted spinach was planted in the high tunnel in October, overwintered under a frost blanket within the hoop house and reached harvestable size in March when there were feet of snow on the ground.

“There are several approaches to season extension at different scales — everything from a hoop in your garden you could jump over to a large-scale commercial building,” Palmer said. “Each different type of structure has its own costs and benefits.”

People can schedule a tour of the farm by contacting Palmer at palmerab@msu.edu.

Located on the west side of the Jacobetti Complex at Northern Michigan University along Hawley Street is the NMU Hoop House Community Garden, which serves as a collaborative learning center for people who are curious about their food and where it comes from.

Overseeing the effort is Susy Ziegler, Ph.D., associate professor and head of the Department of Earth, Environmental and Geographical Sciences and associate dean of the College of Arts and Sciences.

Students, though, are primarily in charge of volunteering.

As with many hoop houses, a variety of plants are grown. At NMU, they include radishes, peppers, lettuce, kale, tomatoes, scallions, onions and something new: garlic.

Potatoes were started this spring in a felt bag, and are thriving.

The NMU Hoop House also has a practical aspect.

“Over the years we’ve had culinary students working with basically practicing their chopping and slicing and dicing, all their knife work, but not necessarily consuming the produce,” Ziegler said.

Several summers ago, she said produce started to be sold to NMU Dining Services, and although that didn’t provide nearly enough of the food it needed, the effort served a purpose.

“It is really neat to be able to say that students, or people on campus, can eat food that’s grown right here on campus,” said Ziegler, who pointed out local restaurants have made use of the produce as well.

For example, tulips were planted inside along the back of one hoop house wall in March and April, and Ziegler said they started to come up when snow still was on the ground.

A sunflower also came up on its own and is growing well.

Outside garden plots by the hoop house include a pollinator garden and spots where crops such as rhubarbs and strawberries were planted, she said. Of course, the area is fenced, so white-tailed deer can’t get in what Ziegler called a demonstration garden.

Theoretically, the Yukon Gold potatoes started in the felt bag “container garden” can be moved outside once the danger of frost has passed, she said.

The NMU Hoop House has an educational value, particularly for people used to getting their food in a grocery store.

“I’m always amazed at how often people don’t know what food looks like when it’s growing — what vegetables look like, or what it feels like to harvest a carrot, and then to eat it fresh like that,” Ziegler said.

The hoop house is available to people who want to experiment and learn. For details, email hoophouse@nmu.edu.