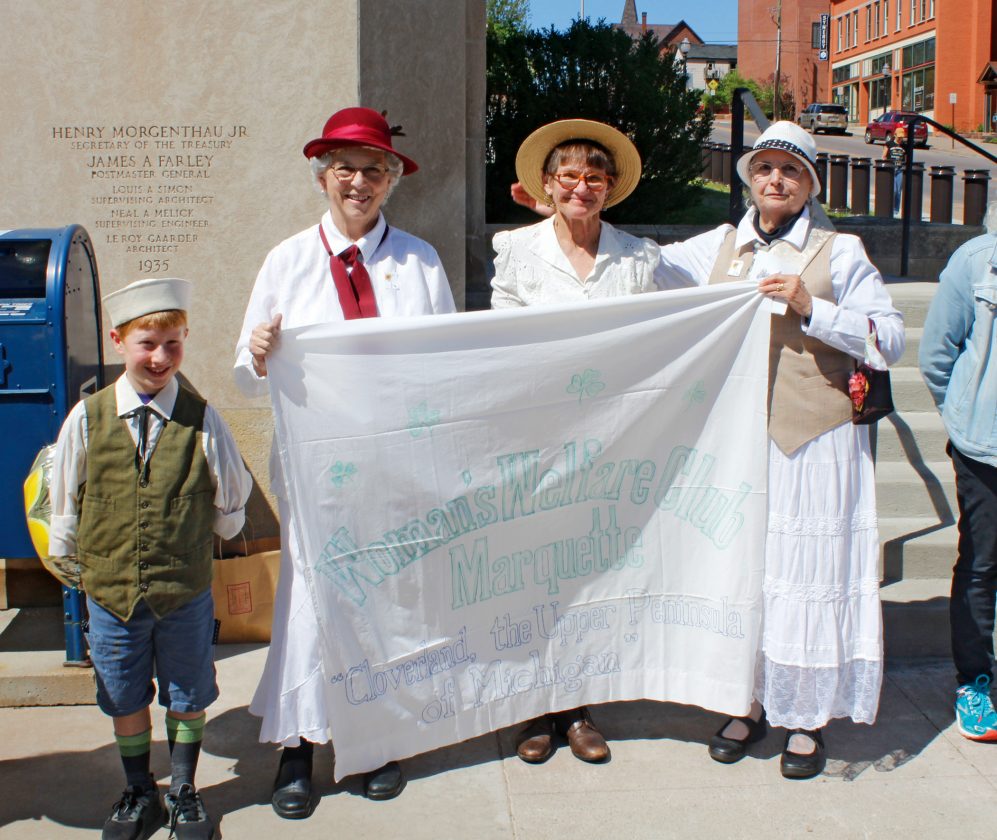 From left, Eero Rutz, 8, Jill Lamere, Sue VanderVeen and Fran Darling hold a sign for the Women's Welfare Club of Marquette, a club from the early 1900s that worked toward women’s suffrage, at a rally held Monday afternoon in downtown Marquette to celebrate the 100th anniversary of the 19th Amendment. (Journal photo by Trinity Carey)

MARQUETTE — On June 10, 1919, Michigan became the third state to ratify the 19th Amendment granting women the right to vote. Community members celebrated women’s suffrage Monday afternoon with a rally in front of the U.S. post office, located along Washington Street in Marquette.

Community member Carolyn Hietamaki organized the rally in just four days after learning the significance of the date.

She didn’t want the day to pass by unnoticed, she said, even “if I had to stand out here by myself, because having the right to vote gives you so much. You get to have a say in policies and changes out there and rights which we didn’t have before.”

While the 10th marked the 100th anniversary of the constitutional right in Michigan, the fight for women’s suffrage began in 1848 when suffragists demanded they be able to vote at a women’s rights convention in Seneca Falls, New York.

“So these people back then, they started the future,” Hietamaki said. “They gave us our everyday life because of what they fought for.”

After 72 years of fighting, the U.S. House of Representatives approved the amendment on May 21, 1919. The U.S. Senate followed suit and passed the amendment on June 4, 1919, leaving it to the states for ratification. Thirty-six states had to adopt it for it to become law. Ratification began with Wisconsin, Illinois and Michigan and on Aug. 18, 1920, Tennessee became the 36th state. The following day the 19th Amendment — which states “The right of citizens of the United States to vote shall not be denied or abridged by the United States or by any state on account of sex” — was signed into law, according to the Women’s Suffrage Centennial Commission.

For Hietamaki, the amendment gives her a voice about what’s happening in the world.

“If you can imagine if you didn’t have the chance to go vote or to say, ‘I don’t like the way this is going,'” Hietamaki said. “We have never had to do that because people have given that to us because it came in 1919, so we take it for granted.”

The rally offered an open space for education and communication for people from all walks of life.

The League of Women Voters, a nonpartisan organization that provides voter information to communities to educate and engage them in democracy, was also present at Monday’s rally to recognize the historical accomplishment, said Darlene Allen, chair of the local League of Women Voters chapter.

“It’s really nice to see other groups gather together to celebrate the right to vote and celebrate our democracy,” Allen said. “It means a lot to the league that there are different people that are engaging in this process and care about it.”