Event aims to mobilize, educate, incentivize community on eliminating Styrofoam use in restaurants 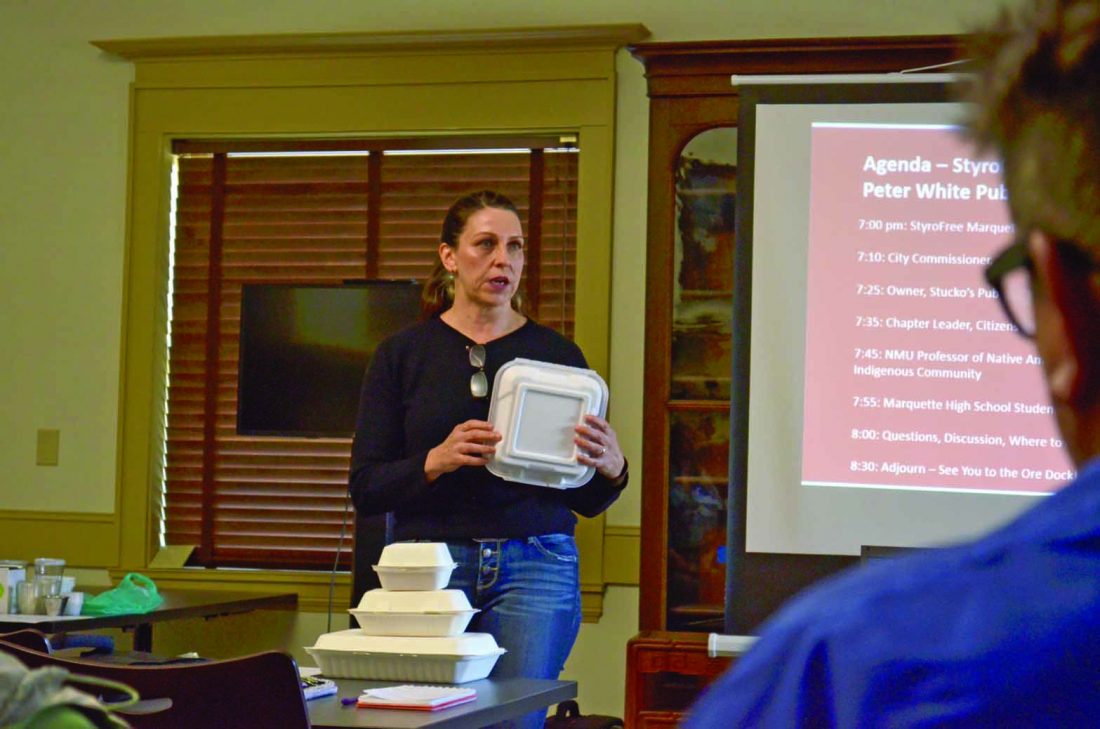 Sonia Stucko, owner of Stucko’s Pub and Grill along Third Street in Marquette, shows attendees of Wednesday’s Styro-Free Marquette event at the Peter White Library a non-Styrofoam container that she uses in her business. Stucko told attendees about financially feasible ways that restaurants can make the switch from Styrofoam and single-use plastics. Styro-Free Marquette aims to eliminate the use of Styrofoam in local restaurants through offering education and incentives for restaurant owners, officials and area residents. (Journal photo by Cecilia Brown)

Editor’s Note: This is part one of a two-part series on Styro-Free Marquette. Look for part two in next Monday’s Living Green article.

MARQUETTE — A lot can happen when individuals band together in an effort to make changes in their community.

On Wednesday, many gathered at an event held by Styro-Free Marquette to discuss reducing the use of Styrofoam in local restaurants by educating and mobilizing area residents, officials and business owners.

“There are at least 100 cities in the United States that have banned Styrofoam,” Styro-Free Marquette organizer Ron Carnell said. “The difference with us is we don’t want to ban it. We just want to incentivize and educate and get folks to come along willingly.”

It’s important to stop the use of Styrofoam, which is commonly used in to-go cups and containers, as it can be detrimental to human health and the environment, Carnell said.

Styrofoam can take up to 500 years to decompose and breaks up into particles that can “very easily enter the food chain via many vehicles — including the shoes on our feet — and get into waterways, where we can have it in wildlife and fish,” Carnell said.

Carnell, who moved to Marquette from Seattle last summer, was inspired to start the movement after he noticed many area restaurants used Styrofoam. He became concerned about the prevalence of its use so close to Lake Superior, one of the largest and cleanest freshwater resources in the world.

Carnell began talking to others in the community — as well as restaurants that used Styrofoam — about the issue. He was able to connect with many like-minded individuals who wanted to help local restaurants stop using Styrofoam by offering incentives and education.

Several of these individuals spoke at Wednesday’s event to offer a variety of perspectives and advice on how to make the Styro-Free Marquette dream a reality.

Sonia Stucko, owner of Stucko’s Pub and Grill along Third Street in Marquette, told attendees about how she swapped out Styrofoam and single-use plastic containers for more sustainable alternatives.

While it may seem cost-prohibitive for some business owners, Stucko emphasized that prices of Styrofoam alternatives have decreased. Furthermore, “shopping around” and offsetting costs with eco-friendly and cost-effective changes in other processes can make it financially feasible and may even reduce overall costs, she said.

“These are just simple things that I’ve done in my business that I’m more than willing to share with other businesses,” Stucko said. “I don’t want any other businesses to think I’m cramming anything down their throat, but I just want to share this because it’s important to me. I have a 10-year-old daughter and I want to do what’s best for Marquette and the lake that I live nearby.”

Kristen Carlson, leader of the local Citizens Climate Lobby chapter, spoke about CCL’s approach to addressing climate change, which is “similar to the positive pressures that customers and consumers can put on restaurants and other businesses to discontinue the use of Styrofoam and other single-use plastics.”

“Plastic pollution, like climate change, is a global issue and the two are intertwined,” Carlson said.

April Lindala of Northern Michigan University’s Native American Studies program told attendees about the importance of thinking seven generations ahead — and how this applies to reducing the use of Styrofoam and other single-use items that can contaminate the environment.

“The Earth is not made up of resources, it is the source. That’s how we ask our students to think, that’s how I ask you to think as our community, as our society. And remember, that we, as two-legged nations, we’re only one small piece of the pie,” she said. “We have four-leggeds to remember, we have the winged to remember, we have those who swim, those who crawl, we have stone nation, we have forest nation, we have plant nation. They all depend on us to make the right decision and embody the right behavior.”

Marquette City Commissioner Jenn Hill, who was not speaking on behalf of the city, educated attendees on how to mobilize the community around an issue such as going Styrofoam free.

A big step is identifying local leaders and business owners with “decision-making power” to meet with, as well as “reaching out to the wider community,” for support with petitions, letters to the editor and word-of-mouth communication, Hill said.

Overall, she said, one of the biggest avenues for making change is to vote.

“Your individual decisions matter,” she said.

John Thomson, a senior at Marquette Senior High School who serves on the school’s student council, spoke at the close of the event about his own experience mobilizing and informing high school students on Styro-Free Marquette.

He gave presentations at his school and brought a petition for fellow students to sign, collecting hundreds of signatures in support of Styro-free Marquette.

“The issue with the environment is something that we’re going to have to deal with. And the sooner that my generation and the people that are my age understand that, the easier it’s going to be to handle the issue,” he said. “I have a group, and I have a lot of people behind me in Marquette that are ready to take something on (and) get rid of Styrofoam. They’re all for it.”

Carnell looks forward to the next steps in making Marquette Styrofoam free — and in the meantime, he encourages restaurant patrons to keep talking to restaurant owners and asking for Styrofoam alternatives.