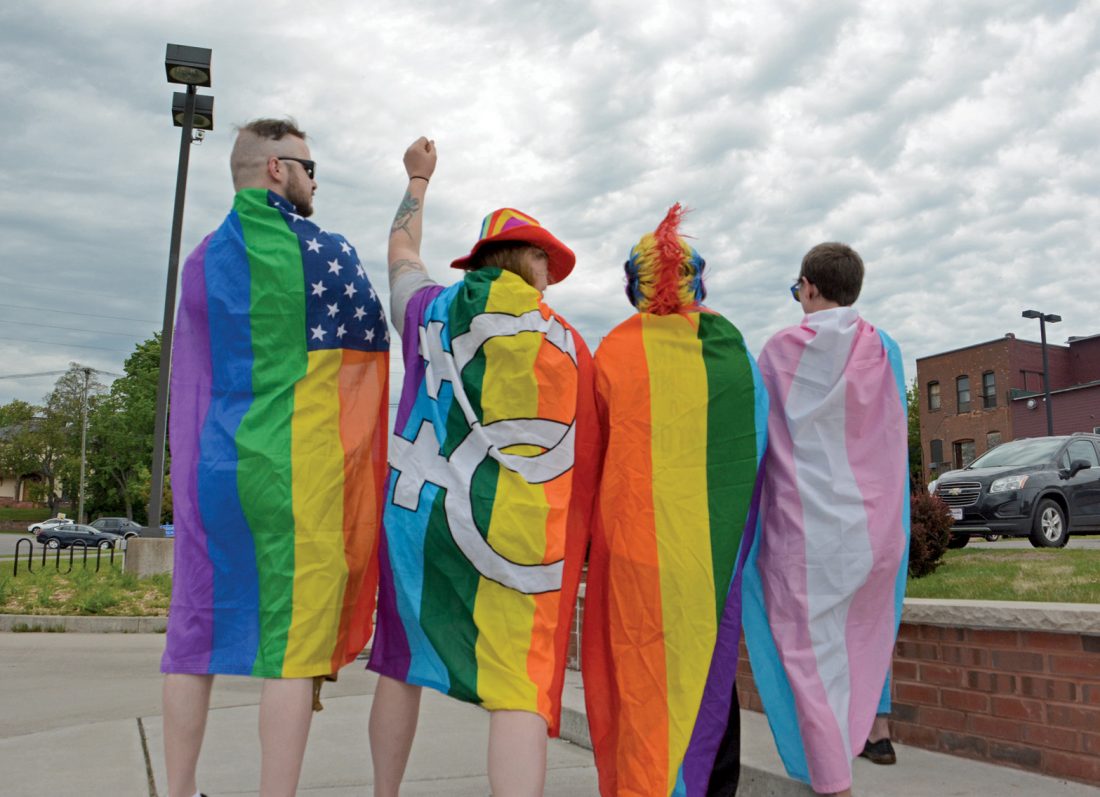 Revelers celebrate the Upper Peninsula Rainbow Pride Festival in 2017 to express support of the Lesbian, Gay, Bisexual, Transgender, Queer, Intersexual, and Asexual, or LGBTQIA+, community. The Marquette City Commission on Tuesday unanimously passed a proclamation declaring June as Pride Month in the city of Marquette. Pride Fest is set for Sept. 14 at Tourist Park in Marquette. (Journal photo by Corey Kelly)

MARQUETTE — It’s officially Pride Month in the city of Marquette.

A proclamation declaring June as Lesbian, Gay, Bisexual, Transgender, Queer, Intersexual and Asexual, or LGBTQIA+, Pride Month was unanimously approved by the Marquette City Commission at its Monday meeting.

“It is imperative that young people in this community, regardless of sexual orientation, gender identity and expression, feel valued, safe, empowered, and supported by their peers and community leaders,” the proclamation states.

This is the first time the city has officially recognized Pride Month, said Commissioner Jenn Hill, who made a motion to approve the proclamation and worked with the Marquette-based 501(c)3 Upper Peninsula Rainbow Pride to bring the matter before the commission.

“Marquette does have a non-discrimination ordinance on its books that was passed five years ago, but we hadn’t made the effort to recognize Pride Month,” Hill said.

June is recognized as Pride Month by communities around the nation to commemorate the Stonewall Rebellion in New York City, which took place 50 years ago this month, on June 28, 1969.

“This is a national event that happens in June,” Hill said. “And the timing is that this is the month that folks in New York City started to say ‘No, you can’t just push us around and say that just because we’re different, you’re going to treat us differently and discriminate against us because of who were are.'”

With the passage of the proclamation, the mayor and commission “urge residents to recognize the contributions made by members of the LGBTQIA+ community and to actively promote the principles of equality and liberty,” as the city is “dedicated to fostering acceptance of all its residents and preventing discrimination, harassment and bullying based on sexual orientation, gender identity and expression,” the proclamation states.

The proclamation is a significant move toward further visibility, acceptance and safety for those in the LGBTQIA+ community, said Marissa Jayne Wolfe, a U.P. Rainbow Pride founding member, noting the group extends its gratitude to the commission for passing the proclamation.

“People need to know we are working to become a safe community and this is a huge step right here,” she said. “And one of the things it does, is it raises visibility. There is no shame in being visible and being yourself. There is absolutely no shame in being yourself. And that’s why pride is so important and that’s why this proclamation is important.”

However, it is important to recognize that LGBTQIA+ individuals can still face many obstacles, Wolfe said.

“We’ve come a long way, but we still have a long ways to go,” she said. “Discrimination does happen.”

Heidi Gould, an administrative assistant for the Marquette Unitarian Universalist Congregation who attended the meeting, said she was glad to see the proclamation move forward, noting “we stand on the side of love and really promote and advocate for the rights of everybody.”

Overall, Wolfe said she wants the community to be a safe and welcoming place for LGBTQIA+ individuals to live, work and feel comfortable coming out, noting “they need to know they’re in a city that cares about them.”

“Everybody deserves someone to stand up for them,” she said.

While U.P. Rainbow Pride, which was founded in 2013, may be known best for the Pride Fest it holds each September, Wolfe emphasized that the group does much more beyond Pride Fest in the community, offering resources, support, education, events and connections in the area for LGBTQIA+ individuals and allies.

To spread awareness and develop further connections in the community, the nonprofit will host a U.P. Pride town hall meeting from 6:30 to 8 p.m. June 20 in the Shiras Room at Peter White Public Library in Marquette, Wolfe said.

David Shew, co-chairman of U.P. Rainbow Pride, will give an introduction, followed by a talk titled “What it’s like to grow up LGBTQ in the U.P.” by Cole Lindberg, then a discussion on historic development, goals and objectives by Lee Maki. The event focuses on core topics such as visibility, safety, acceptance, university involvement, transgender issues, member growth, sustainability and looking to the future, organizers said.

For those looking to get involved, Wolfe said the group is seeking volunteers who are interested “in genuinely helping the pride community” and “being part of us long term.”

The sixth annual Pride Fest will be held Sept. 14 at Tourist Park in Marquette; visit https://www.uprainbowpride.org/pridefest-2019 for more information.

Information on a wide variety of local, regional and national resources can be found at https://www.uprainbowpride.org/findsupport.