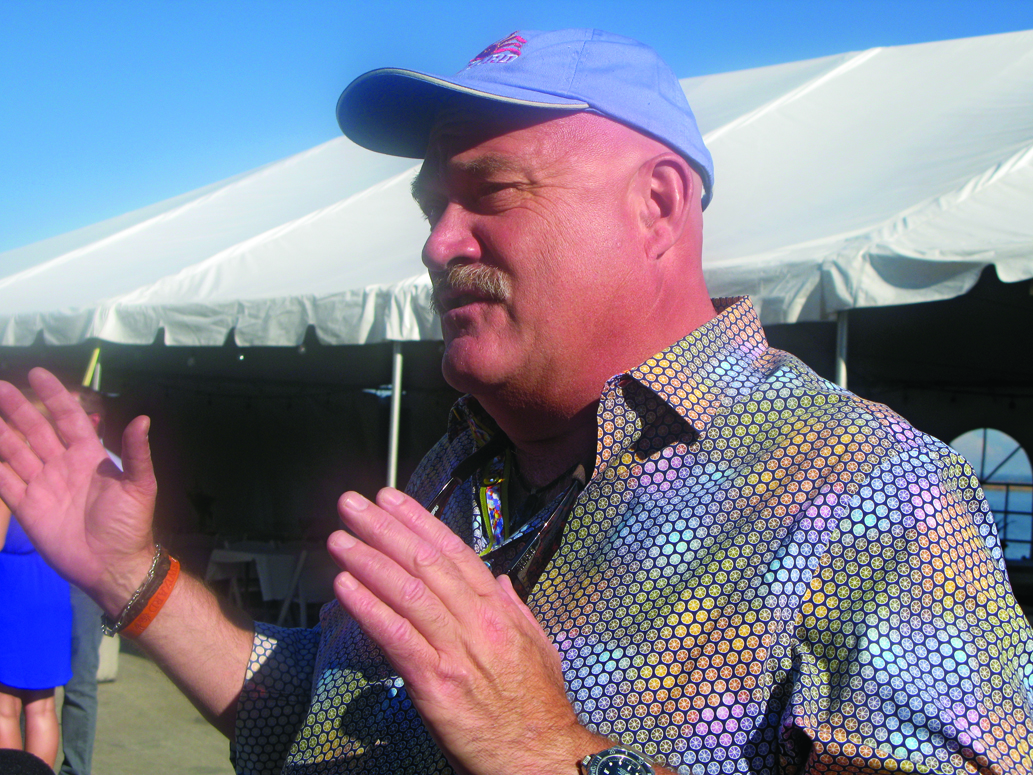 Capt. Keith Colburn of the television show “The Deadliest Catch” meets the public a Friday night fundraising dinner at the Lake Superior Yacht Yard. Proceeds from a Friday fishing trip to Stannard Rock and a golf scramble scheduled for today at the Marquette Golf Club’s Greywalls course are to benefit the Beacon House. (Journal photo by Christie Bleck)

MARQUETTE — A Friday fishing adventure led off the weekend’s activities to raise funds for the new Steve Mariucci Family Beacon House, which will serve as a place for patients’ families to stay while their loved ones are receiving medical care.

Capt. Keith Colburn from the popular reality show, “The Deadliest Catch,” and former NFL placekicker Jay Feely accompanied several fishing boats to Stannard Rock for a fishing expedition, which was followed by a fish-and-chips dinner party at the Lake Superior Yacht Yard.

The party included an appearance by Mariucci, former coach of the San Francisco 49ers and Detroit Lions, who has been active in the Beacon House mission.

“We’re very excited to break ground after we raise that last $900,000,” said Mary Dowling, chief executive officer of the Hospitality House of the Upper Peninsula.

The purpose of Friday’s event, she noted, was to create awareness for a different audience: anglers who hadn’t been part of past golf outings.

“It’s a really neat chance for us to get some more pledges,” Dowling said.

The new Beacon House, replacing the former facility along Third Street, will be located adjacent to the new UP Health System-Marquette.

“A lot of nonprofit organizations really believe in sustainability, and ours is one of those,” Dowling said. “So, what we want to do is build a debt-free Beacon House and then have a really good solid budget that’s, again, sustainable so that we’re not having to do a fundraiser every other day just to keep our operations afloat.”

A giant king crab, flown in by Colburn to Elizabeth’s Chop House where it was prepared, was to be auctioned off at the party and serve as an oversized appetizer for the winner’s dinner.

Colburn talked about Friday’s fishing trip in a good-natured manner.

“Fishing was great for everybody but me,” he said.

Catching a lunker, however, wasn’t the main purpose of the trip.

A Beacon House guest room is to be named for the “Deadliest Catch” in Colburn’s honor, with the room decor reflecting the crab fisherman’s theme and photographs.

“He’s the one that called Mary (Dowling) and said, ‘How can I help you raise some money?'” Mariucci said.

The former coach noted Colburn enjoys raising money for the Beacon House cause.

“He’s got such a big heart,” Mariucci said. “He loves coming up here to Marquette, and so we just love doing this for the Beacon House. It’s what’s on our mind and in our hearts to get this thing built.”

“I think the Beacon House does so much for the community,” Feely said. “I’ve had family who’s gone and stayed at the Beacon House, so I know first-hand how they fill in the gap at the times that are most needed — when you have a family member, someone who’s going through a health struggle, and you don’t know what you’re going to do.

“You have the stability of the Beacon House.”

An 18-hole golf scramble was scheduled for today at the Greywalls course at the Marquette Golf Club.