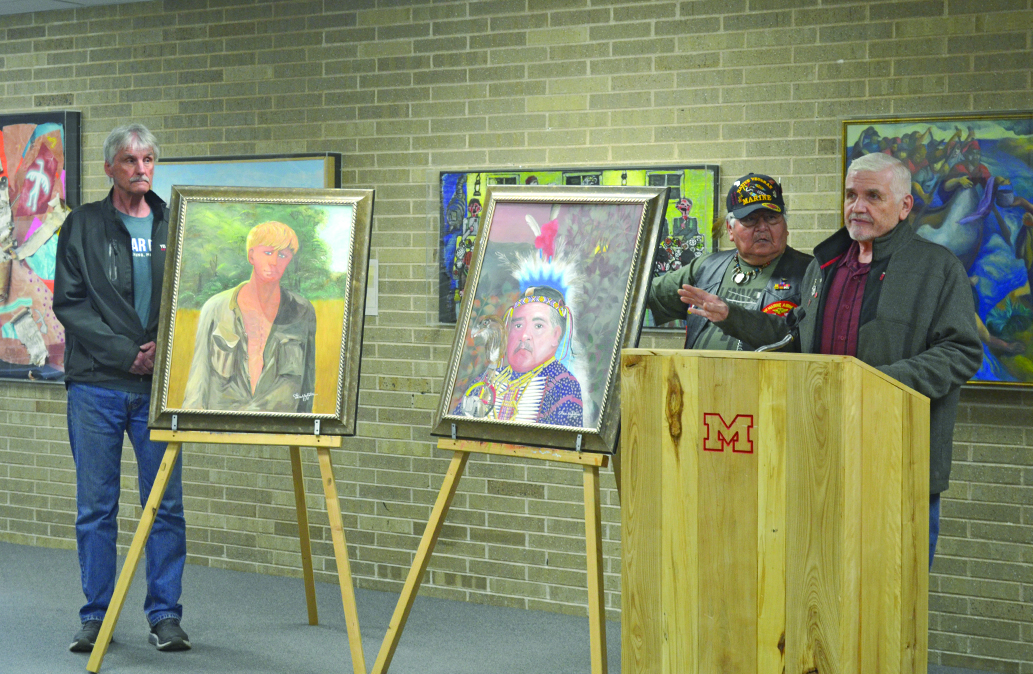 From left, Rod Linn and Glenn Bressette, both Vietnam veterans, stand next to paintings that fellow Vietnam veteran Steve Wahlstrom painted of them while Wahlstrom speaks at the podium. (Journal photo by Cecilia Brown)

MARQUETTE — A picture can be worth a thousand words.

Marquette Senior High School students will have a chance to experience the way art can communicate enduring stories, emotions and moments in history this coming school year, as the Vietnam Veterans Portrait Gallery by local artist and Vietnam veteran Steve Wahlstrom was recently donated to the school’s Fredeen Art Gallery.

An official donation ceremony of the portraits took place Wednesday at MSHS. Joining school officials for the event were Robert Mercure, who helped facilitate the donation, along with Wahlstrom, Rod Linn and Glenn Bressette — two of the veterans depicted in the portraits.

The paintings, which “reflect the emotions that are involved in war,” were donated so they could be displayed for “future generations to observe and hopefully learn from,” Mercure said.

The portraits, which Wahlstrom painted after his return from the Vietnam War to honor those he served with, offer the viewer a window into the hearts and minds of the many local veterans that Wahlstrom knew.

“I served in Vietnam and the Marine Corps along with all of these guys and so many others. And being aware of what we went through and the circumstances under which we came back, I felt this need in me to somehow pay homage to these guys, to give them some respect,” Wahlstrom said. “And all I could think of for me to do was to paint them and represent them to the people in the area who will never get to know them.”

Wahlstrom’s personal connection to the war and the veterans depicted in the paintings helped him to capture the nuances of their personalities and experiences in the portraits.

Each of the portraits is accompanied by a biography of the veteran written by Wahlstrom, offering viewers a further connection to the local veterans.

Wahlstrom hopes the portraits and biographies will allow viewers and future generations to “see deep into them and get an understanding of who these people really are,” he said.

“They’re such loyal patriots and have given so much; this is my way to honor them,” Wahlstrom said.

The 20-plus paintings, which will be displayed over the summer and officially dedicated on Veterans Day, also offer a learning opportunity for students, school officials said.

“Many of our (Vietnam veterans’) families are still in the area and we certainly want to honor and celebrate those families,” Marquette Area Public Schools Superintendent Bill Saunders said. “And we think that there isn’t a better place to do that than by exposing them in our art gallery here.”

The display will offer a local connection to history for students, some of whom may even know some of the veterans depicted.

“Any time we have an opportunity to make connections between education and what people call ‘the real world’ is significant,” MSHS Principal Jon Young said. “It’s significant for students to be able to recognize their place in the world, to be able to see the connection to other, greater surroundings.”

The donation was arranged by Mercure, a retired educator. He got the idea after seeing Linn and asking him what had happened to the paintings of Vietnam veterans that had been hung at the former Wahlstrom’s Restaurant in Harvey.

While Mercure didn’t know Wahlstrom personally at that time, he reached out to him to see what could be done to bring the portraits back into a public viewing arena, as they had been in storage.

“When I talked to Steve, he was excited to have the option of possibly putting these portraits back on display,” Mercure said.

With the blessing of Wahlstrom and school officials, Mercure arranged for the paintings to be donated to the school and displayed in the Fredeen Art Gallery. The school is grateful for the contribution, Saunders said, noting that he appreciated Mercure brining the idea to them and Wahlstrom’s generous donation.

“This is world-class art,” Saunders said. “And certainly we thank Steve for keeping these memories alive, for recognizing our local veterans and for having the incredible ability to paint these.”

Wahlstrom looks forward to the paintings being displayed, as they can honor veterans while educating the next generation about their experiences.

“For me personally, it’s so rewarding to see these guys get some level of recognition,” he said. “And maybe help define, in the minds of our young people, some of the issues of what war is about and the consequences of war.”