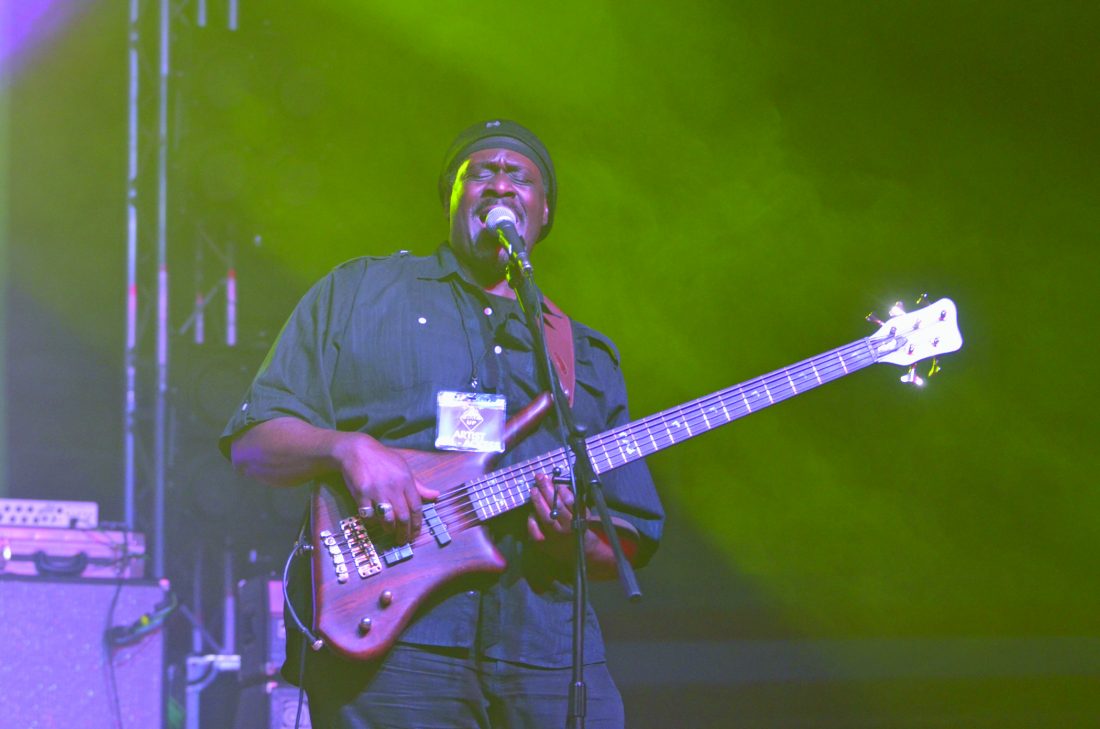 A member of the Scott Pellegrom Trio performs on the Miller-Coors Stage at Lakeview Arena for the Way Up Music Festival Friday evening. (Journal photo by Trinity Carey)

MARQUETTE — Even way up here in the Upper Peninsula, you can experience live music, food and vendors at the Way Up Music Festival hosted by Double Trouble Entertainment and the Radio Results Network.

The festival, which began Friday evening and continues today from noon to 2 a.m., takes place at the Lakeview Arena in Marquette.

Co-owner of Double Trouble Entertainment and DIGS Gastropub Bill Digneit said the community and local music scene had a desire for a large indoor music festival. Bill Digneit and his brother Pat Digneit worked with Travel Marquette to find a weekend that would be beneficial for tourism and the community.

For $30, festival attendees can see 30-plus bands on two stages.

“Everybody should really see the value in that,” Bill Digneit said. “Some people spend $200 on a single concert ticket. We’ve really got a good eclectic mix. It’s an open-format music festival, so there’s anything from reggae to classic rock, to jam bands to … a Spice Girls tribute to ’90s bands. We’ve got a little bit of something for everybody.”

Way Up features bands such as The Werks, Not Quite Canada with Kenny Olson from Kid Rock, Strung Together, Joel and the Good Boys, Afroman and more.

“There will always be a band playing at any moment between the two arenas,” Bill Digneit said. “The bands are staggered that way.”

Bar sales from Way Up Music Festival will support the Beacon House, Ahmed Shrine, Ainsley’s HALO and other nonprofit organizations in the community. A portion of festival proceeds will also be donated to various charities, Digneit added.

Digneit noted that the festival brings something fun to the area for Memorial Day weekend while supporting the local economy.

“I think it’s important because people want those big-city things in our small-town feel and we have a lot of artists, so it’s a great way to showcase local bands on big stages with large rigs and huge sounds systems, and it’s fun,” Bill Digneit said.

He’s hopeful the community will come and support the festival and that next year Way Up will be even bigger and better. Tickets are still available for Saturday’s performances.

To view the lineup or for more information like ticket prices, visit wayupmusicfestival.com.