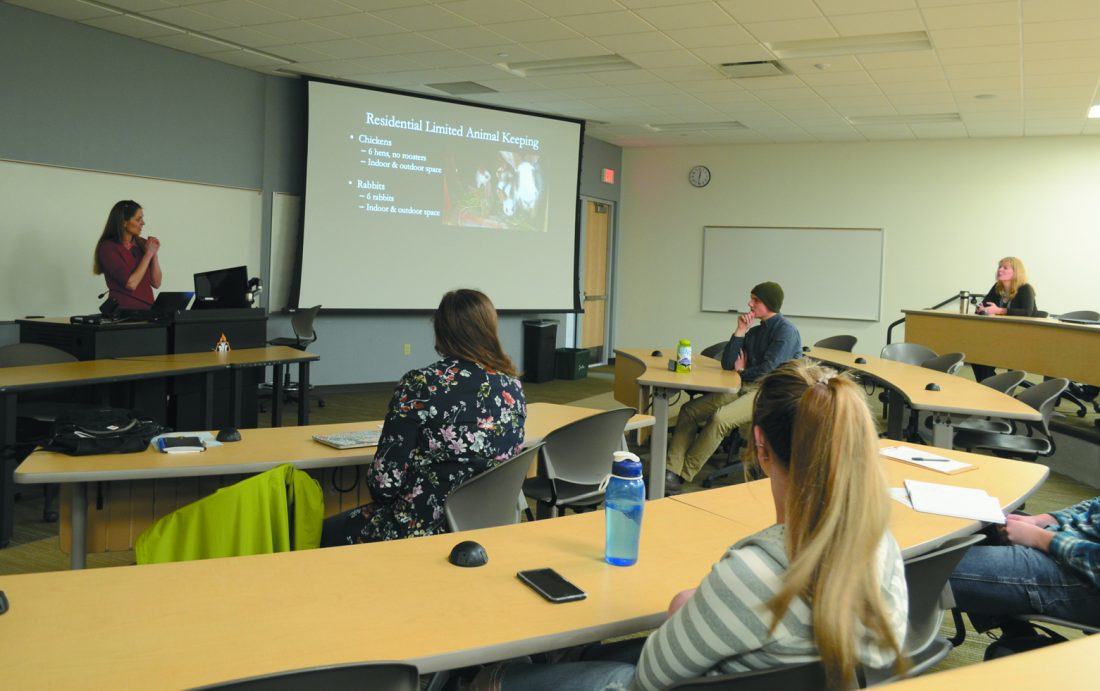 Sarah Mittlefehldt, who serves on the Marquette City Planning Commission and is an NMU associate professor in the Department of Earth, Environmental & Geographical Sciences, spoke about climate solutions and adaptations contained in the city’s new land development code, while Olivia Walcott, NMU EcoReps coordinator, spoke about recent efforts to promote climate resiliency and sustainability on campus.

Mittlefehldt, who joined the planning commission in 2018, worked with the commission to rewrite and update the entire land development code for the city, which governs land use. The code, which was approved by the city commission in February, contains “great climate adaptation and mitigation strategies” that aim to “help prepare us for the future,” she said.

These strategies touch upon everything from wind and solar power use, to carbon sequestering, to allowing chickens, rabbits and beekeeping in the city, to residential density, Mittlefehldt said.

Creating these strategies in the code is important, she said, as land use strategies have been identified as some of the top ways to help reduce carbon emissions and their impacts.

“If we don’t reduce our greenhouse gases 45 percent below 2010 levels by 2030, we’re going to have catastrophic changes,” Mittlefehldt said.

Locally, it’s particularly important, she said, as a recent regional climate report indicated climate change impacts would be more intense in the Great Lakes region than the national average. These changes include increased flooding, increased precipitation and wetter winters — but also drier summers, she said.

“We really need to be thinking about Great Lakes specific climate adaption and mitigation strategies,” she said.

Addressing density in the city is one climate adaptation strategy in the new code, she said, as the U.S. Department of Transportation found the average American spends 55 minutes in a car driving 29 miles per day.

“The idea is, if you have denser urban developments, people won’t have to be in their cars as much, people will live closer to the things that they need every day and that’s less carbon,” she said.

The new code addresses residential density in a number of ways, including less restrictive rules on setbacks, allowing small accessory dwelling units or “tiny houses” on lots for use by family members, and updating rules regarding intentional communities to now allow one person per 200 square feet of a residence.

Mittlefehldt also spoke about changes made in the code that “promote more renewable energy development in the city” and aim to “create consistent clear rules” to simplify and standardize the permitting process. These include extending the allowable height for roof-mounted solar panel systems, and allowing ground-mounted systems less than 10 kWh to be up to 10 feet tall and located in rear or side yards, she said.

There’s also a “brand new section of the code” that deals with food production in the city, Mittlefehldt said, which can help people produce food locally and sustainably.

“The goal of this is to promote local food production in the city, to make it easier for people to grow food,” she said. “This might seem very basic … but there were lots of rules before that sort of prevented people from being able to grow food in the city.”

These sections of the code make it legal to have up to six chickens, six rabbits and/or 10 beehives on a property, Middlefehldt said.

Other climate adaption strategies in the new code include the creation of riparian overlay district, carbon sequestration through protecting woodland integrity, and storm water mitigation in the city, she said.

Walcott told the audience about how EcoReps came to be and how the EcoReps’ “leadership and programing efforts translate into adaptation and mitigation for climate change.”

When Walcott started at NMU, EcoReps didn’t exist — but there were students all over campus doing different sustainability-related activities.

“Mostly there were single-shot sustainability efforts going on all over campus — which was great because they were grassroots and students were passionate about them — but most of the time, they ended when students left college,” Walcott said.

Walcott and other students realized that they needed to create a cohesive sustainability program for students that was structured to have longevity.

After conducting a sustainability inventory on campus and presenting the results to the NMU Board of Trustees in spring 2018, the board ended up allocating funds for the creation of the EcoReps program.

Since then, the program has offered numerous workshops, events and initiatives on campus that focus on climate mitigation and adaptation.

A few examples include the Turn Down the Lights initiative, a record-breaking clothing swap during NMU Sustainability week, a campus-wide litter pick up, fix-it Fridays for clothing and tune-up Tuesdays for bikes.

“We like the model of educating students so well that they’re so excited about that they go and tell their friends and thus have a ripple effect across campus,” she said.

“Really our motto is for students and by students,” she said.

For more details and information on the land development code, visit www.marquettemi.gov/departments/community-development/zoning/