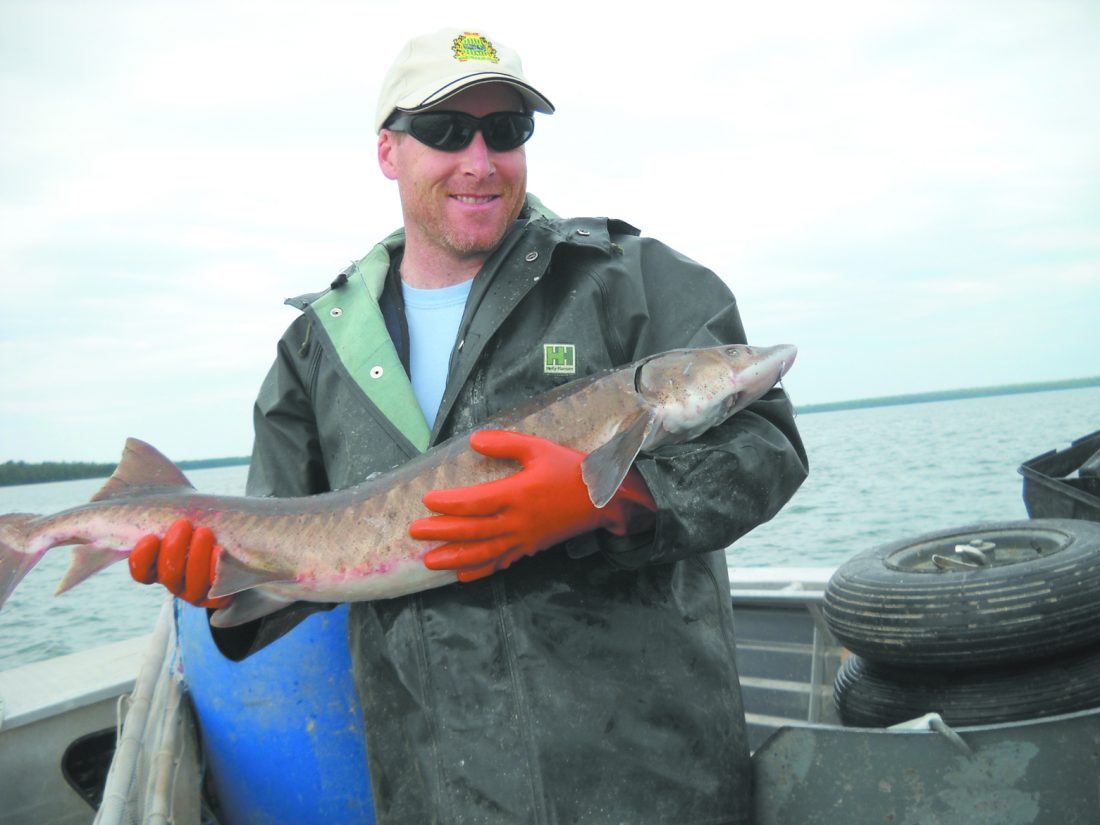 MARQUETTE — Have you ever wondered what lies at the deepest point of Lake Superior?

This was the topic of a talk entitled “Fishes in the abyss – the offshore ecosystem of Lake Superior,” presented by Shawn Sitar, a Lake Superior fisheries research biologist with the DNR, during Tuesday night’s Forests for Fish Forum: Lake Superior Food Web – Exploring the Inputs and Depths held at the River Rock Lanes and Banquet Center in Ishpeming.

Lake Superior, which is the deepest of all Great Lakes and also has the largest surface area, reaches depths of over 1,300 feet in some areas. Sitar, the project leader on the Lake Char research vessel, has been investigating “the abyss of Lake Superior” with his team to find out which fish live in this deep zone and how they survive in the extreme conditions.

The siscowet lake trout — which is only found in Lake Superior — is the “top dog” in terms of native predators in the deep zone, while the lamprey is, unfortunately, the top predator in the food web, Sitar said.

Within the deep zone, fish encounter high pressure, darkness and cold, he said.

“The abyss of Lake Superior is an extreme environment in terms of depth and pressure and temperature,” he said.

With the intense environmental conditions found at this depth, Sitar noted that there’s a “loss in productivity,” meaning that fewer plants and animals are found in the deep zone than in other, more hospitable areas.

Furthermore, the replacement time in Lake Superior — the time it takes a single drop of water to exit the system once entered — is around 191 years, which has important implications for human impacts on the lake, particularly the deep zone.

“It’s such an extreme environment, it takes so long to build up and recover, it’s really delicate,” Sitar said. “Although it can take a while for an impact to get out there, when it does get out there, it takes a long time for it to recover on its own. And humans are really good at disturbing nature.”

The nature of the deep zone also has wildlife management implications, he said.

“I think you can be misled that if there’s a lot of them out there, you can just fish them down or cut them down because they’ll come back,” Sitar said. “As you’ll recall, everything out here is slow growing. So imagine if you just had unharvested timber like sequoias and redwoods, and you went out there and just cut them all down, how long do you think it would take to replace that? So that’s a similar analogy to the standing stock of siscowets – their cycling is a lot longer.”

Lake trout were also discussed by Thomas Pratt, a research scientist with Fisheries and Oceans Canada, in a talk entitled “Everything is connected — life in the nearshore zone of Lake Superior.”

“Lake trout are so critical to our lake,” Pratt said. “Lake Superior is a lake trout lake; they are the keystone predator. They support both important commercial and recreational fisheries.”

Pratt told the audience about a hooking mortality study performed in the Great Lakes that provided insights on the importance of temperature thresholds for lake trout in the context of catch-and-release fishing.

The researchers found that when the water temperature is below 50 degrees Fahrenheit — as it commonly is in late fall or early spring — only 15 percent of lake trout that were caught and released perished.

However, it was a different story in the warmer months, when water temperatures were above 50 degrees Fahrenheit, he said.

“In the summer months when water temperatures get above 50 degrees (Fahrenheit) there’s a significant mortality imposed on those fish,” Pratt said. “So even though they’re treated the same as these fish when they’re caught and released, 43 percent of those fish died in the warmer months.”

This information has management implications, as the data showed “these temperature thresholds are very important for lake trout,” he said, noting “we’ve demonstrated that they’re really a cold water species.”

For cold water species such as lake trout, groundwater and riparian zones are of significant importance for population maintenance.

The importance of groundwater, riparian zones and the surprising linkages between the woods and the water were discussed during a talk entitled “Dynamic linkages between the forest and lake: the Lake Superior watershed” by Brandon Gerig, a professor of fisheries biology at Northern Michigan University.

Gerig spoke about how “stream flow, sediment and large wood interact to form the habitat template that stream insects and fish use,” as well as the “importance of connectivity to Great Lakes migrants including native suckers, sturgeon and Pacific salmon” during the presentation.

The overall importance of sustainable land and watershed management practices to cold water fisheries was also discussed at the opening of the forum by Pam Nankervis, a habitat biologist with the U.S. Forest Service, and Jim Cantrill of Trout Unlimited at the close of the forum.

“One of the things we know is that if you take care of the land surrounding your home waters, you’re taking care of the streams and the rivers; and that’s going to take care of the fishing. So it really does begin upstream. And we’re all downwind of somewhere,” Cantrill said. “But we all have a part to play where we’re going to be able to practice good land use management practices on our own parcels of land and those of our neighbors.”