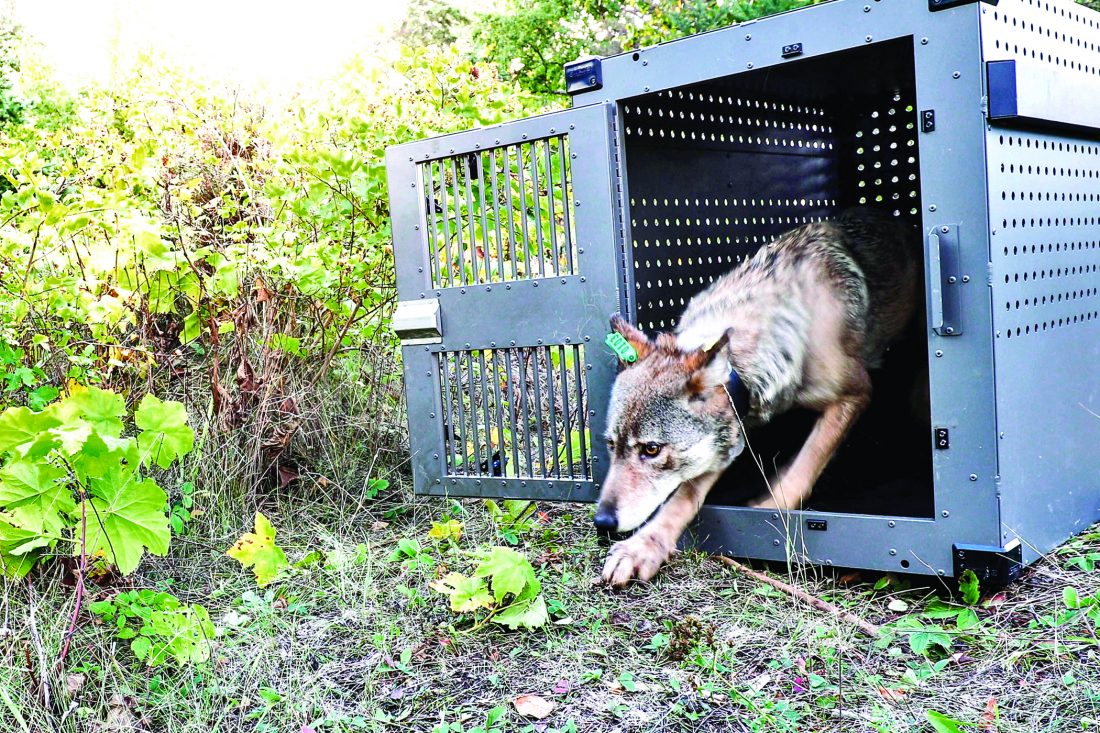 This Wednesday, Sept. 26, 2018, photo provided by the National Park Service shows a 4-year-old female gray wolf emerging from her cage at Isle Royale National Park in Michigan. The wolf along with a a 5-year-old male were flown to the park Wednesday from the Grand Portage Indian Reservation in Minnesota to kick off a multi-year effort to restore the predator species on the Lake Superior island chain. (National Park Service via AP)

LANSING — Relocating wolves to Isle Royale may only be a temporary solution to the island’s diminishing wolf population, according to a recent study.

The population has declined rapidly in recent years. In 2010, 19 wolves lived on the island. By 2016, that number had dropped to two.

The researchers used blood samples collected over the past 30 years to analyze the wolves’ DNA.

“We thought it was time for full genome analyses for as many of these wolves as possible to try and figure out some of the genetic details of the genetic collapse,” said Rolf Peterson, a research professor at Michigan Technological University and a member of the study’s research team.

The researchers found that genetic rescue — the introduction of new genes into a population to increase genetic diversity — can reduce problems associated with inbreeding. But those positive effects may only be temporary.

They also discovered that genetic rescue created problems that led to the rapid decline of the island’s wolf population.

In the late 1990s, a male wolf migrated from the mainland across an ice bridge to Isle Royale. He dominated the island’s native wolves and mated with a female from the island, according to the study.

Through the genetic work, the researchers found that the descendants of these wolves rapidly dominated the genetic ancestry of the population. The wolf from the mainland won out.

“At one point, almost 60 percent of the genes on the island were from him,” said Philip Hedrick, a population geneticist and conservation biologist at Arizona State University and a researcher on the study. “That’s astonishing. I’ve never heard of a situation quite like that.”

Eventually, the descendants began to breed with one another because no new wolves migrated to the island. That led to something called “inbreeding depression,” or the tendency for small, inbred populations to decline.

The introduction of a single wolf increased the population’s genetic diversity initially, but ultimately resulted in descendants that were extremely similar genetically and unable to produce viable offspring, which led to the population’s drastic reduction in size.

“I think this was kind of an extreme case where the positive effect was so strong that it ended up resulting in a negative effect,” Hedrick said.

The researchers think that the same thing may happen but at a slower rate with the current effort to restore wolves to control the exploding moose population.

“The island is almost totally isolated from the mainland,” said Jacqueline Robinson, an evolutionary geneticist at the University of California, San Francisco, and a researcher on the study. “It’s highly likely that over time, inbreeding will once again set in. It’s kind of inevitable.”

The National Park Service has begun relocating new wolves to Isle Royale to keep the island’s population from becoming extinct. They plan to relocate between 20 and 30 wolves to the island over the next few years.

Although 30 sounds like a lot, it would not be enough in the long run, Robinson said.

The wolves are from different source populations, which is a good thing, Peterson said.

“Instead of trying to copy nature and relocating a pair, this is a better founding population,” he said. “Then you start right away with a real mixed bag of genes.

“That’s better because you won’t see that inbreeding showing up quite as fast.”

If ice forms across Lake Superior and new wolves travel to the island, that will counteract the effects of inbreeding, Hedrick said.

However, without the formation of ice bridges and the movement of new wolves to the island, eventually all of the wolves would be inbred again.

With warmer, more windy winters as a result of climate change, ice bridges do not form as often as they used to, Peterson said.

Human intervention may once again be necessary to save the population.

“There may be a reason to periodically introduce wolves to the island to mimic what would have happened in the past,” Hedrick said.

A more regular introduction of new wolves to the island by humans would help prevent inbreeding, Robinson said.

Even if the effects are only temporary, Peterson said he believes it’s a good thing that humans have stepped in to save the population.

The wolves are the only natural predator for the island’s moose population, which has exploded in recent years due to the wolf population’s decline, Peterson said. Without wolves to hunt them, the moose will ravage the island’s forest and eventually begin to die of starvation.

“The National Park Service has taken it upon themselves to direct nature in what I consider to be a very positive direction,” he said, adding that it’s crucial to save the island’s ecosystem.

“The real value of Isle Royale, in my mind, is not that it’s some kind of untouched wilderness, because that’s a myth,” Peterson said. “The value today is that it’s a system with a top carnivore, a large herbivore and a forest, none of which is being exploited by people.”