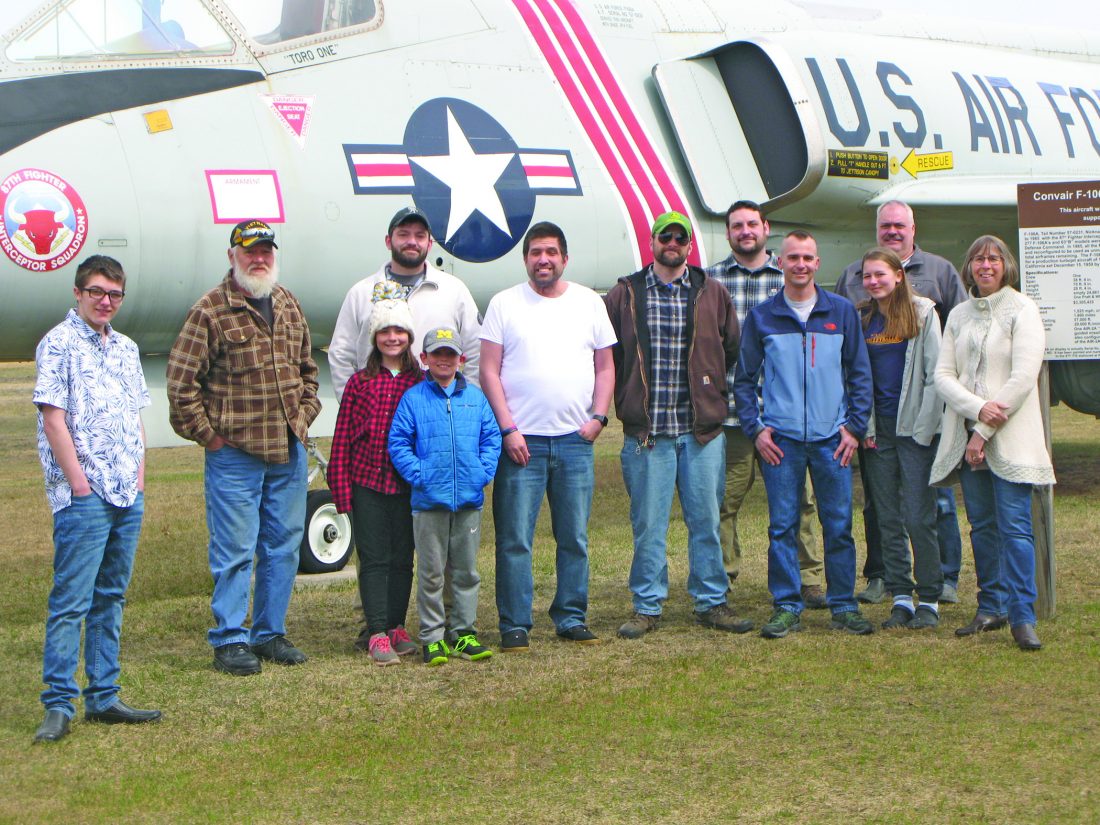 A group of veterans and their family members pose in front of an airplane during a tour of the K.I. Sawyer Heritage Air Museum in Gwinn on Saturday.Dozens of veterans and members of military families took part in a U.P. Veterans SERVED event at the museum. (Journal photo by Lisa Bowers)

GWINN — Camaraderie, is defined by Merriam-Webster’s Dictionary as a mutual trust and friendship among people who spend a lot of time together.

Dozens of Upper Peninsula veterans and their families participated in the daylong U.P. Vets Served event at the K.I. Sawyer Heritage Air Museum on Saturday. Many of those who attended used words like “connection,” “friendship” and, of course, “camaraderie.”

Michael Ryan, an Iraq War veteran, said the events are important because they offer a social outlet that veterans otherwise might not have access to.

“Networking and being able to talk about the resources, because that is what I have learned the most from other veterans. It’s not your service officer, it’s not going to the VA or the transition officer,” Ryan said. “It’s talking to other veterans to see what they did to get help.”

The program, which is provided through the SAIL Disability Network of the U.P., is offered to all veterans and their families, said Jason Wallner, veteran navigator with SAIL, or the Superior Alliance for Independent Living.

“We are trying to get more veterans involved,” Wallner said. “This doesn’t have to be for just disabled vets. We have veterans, too, that aren’t combat vets. That’s why we changed the name to Served, just having served, not necessarily in combat. They are still a veteran, they still served this country.”

As a health and wellness program, U.P. Vets Served, hosts events for veterans and military families all over the region, with the goal of providing a welcoming and engaging environment that fosters camaraderie.

Events like the one held Saturday or overnight camping excursions are free to veterans and their families, Wallner said, and will be held monthly across the U.P. starting this year. Activities are paid for, in part, by the SAIL’s One in Five Annual Appeal fundraiser.

“Bringing the generations together, veterans from different eras of history,” Wallner said. “They form a connection, even though their experiences may have been different.”

Ryan, who has been with the program since its inception, said he has made lifelong friends through his participation.

“I met Doug (Jones) through the program,” Ryan said. “Even though there is a big age difference, we help each other out, get each other out of the house. We’ve gotten a lot of things done together … We have had some good times together.”

A camping trip hosted by the AmVets Post 122 in Ishpeming was one of Ryan’s favorite trips so far.

“They gave us a cord of firewood and kept the fire going for, I don’t know, the 72 hours that we were there,” Ryan said. “We just kept it going through a rainstorm, we just put more wood on it and kept it going. It was a great time, real good camaraderie. And, nobody went hungry.”

Linda Dillman, whose husband Larry served at K.I. Sawyer Air Force Base for 14 years before retiring from the military, said she appreciated the opportunity the program afforded her family.

“Events like this raise awareness for the young people of what it was like,” Dillman said. “It’s important to get veterans together, to connect.”

Ryan said he has been to peer mentor classes and participated in veterans’ organizations in other parts of the country, and stressed that veterans can benefit from interactions with other vets.

“I have been in really dark spots too, and I know other people might not be able to get out of these areas,” Ryan said. “Programs like this can really help them get out. Even if it’s just to get out and be with other veterans that they can relate with, and hopefully drive that suicide number down that they say averages 22 every day.”

Wallner said the event was also a good way to bring attention to the museum, which has catalogued the timeline of the K.I. Sawyer Air Force Base as well as a significant amount of U.P. military history.

“They are in critical need of new volunteers to keep the museum open,” Wallner said. “I can’t stress enough that we cannot lose this part of our local and regional history.”

Veterans interested in participating in upcoming events can call 906-228-5744, visit the website at www.upsail.org/events/ or email upvetsserved@upsail.org.