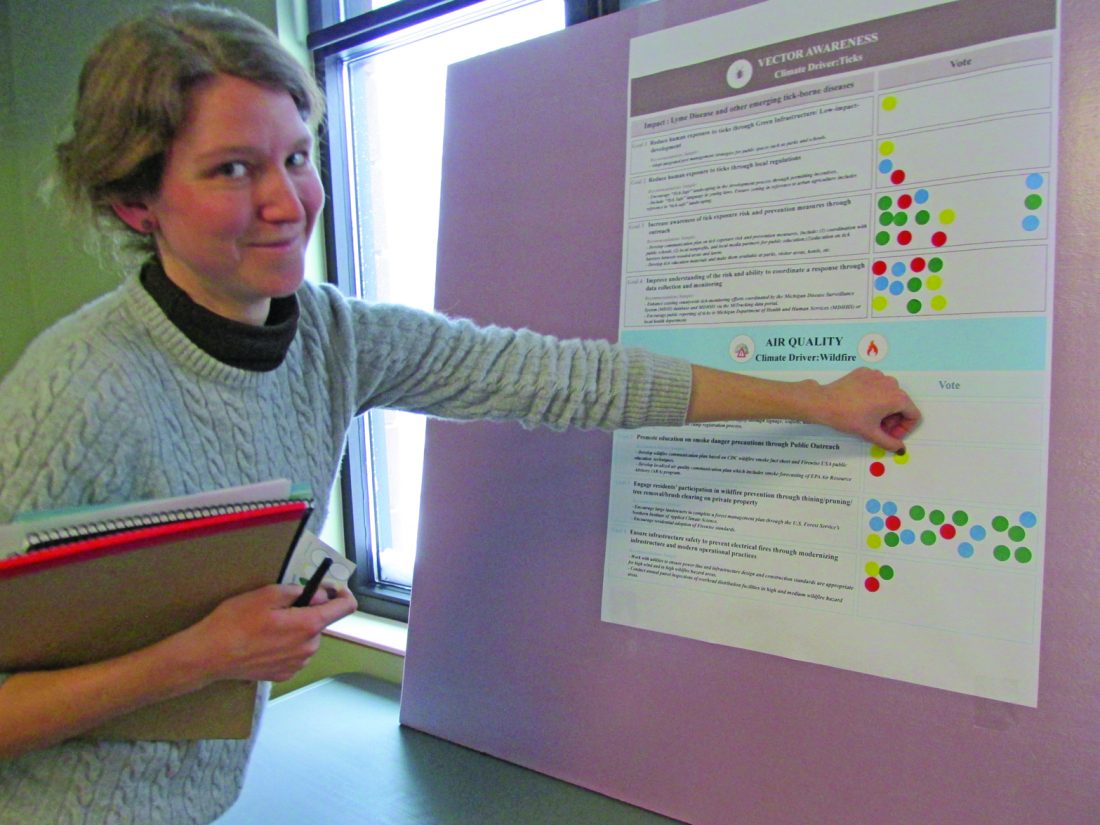 Emily Leach of the Superior Watershed Partnership smiles as she places a sticker on a poster, placing her vote for a recommended intervention from the Marquette County Climate and Health Adaptation Plan that she feels should be prioritized. After attendees had a chance to vote, the numbers were tallied and small groups discussed potential ways to implement the recommendations that were prioritized during the voting session. (Journal photos by Cecilia Brown)

MARQUETTE — Local leaders at a meeting Tuesday had a chance to gather and begin guiding the implementation of the Marquette County Climate and Health Adaptation Plan, as two volumes outlining the plan were officially released and distributed at the event.

“Today’s focus is on trying to have some rich discussions across a lot of diverse groups here about implementation for a more resilient future,” Brad Neumann, senior extension educator at Michigan State University Extension, said at the meeting Tuesday.

The project aims to mitigate climate change impacts on human health in the area through strategic infrastructure interventions throughout the county.

The plan, which is a three-phase project that began in spring 2017, has been coordinated by the Michigan State University Extension and School of Planning, Design and Construction, in conjunction with Michigan Department of Health and Human Services, the MDHHS’s Michigan Climate and Health Adaptation Program, Marquette County Health Department, Marquette County Climate Adaptation Task Force and the Superior Watershed Partnership.

With collaboration among many agencies and the local community, the project is “building capacity to address and interrupt climate change from impacting health,” said Wayne Beyea, extension specialist with MSU’s School of Planning, Design and Construction, noting that they aim to use the plan to look at “this built environment and how we can positively impact things moving forward.”

To develop the guidebooks, Beyea said input was gathered through meetings with local leaders, stakeholders and community members in 2017 and 2018.

Through these meetings, vector awareness, air quality, emergency response/extreme events and water-related issues were determined to be the top concerns in the area.

The four key priority areas and input from the meetings were used to develop the two guidebooks that were released, Beyea said, noting the volumes contain over 125 different strategies that organizers are now looking at ways to implement.

The guidebooks outline climate drivers, exposure pathways and given health outcomes for each of the four areas of concern.

For example, in the vector awareness domain, increased temperatures and changing seasonal patterns are the climate drivers, the exposure pathway is an increased tick population and Lyme disease is the potential health outcome.

During the meeting, attendees had a chance to view the posters and vote on recommendations for interventions they think should be prioritized for implementation.

After the voting, participants gathered in small groups — one for each major area of concern — to brainstorm tangible ways to realistically implement the highest priority strategies in the short and long terms.

“Prioritizing these potential solutions is really the key, and then detailing some of those recommendations moving forward, that’s really the bulk of what we want to be able to do this afternoon,” Beyea said.

For example, at the vector awareness discussion table, the group found that attendees voted to prioritize interventions to improve “understanding of the risk and ability to coordinate a response,” as well as increasing “awareness of tick exposure risk and prevention measures.”

The group talked about potential ways to implement these strategies, such as: informational signage and awareness campaigns; improving medical professionals’ awareness of Lyme disease and other tick-borne diseases; and working to collect more data on tick populations and Lyme disease prevalence.

Groups were also asked to discuss how they would implement these ideas, and what the needs for time, funding, talent and collaboration might be.

Organizers said the future of the plan will involve pilot projects and the release of volume III of the guidebook, which will outline the implementation process.

Officials said they hope to use funds from the Centers for Disease Control and Prevention to conduct pilot projects later this year or in 2020.

Furthermore, organizers highlighted the importance of Marquette’s plan to the nation as a whole, as Michigan is one of 16 states receiving CDC funding for this type of project.

“Everyone’s really looking at this project with a lot of interest,” said Aaron Ferguson, a program manager for the Michigan Climate and Health Adaptation Program at MDHHS. “Others will probably be looking to model this process and this is going to be a big influence on adaptation and climate health work in general, probably across the county.”

To learn more about the plan or view the guidebooks, visit superiorwatersheds.org/projects/marquette-area-climate-and-health-adaptation.