US marks 9/11 with somber tributes, new monument to victims

A U.S. flag is unfurled at sunrise today at the Pentagon on the 17th anniversary of the 9/11 attacks. (AP photo)

Bianca Burton, center left, and Erin Schultheis walk around the Pepperdine University’s annual display of flags honoring the victims of the 9/11 terrorist attacks on Monday in Malibu, Calif. Terrorists used hijacked planes to crash into the World Trade Centers, the Pentagon and a field in Pennsylvania on Sept. 11, 2001. Nearly 3,000 people were killed in the attacks. (AP photo) 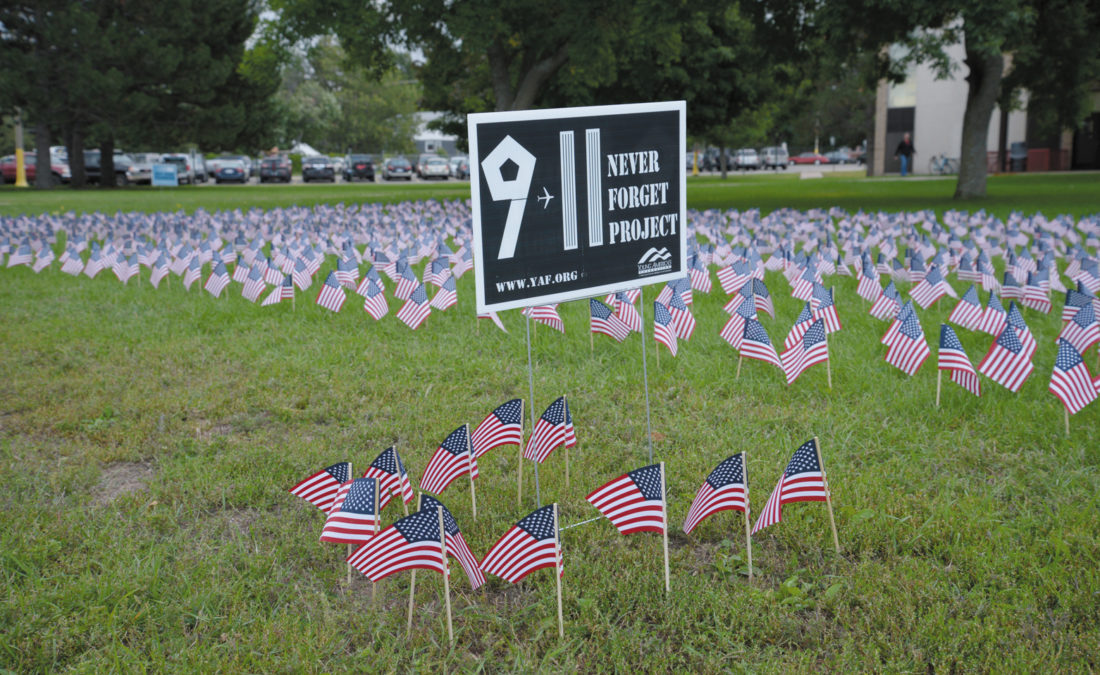 Dozens of flags and a sign in remembrance of 9/11 standing near the front entrance of Marquette Senior High School. (Journal photo by Corey Kelly)

NEW YORK — Americans are commemorating 9/11 with somber tributes, volunteer projects and a new monument to victims, after a year when two attacks demonstrated the enduring threat of terrorism in the nation’s biggest city.

Margie Miller was among the 9/11 victims’ relatives, survivors, rescuers and others who gathered on a misty Tuesday morning at the memorial plaza where the World Trade Center’s twin towers once stood. She came to the site from her home in suburban Baldwin, as she does 10 or so times a year, to remember her husband, Joel Miller. Only a few fragments of his remains were recovered.

President Donald Trump and Vice President Mike Pence headed to the two other places where hijacked planes crashed on Sept. 11, 2001, in the deadliest terror attack on American soil.

The president and first lady Melania Trump planned to join an observance at the Sept. 11 memorial in a field near Shanksville, Pennsylvania, where a new “Tower of Voices” was dedicated Saturday. Pence is attending a ceremony at the Pentagon. Trump, a Republican and native New Yorker, took the occasion of last year’s anniversary to issue a stern warning to extremists that “America cannot be intimidated.” 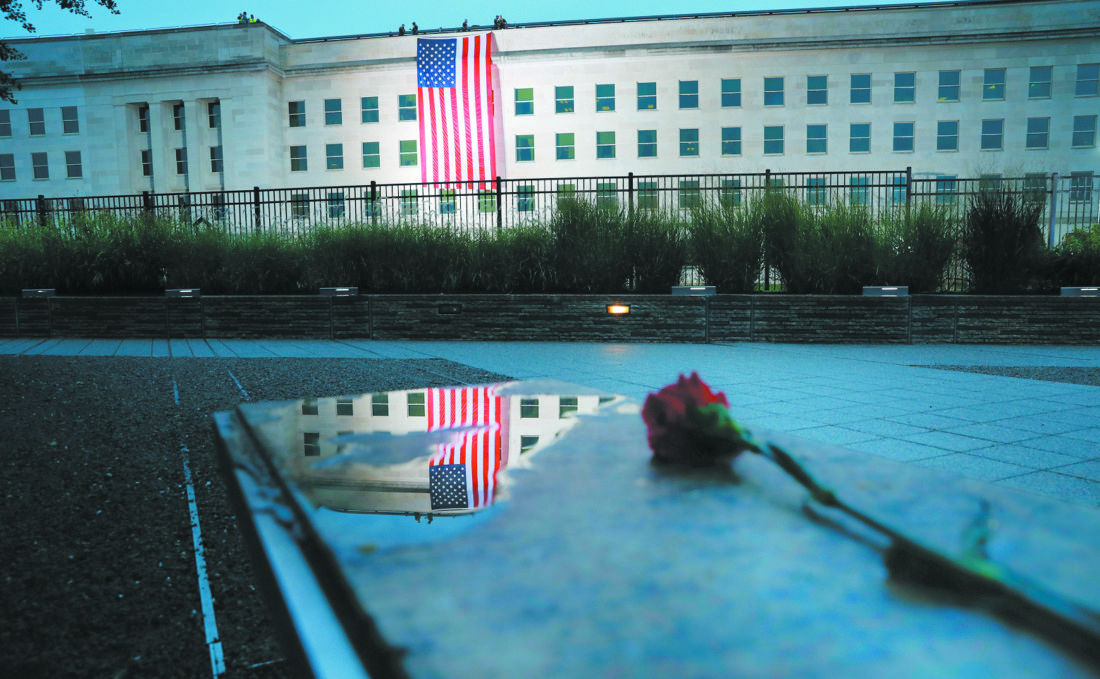 A U.S. flag is unfurled at sunrise today at the Pentagon on the 17th anniversary of the 9/11 attacks. (AP photo)

Nearly 3,000 people died in the attacks on 9/11, when international terrorism hit home in a way it previously hadn’t for many Americans. Sept. 11 still shapes American policy, politics and everyday experiences in places from airports to office buildings, even if it’s less of a constant presence in the public consciousness after 17 years.

A stark reminder came not long after last year’s anniversary: A truck mowed down people, killing eight, on a bike path within a few blocks of the World Trade Center on Halloween.

In December, a would-be suicide bomber set off a pipe bomb in a subway passageway near Times Square, authorities said. They said suspects in both attacks were inspired by the Islamic State extremist group.

The recent attacks in New York, as well as terror attacks elsewhere, were on Miller’s mind as she arrived Tuesday. 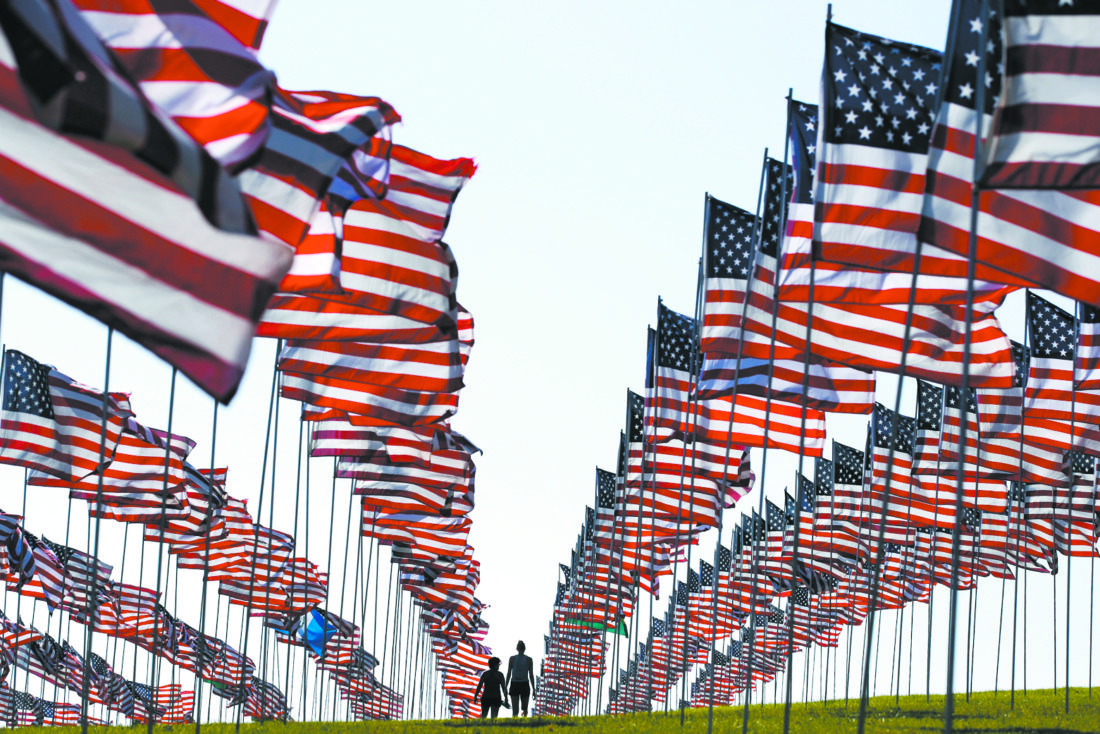 Bianca Burton, center left, and Erin Schultheis walk around the Pepperdine University's annual display of flags honoring the victims of the 9/11 terrorist attacks on Monday in Malibu, Calif. Terrorists used hijacked planes to crash into the World Trade Centers, the Pentagon and a field in Pennsylvania on Sept. 11, 2001. Nearly 3,000 people were killed in the attacks. (AP photo)

Debra Sinodinos, who lost her firefighter cousin Peter Carroll and works near the trade center, said she tries not to let the recent attacks unnerve her.

“You have to move on,” she said as she headed into the anniversary ceremony with her extended family. “Otherwise, you’d live in fear.”

The 9/11 commemorations are by now familiar rituals, centered on reading the names of the dead. But each year at ground zero, victims’ relatives infuse the ceremony with personal messages of remembrance, concern and inspiration.

Hours after the ceremony, two powerful light beams will soar into the night sky from lower Manhattan in the annual “Tribute in Light.”

This year’s anniversary comes as a heated midterm election cycle kicks into high gear. But there have long been some efforts to separate the solemn anniversary from politics.

The group 9/11 Day, which promotes volunteering on an anniversary that was declared a national day of service in 2009, routinely asks candidates not to campaign or run political ads for the day. Organizers of the ground zero ceremony allow politicians to attend, but they’ve been barred since 2011 from reading names or delivering remarks.

Memorials to 9/11 continue to grow at Shanksville, where the Tower of Voices will eventually include a wind chime for each of the 40 people killed there, and ground zero, where work is to begin soon on a pathway honoring rescue and recovery workers.

It will serve as a way to honor those who became sick or died from exposure to toxins released when the Trade Center’s twin towers collapsed. Researchers have documented elevated rates of respiratory ailments, post-traumatic stress disorder and other illnesses among people who spent time in the rubble.

About 38,500 people have applied to a compensation fund, and over $3.9 billion in claims have been approved.

Meanwhile, rebuilding continues. A subway station destroyed on 9/11 finally reopened Saturday. In June, doors opened at the 80-story 3 World Trade Center, one of several rebuilt office towers that have been constructed or planned at the site.