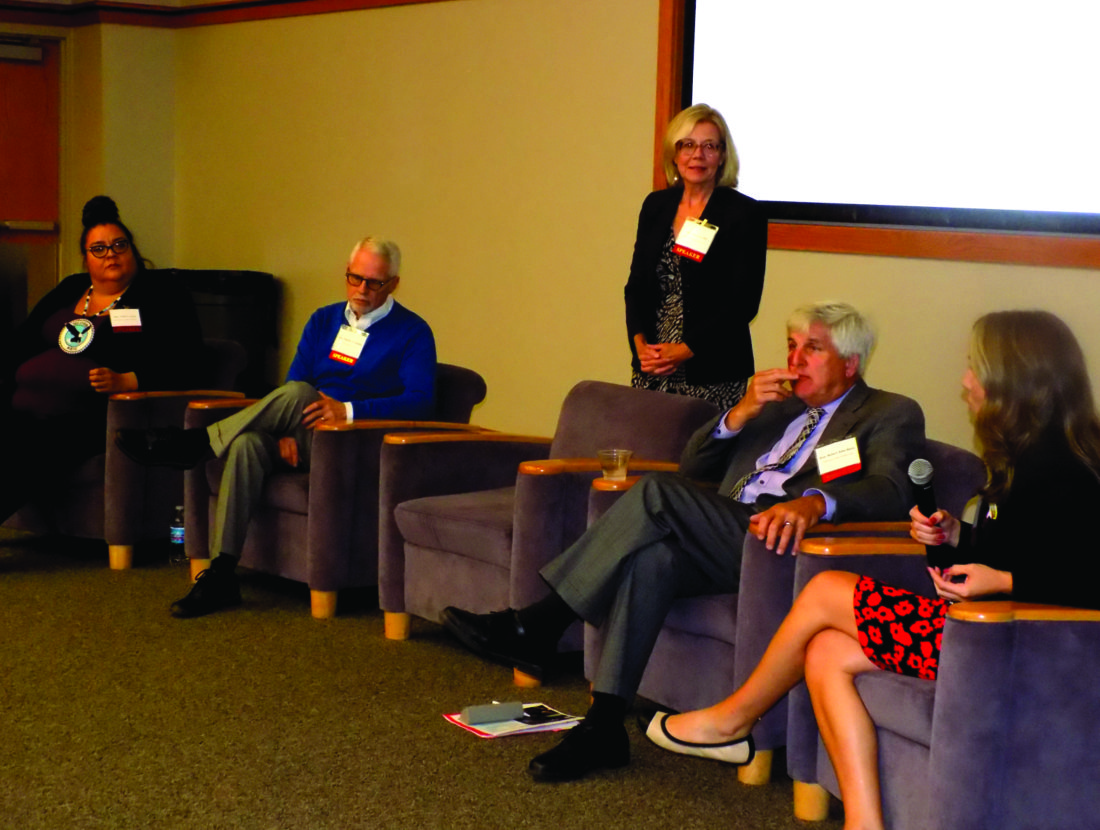 MARQUETTE — “Tribal Justice” — the film and the subject matter is depicts — is both uplifting and depressing.

The documentary by Anne Makepeace was shown to Northern Michigan University students Wednesday night in the Whitman Hall commons, followed by a panel discussion. The event was presented by NMU’s Center for Native American Studies and the Michigan State Supreme Court State Administration Office.

“Studies have shown that American Indian reservations are plagued by manufacturing, trafficking and use of crystal methamphetamine,” said April Lindala, the center’s director. “The reservations are targeted by non-Native drug cartels, and Native Americans have the highest meth usage of any ethnic group in the United States, resulting in extremely high crime and incarceration rates.

“Tribal nations have been searching to find ways for offenders to right wrongs and restore balance. Today more than 300 tribal courts now integrate culturally significant practices that focus on healing to wellness.”

The documentary explored the challenges faced by two judges who each oversee a tribal community: the Yurok Tribe of northwest California and the Quechan Tribe of southeast California. They work on alternative forms of justice that focus on rehabilitation, restoration and re-integration into their communities as opposed to punishment and incarceration.

Featured in the documentary were three struggling tribal members: Taos, Dru and Isaac.

Drug use and crime were part of the lifestyles of several of those members, with methods such as guardianship, a group home and deferred state court prosecution several of the means used to help them.

The results were mixed. Dru happily made it back to his family and was performing well in school while Taos appeared headed to a stable family of his own as well as further education.

Isaac, on the other hand, eventually was sentenced to two years in prison in Tucson, Arizona.

It wasn’t for the lack of trying on others’ part. His guardian worked extra hours to pay for his 18th birthday party, only to have Isaac be a no-show.

The dejected looks on the partygoers’ faces said it all.

Efforts to help American Indians continue in Michigan as well.

Serving on a panel discussion after the film were five judges: Cheryl Hill of the Marquette County Probate Court, Violet Ayres of the Keweenaw Bay Indian Community, Robert Butts of the Cheboygan County Probate Court, Jocelyn Fabry of the Sault Ste. Marie Tribe of Chippewa Indians, and Timothy Greeley of the U.S. District Court, Western District of Michigan.

“The whole idea behind our forum is to trying to state courts, tribal courts and the federal court to work together and talk together,” Hill said.

Fabry said drug, wellness and treatments courts are very intensive with a lot of oversight regarding participants, but also address the underlying issues through treatment.

Tribal court, she noted, has smaller numbers than state and federal courts.

The problems, though, can be similar.

“A lot of the people come before us, we know even if they’re there for a theft, we know it’s their drug addiction that is driving that criminal behavior,” Fabry said. “It’s one thing to address the crime and hold them accountable, which you need to do, but if you don’t address the underlying behavior, not only are they going to be back in front of a court, the community is at risk and our tribe is at risk.”

Ayres acknowledged there are successes, but added: “Not everybody is going to take the tools that they’re given and use them adequately to help themselves or the community.”

Butts said his court is trying to educate the state court judges to communicate and be involved with tribes.

He sees that happening in the state of Michigan.

“In Emmet County, they are using the tribal court court and vice versa,” Butt said. “The tribe is using some programs from the state court. Also, in the area of children being out of the home, there’s a lot of partnerships between tribes and the state courts, workers working together to put families back together.”

Greeley runs a drug court in the federal system.

He was blunt about what happened.

“It didn’t work well because when people get into federal court, they’re so far gone,” Greeley said.

However, the problem is not specific to one group.

“This is not a tribal problem,” Greeley said. “This is not a state problem. This isn’t a federal problem. It’s our problem, and we have to stop pointing fingers at each other.”

He stressed early intervention is crucial.

“If tribal court, if state court, can get these people when they’re younger, when the problem isn’t as developed as it is when it gets to federal court, we’ll see less people in federal court,” Greeley said.

Shifting the focus to demand instead of supply in the drug war is another step he strongly recommends.

The big question, he said, is: Why do people use drugs?

“I know with tribes,” Greeley said. “It’s because of despair, that the treatment that they’ve undergone has driven people to use drugs. We need to do something about that as well.”

The Center for Native American Studies, the Governor’s Task Force on Child Abuse and Neglect, and the Michigan Court Improvement Program sponsored the event.