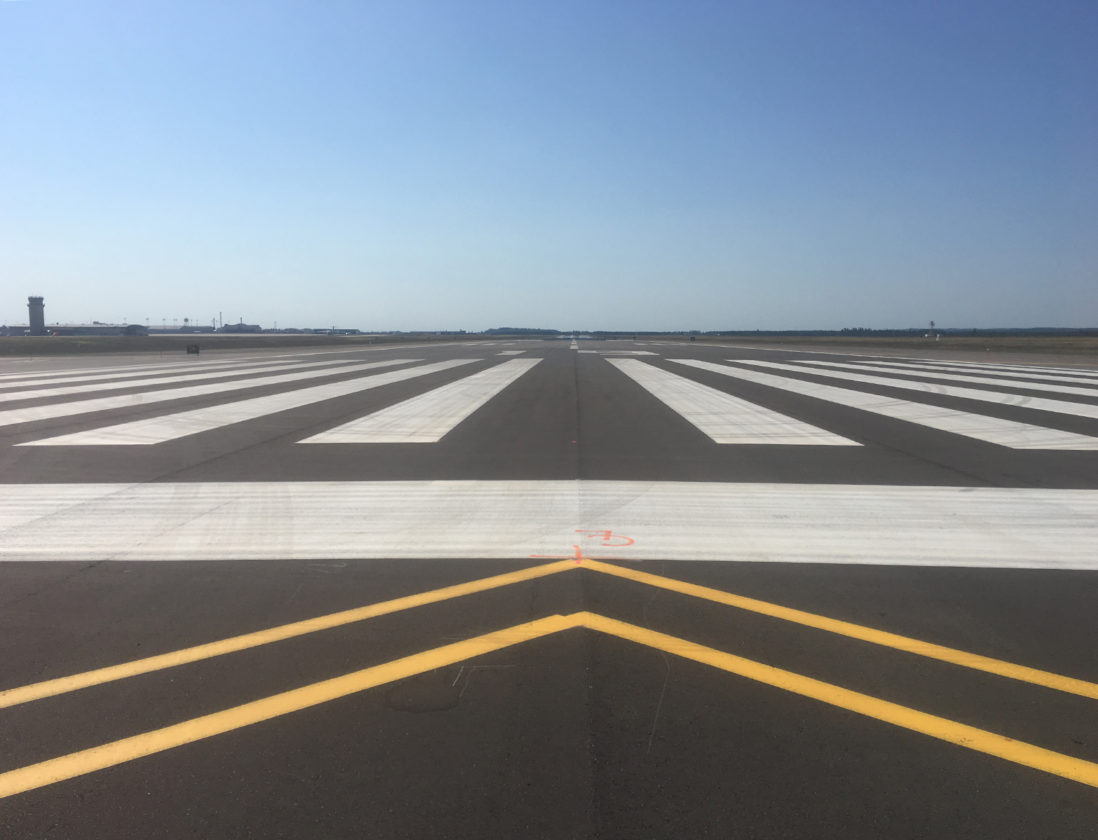 MARQUETTE — The runway rehabilitation project at Sawyer International Airport is now approaching completion, airport officials said Thursday, as the 150-foot-wide runway has been shortened from 12,070 feet to 9,070 feet and was fully rehabilitated over the summer.

“We’re happy. Everything went really well and on schedule,” said Sawyer Director of Operations Steve Schenden. “And we’re back up and running.”

Crews began work on the multi-phase project June 4, starting with rehabilitating the surface of the south 6,366 feet of the runway, while the north end of the landing strip remained open to prevent service interruptions, airport officials said.

Phase two, which involved closing and working on the north 6,370 feet of the runway while the south end was open, began in early July. In August, the airport closed for three days while crews worked around the clock to put the final layers of pavement on the runway.

“After that three-day shutdown and we opened back up, we were at the shorter runway (length),” Schenden said.

Airport officials worked with contractors, as well as the many parties that operate aircraft in and out of Sawyer, to carefully coordinate the project on a tight schedule and minimize air service interruptions, Schenden said.

“Payne and Dolan, (the) contractor on there, they met the time schedule and it was a pretty aggressive time schedule,” Schenden said. “We were pretty happy to maintain service except for those three days.”

Now, the project is in phase four, which consists of marking and grooving the fresh pavement on the runway — the grooving gives aircraft greater traction on the surface and while also aiding drainage on the runway during wet conditions, airport officials said.

Phase four is expected to wrap up in the next few weeks and will be the last phase of the project to be completed this year, Schenden said.

The fifth and final phase is planned for next year. In the spring, crews will go out and examine how the runway’s pavement has held up over the winter, sealing any cracks that may have formed.

“Because it’s an overlay, the concrete and the asphalt underneath may shift a little bit and it may show up on the surface, so we’re going to go in the spring and check all those spots and fix anywhere that we have a problem,” Schenden said.

With the major rehabilitation of the runway complete, Schenden said he believes they should be able to “get 15 to 20 years out of this without having to do major work.”

Airport officials appreciate the continued support of the county — which serves as the local airport sponsor — throughout the project, he said.

“The (Marquette County Board of) Commissioners were well aware of the situation and had a good understanding of it, so it definitely helped,” Schenden said.

The runway rehabilitation and shortening project — which was funded by a $5 million Federal Aviation Administration grant with a 90 percent federal share and 5 percent state and local shares — had been in the works and was under discussion with the county and the FAA for some time, Schenden said.

Airport officials said the rationale behind shortening the airport’s runway, which was initially constructed by the U.S. Air Force, is that the original 12,000-foot runway was very costly to maintain and longer than what’s needed for the airport’s operations.

“As much as we would have liked to keep 12,000 feet, it’s impractical and unnecessary,” DuRay said in a previous Mining Journal article about the project.

However, crews didn’t remove the 3,300 feet at the runway’s north end — this section of the runway remains intact but is now painted with stripes, which signify to flight crews that the section is no longer part of the runway.

“We’re not taking any of this pavement out,” DuRay was quoted as saying in a previous Mining Journal article. “We’re leaving the pavement here. This will all remain, so in the event that sometime down the road, (if) there was a need, we could reopen all of this back into usable pavement. Granted, there would be a little bit of maintenance required, but still, this pavement is not going away.”

Even with the runway shortened by approximately 3,000 feet, it still remains a longer-than-average runway for an airport of Sawyer’s size, airport officials said.

Furthermore, it won’t prevent the airport from accepting large aircraft, Schenden said, as Air Force One and the sizable Russian Antonov An-124, which landed at Sawyer in April, can still land on 9,000 feet.

“There’s really not much that can’t land here,” Schenden said.