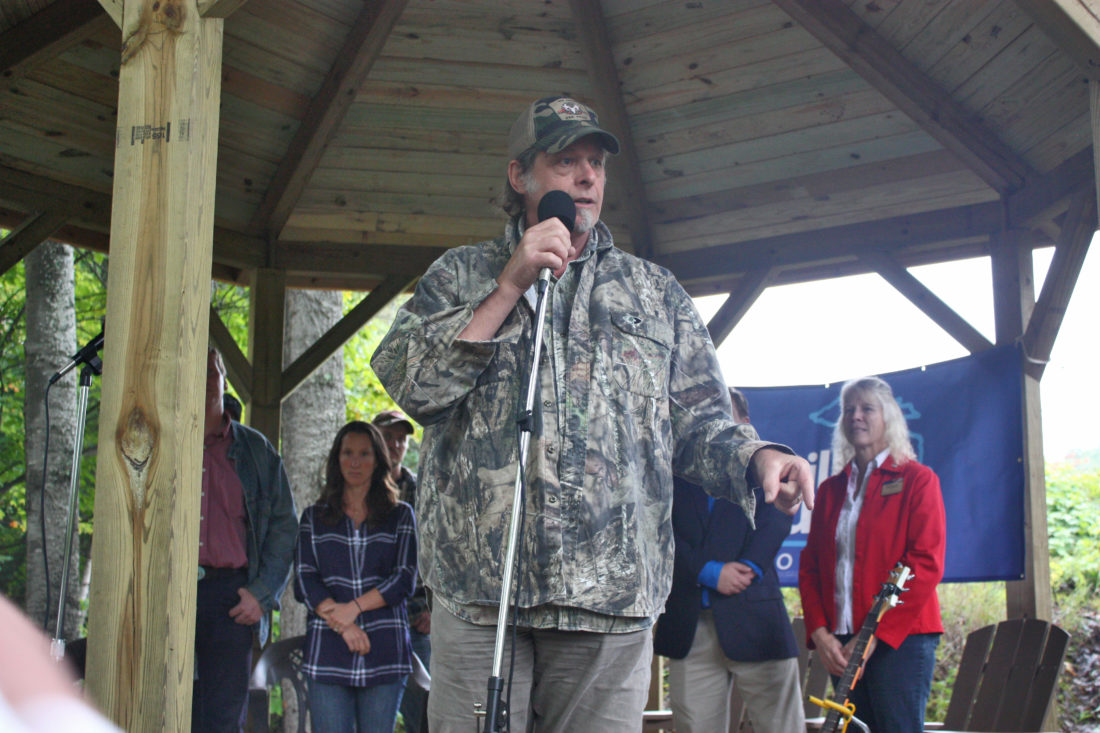 Musician and Michigan native Ted Nugent addresses a crowd of around 50 people at a Sportsmen and Sportswomen Coalition for Bill Schuette rally at the Rippling River Resort Thursday in Marquette. (Journal photo by Jaymie Depew)

MARQUETTE — Republicans in the Michigan Legislature and several who are currently running for office were joined by “Motor City Mad Man” Ted Nugent at a campaign rally held at Rippling River Resort in Marquette Thursday where the Second Amendment and statewide hunting regulations were discussed.

Nugent, who’s a musician and vocal conservative activist, officially endorsed gubernatorial candidate Bill Schuette last year and said he fully supports the “red wave” in Michigan politics and was embarrassed when the state was deemed “the reliably blue state” during the 2016 election. He said he’s satisfied with the Republicans running for office because they all believe in freedom and “won’t let the ‘Hillarisation’ of Michigan continue any longer.”

McBroom said it meant a lot to him that Nugent was supporting the campaigns.

Casperson, who served under the Granholm administration, agreed and said “once the Snyder administration came in, it was like we flipped a switch and the state starting coming back.”

“I’m here to tell you, the person they have running on the Democratic side of the ticket is Governor Granholm on steroids,” Casperson said. “She is very good politically … and she is to be taken very seriously, but we don’t want to go back.”

Posthumus Lyons said she was excited to be back in the Upper Peninsula.

“My first official stop as a statewide candidate last month was up here in the U.P.,” Posthumus Lyons said. “We are focused on maintaining and preserving and protecting Michigan’s way of life. Our opponents … they don’t understand our culture. They don’t understand our hunting heritage and the Second Amendment heritage. That’s what we’re looking to defend.”

As lieutenant governor, Posthumus Lyons she would help make sure “everybody’s got a job.”

“That starts with making sure our education is top-notch, high-quality … that our kids are able to read, so they can read to learn in our schools.”

Another thing, she continued, is lower auto insurance rates for Michigan residents.

“Under the Bill Schuette/Lisa Posthumus Lyons agenda is lowering our auto insurance rates,” she said. “We have paid way too much for way too long and it’s time to get something done for that.”

Nugent, with his guitar nearby, said he’s just a 70-year-old guitar player that loves venison and freedom.

“The outdoor lifestyle is the essence of being alive,” he said, adding that he believes in “Freedom, liberty, the pursuit of happiness, individual choices within the structure of laws that benefit the goodwill and decency of neighbors and families and your fellow humans and the good earth.

“It’s so simple that even the author of ‘Wango Tango’ figured this out, many years ago,” he said.

A second Republican rally with Nugent was also held Thursday in Traverse City. Schuette, who was unable to attend the Marquette rally, attended the event below the bridge.

Schuette is running for governor against Democratic candidate Gretchen Whitmer. The two will square off in several debates before the Nov. 6 election.