for the Escanaba Daily Press, Special to the Journal 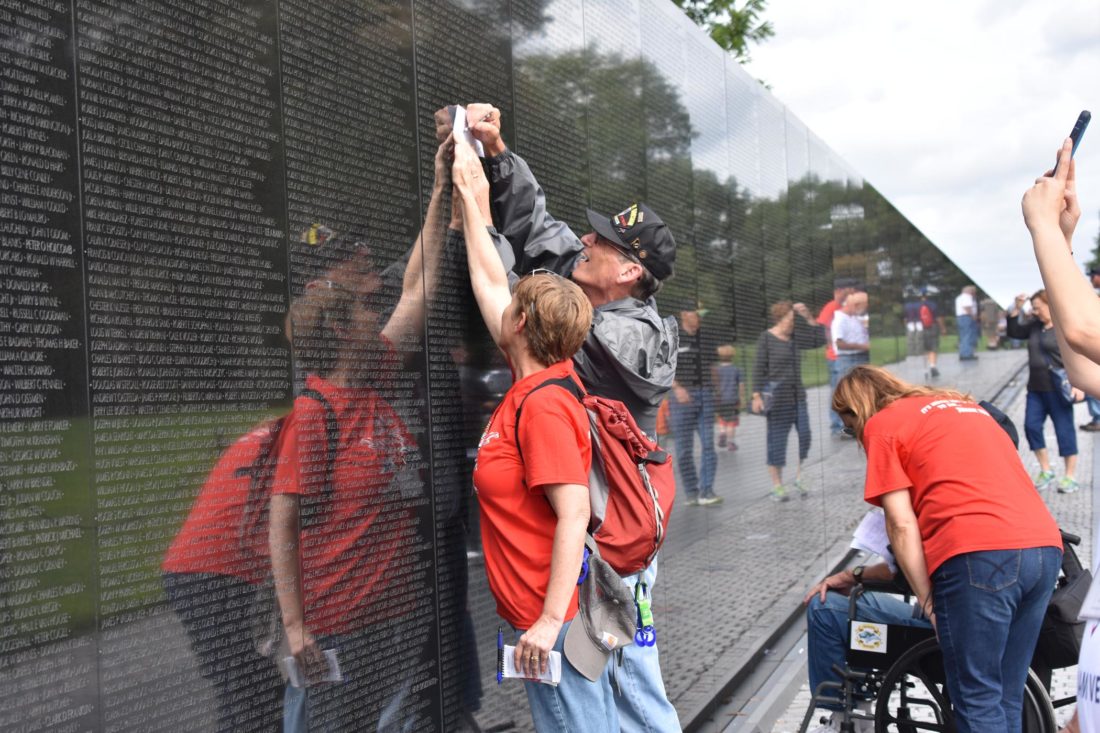 Vietnam veteran Richard Pichette, center right, takes a paper and pencil to get the name of his first cousin, Vincent Agius, off of the Vietnam Veteran’s Wall with the help of his guardian Tuesday during the Upper Peninsula Honor Flight in Washington. (Escanaba Daily Press photo by Haley Gustafson)

Eight-six veterans, including three World War II veterans, and guardians departed from the Delta County Airport in Escanaba at about 7:40 a.m. Tuesday and landed in the nation’s capital an hour and 45 minutes later.

The Honor Flight takes U.P. veterans on an all-expense paid trip to Washington to see the war memorials built in their honor. The flight includes Vietnam, Korean and World War II veterans.

Upon arrival, veterans were greeted by a line of airport patrons and other Honor Flight hub volunteers with rounds of applause and cheers saying “thank you for your service.”

President of the U.P. Honor Flight, Scott Knauf, said the flight went off without a hitch.

During the trip, veterans and their guardians toured the Lincoln Memorial, Vietnam Memorial Wall, Korean War Memorial, Arlington National Cemetery and more while traveling throughout the city with a police escort.

Vietnam veteran and Manistique resident Michael Tyran took the trip with his daughter-in-law, Nikki Tyran, Tuesday. While at the Air Force Memorial, Tyran said he was on the trip of a lifetime. Tyran served in Vietnam in the Army from 1968-69.

Nikki noted she was also enjoying her time with her father-in-law, adding it was a honor.

“It’s an honor and a privilege to come with him,” said Nikki. “I think every veteran should have the opportunity to do this.”

Her favorite moment from the trip was visiting the Tomb of the Unknown Solider at Arlington National Cemetery, while Michael’s was the Vietnam Wall.

John Martinson, of Amasa, a Vietnam veteran, said he decided to come aboard the Honor Flight from the encouragement of other veterans.

“It’s a once in a lifetime chance,” said Martinson, who was accompanied on the flight by his son, Todd Martinson, of Marquette.

Todd explained he was also a freelance guardian and was supposed to take another veteran on the flight with him and his father. Unfortunately, the veteran, Dwayne “Dewey” Maronen, passed away just before the flight. Todd and his dad carried a photo of Maronen and took him to all the memorials in his honor.

World War II vet, Donald DeKeyser, noted that his time on the Honor Flight was made possible by the persuasion of his seven children.

“All my kids thought I should,” said DeKeyser while sitting on a bench outside the Vietnam memorial. DeKeyser resides in Gladstone.

DeKeyser explained the highlight of his day was meeting and seeing new people.

This isn’t the 90-year-old veteran’s first time at the monuments, he added, noting he visited Washington and the memorials about 30 years ago with his children. Since he was last there, the Air Force Memorial, Vietnam and Korean monuments were added to the displays.

Hubbel resident Raymond DeRoche, a Marine Corp veteran, was a combat platoon sergeant and was wounded three times while serving his country. DeRoche served in Vietnam.

DeRoche noted many of his friends said he should go on the Honor Flight because of its “once in a lifetime” feel.

On the plane ride home, veterans were given a “mail call” with envelopes filled with letters from loved ones at home.

Upon arrival at the Delta County Airport, around 1,000 people were there with flags, banners, and cheers to greet the veterans home.

Veterans and those interested in becoming a guardian for the next flight can visit the Honor Flight’s website at www.upperpeninsulahonorflight.org.