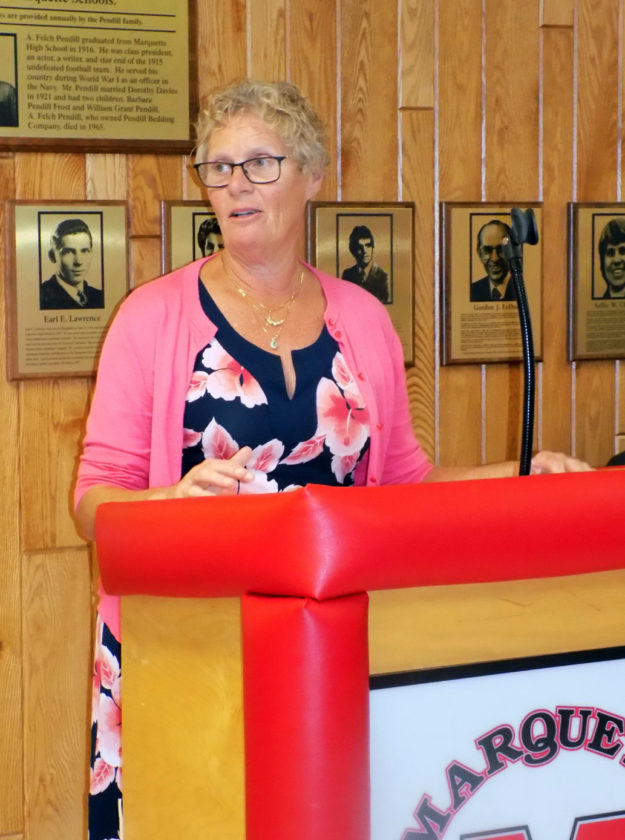 Michele Butler of Marquette is the latest inductee for the A. Felch Pendill Wall of Excellence. Honorees are distinguished alumni of Marquette Area Public Schools. (Journal photo by Christie Bleck)

MARQUETTE — Michele Butler, the 1998 Marquette Citizen of the Year, has joined the list of notable alumni of Marquette Area Public Schools who have been inducted into the A. Felch Pendill Wall of Excellence.

Butler was honored Tuesday at Marquette Senior High School, where the wall is located.

“This is really MAPS’ top gun,” MAPS Superintendent Bill Saunders said. “This is our Wall of Excellence here, our best of the best.”

The honor just doesn’t make note of a one-time achievement, he said.

“This is a lifetime of exceptional character, building stronger communities, charitable giving.”

“Every one of you in this room has some way touched my life and helped me be the person I am and do the things we’ve all been able to accomplish together,” Butler said. “No one does it alone.”

The wall is named after the late A. Felch Pendill, a 1916 graduate of Marquette High School who served as class president and was owner of the Pendill Bedding Company.

Butler serves as a Marquette ambassador, chief volunteer officer of the YMCA of Marquette County, a member of The Phyllis and Max Reynolds Foundation Board and vice president of the Marquette Golf Club Board, and is active in the Presbyterian and Greek Orthodox churches.

She previously served on the NMU Alumni Board, Gold Wildcat Club Board and the Rotary Board of Directors, and was the founding board chair of the YMCA of Marquette County.

Butler helped raise funds for the playground at Graveraet Elementary School, the donation and development of Clark Lambros’ Beach Park and many community fundraisers.

She received NMU Outstanding Young Alumni Award in 1985, the Rotary Service Above Self Distinguished Service Award in 2013 and the Evergreen Award for Outstanding Women Mentoring Program in 2013.

Butler is a partner at Vango’s Pizza and Cocktail Lounge in the city of Marquette.

“When you’re being selected, it isn’t just being the best in your field, because there’s a lot of outstanding people that excel to the top of their field,” Mercure said. “But what else do you do? What do you give back? And that’s critical, in my opinion.”

“As you look at the individuals that are represented on this wall, it doesn’t take long to recognize that each of them individually have had tremendous success, not only academically but what they’ve done since their time here at Marquette Senior High School,” Young said.

He also stressed that it’s important for students and staff to leave their mark on everything they do.

“Today’s recipient is an excellent example of leaving your mark,” Young said.