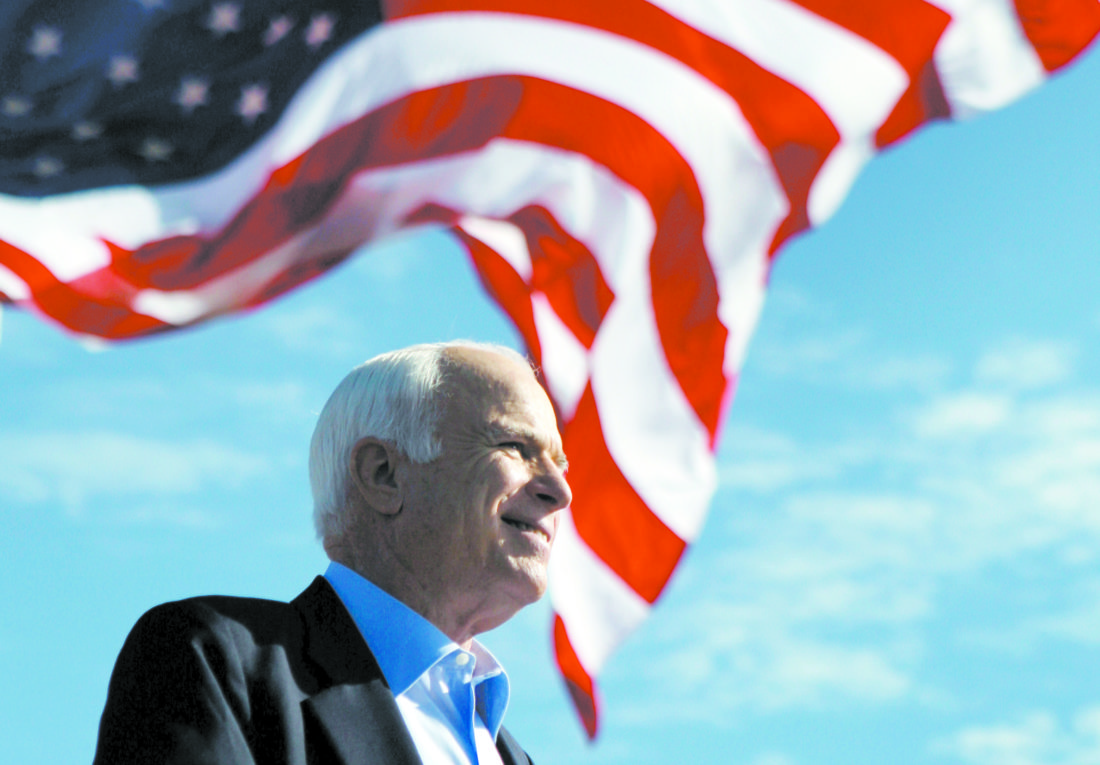 WASHINGTON — Sen. John McCain, who faced down his captors in a Vietnam prisoner of war camp with jut-jawed defiance and later turned his rebellious streak into a 35-year political career that took him to Congress and the Republican presidential nomination, died Saturday after battling brain cancer for more than a year. He was 81.

McCain, with his irascible grin and fighter-pilot moxie, was a fearless and outspoken voice on policy and politics to the end, unswerving in his defense of democratic values and unflinching in his criticism of his fellow Republican, President Donald Trump. He was elected to the Senate from Arizona six times but twice thwarted in seeking the presidency.

An upstart presidential bid in 2000 didn’t last long. Eight years later, he fought back from the brink of defeat to win the GOP nomination, only to be overpowered by Democrat Barack Obama. McCain chose a little-known Alaska governor as his running mate in that race, and turned Sarah Palin into a national political figure.

After losing to Obama in an electoral landslide, McCain returned to the Senate determined not to be defined by a failed presidential campaign in which his reputation as a maverick had faded. In the politics of the moment and in national political debate over the decades, McCain energetically advanced his ideas and punched back hard at critics — Trump not least among them.

The scion of a decorated military family, McCain embraced his role as chairman of the Armed Services Committee, pushing for aggressive U.S. military intervention overseas and eager to contribute to “defeating the forces of radical Islam that want to destroy America.”

Asked how he wanted to be remembered, McCain said simply: “That I made a major contribution to the defense of the nation.”

One dramatic vote he cast in the twilight of his career in 2017 will not soon be forgotten, either: As the decisive “no” on Senate GOP legislation to repeal the Affordable Care Act, McCain became the unlikely savior of Obama’s trademark legislative achievement.

Taking a long look back in his valedictory memoir, “The Restless Wave,” McCain wrote of the world he inhabited: “I hate to leave it. But I don’t have a complaint. Not one. It’s been quite a ride. I’ve known great passions, seen amazing wonders, fought in a war, and helped make a peace. … I made a small place for myself in the story of America and the history of my times.”

Throughout his long tenure in Congress, McCain played his role with trademark verve, at one hearing dismissing a protester by calling out, “Get out of here, you low-life scum.”

But it was just as notable when he held his sharp tongue, in service of a party or political gain.

Most remarkably, he stuck by Trump as the party’s 2016 presidential nominee even when Trump questioned his status as a war hero by saying: “I like people who weren’t captured.” McCain declared the comment offensive to veterans, but urged the men “put it behind us and move forward.”

His breaking point with Trump was the release a month before the election of a lewd audio in which Trump said he could kiss and grab women. McCain withdrew his support and said he’d write in “some good conservative Republican who’s qualified to be president.”

By the time McCain cast his vote against the GOP health bill, six months into Trump’s presidency, the two men were openly at odds. Trump railed against McCain publicly over the vote, and McCain remarked that he no longer listened to what Trump had to say because “there’s no point in it.”

By then, McCain had disclosed his brain cancer diagnosis and returned to Arizona to seek treatment. His vote to kill the GOP’s years-long Obamacare repeal drive — an issue McCain himself had campaigned on — came not long after the diagnosis, a surprising capstone to his legislative career.

In his final months, McCain did not go quietly, frequently jabbing at Trump and his policies from the remove of his Hidden Valley family retreat in Arizona. He opposed the president’s nominee for CIA director because of her past role in overseeing torture, scolded Trump for alienating U.S. allies at an international summit, labeled the administration’s zero-tolerance immigration policy “an affront to the decency of the American people” and denounced the Trump-Putin summit in Helsinki as a “tragic mistake” in which the president put on “one of the most disgraceful performances by an American president in memory.”

On Aug. 13, Trump signed into law a $716 billion defense policy bill named in honor of the senator. Trump signed the John S. McCain National Defense Authorization Act in a ceremony at a military base in New York — without one mention of McCain.

John Sidney McCain III was born in 1936 in the Panana Canal zone, where his father was stationed in the military.