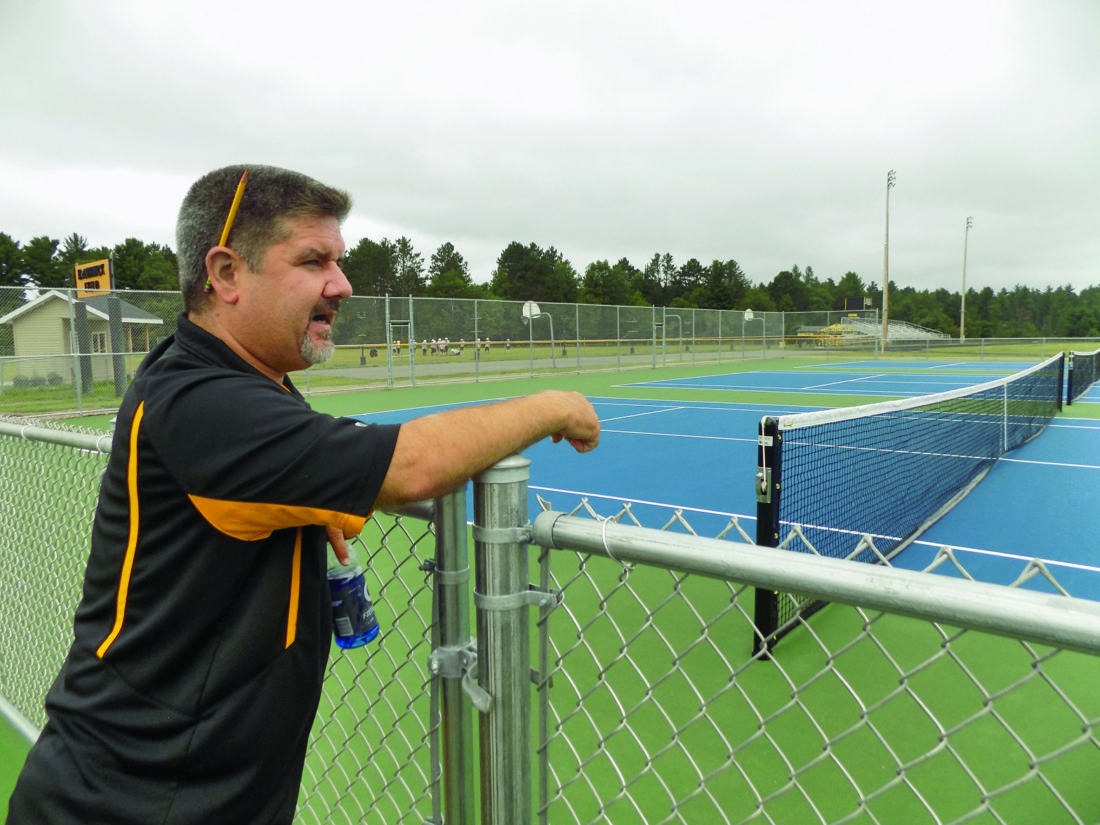 GWINN — The sports facilities outside Gwinn High/Middle School are a little more green and blue.

That’s because work has just been completed on reconstructing the tennis courts, with the actual playing area blue and the surrounding area green.

It wasn’t just about the colors, though. It was about creating an all-around better playing surface for the high school tennis teams.

“All the projects we’ve done have come from that,” Petrovich said of the bond funding. “We had new bleachers in the gym, for example.”

Interactive television panels in the classrooms also are a bond-funded project, she said.

Perhaps the most visible to the community, however, are the new courts, with the girls season just getting underway.

“They didn’t do them last summer because they were hoping to get a DNR grant,” Petrovich said of the new courts, for which Forsyth Township had applied for recreation money through the Michigan Department of Natural Resources to offset costs. “We had hoped that would come through. It didn’t.”

However, the project still went ahead this summer.

“They still needed to be done,” Petrovich said. “We had cracks in them, and the joke was you had to weed-whack before you could play tennis.”

A grand opening for the new courts is scheduled for 4:30 p.m. Thursday during the Meet the Modeltowners event.

Athletic Director Rob Soyring said GACS has tennis teams for girls in the fall and boys in the spring.

“I think it’s really uplifting,” Soyring said. “Obviously, if the community and ourselves and the kids had their way, they would have loved to have had them already last school year, but we were going through the process of seeing how we could come up with funding and things like that.

“Everyone’s just been ecstatic watching the progress through this summer, because they started basically that second full week in June, and everyone would keep in touch with each other — ‘OK, where are we at with it? Is it on the correct timeframe?'”

Soyring said that at the project’s onset, GACS staff had to partner with Sands Township so the township courts could be used while the final surface and lines were being put on the new Gwinn courts.

Fortunately, kids were able to get on the courts Aug. 13.

“That first day, everyone was all smiles,” Soyring said. “It’s been a long time coming.”

The project wasn’t just a minor rehab. In fact, “an extreme makeover” was how Soyring called the work.

“They took it all out,” Petrovich said.

The courts’ configuration too was changed since their direction was altered, she said.

There used to be five courts — four “playable” courts and one practice court — but the area was expanded and their direction changed so there now are six courts, with three on one side and three on another, she said.

“With an open area in the middle now, we have a place where we can put our bleachers for the spectators,” Petrovich said.

Soyring, who said the GACS sports boosters recently purchased a new set of bleachers for the courts, said: “We’ll be able to pull the fan base from what was the parking lot viewing area to now a safe center aisle.”

The new configuration also will allow for possible future expansion, he said.

“You gain the ability to start offering some of the tournaments within the conference setting,” Soyring said.

New fencing was installed around the courts as well as were new nets on the courts themselves.

The new courts also can provide a recreational benefit for the community since Petrovich pointed out the public can use them anytime.

Plus, they’re not just for tennis.

Because the courts are used for Michigan State High School Athletic Association play, though, pickleball lines were not painted on the new courts, she said. However, tape to allow for pickleball can be placed on the courts.

“So, we have the ability certainly to do that or have a pickleball tournament, and Rob is checking into the possible use for that,” Petrovich said.