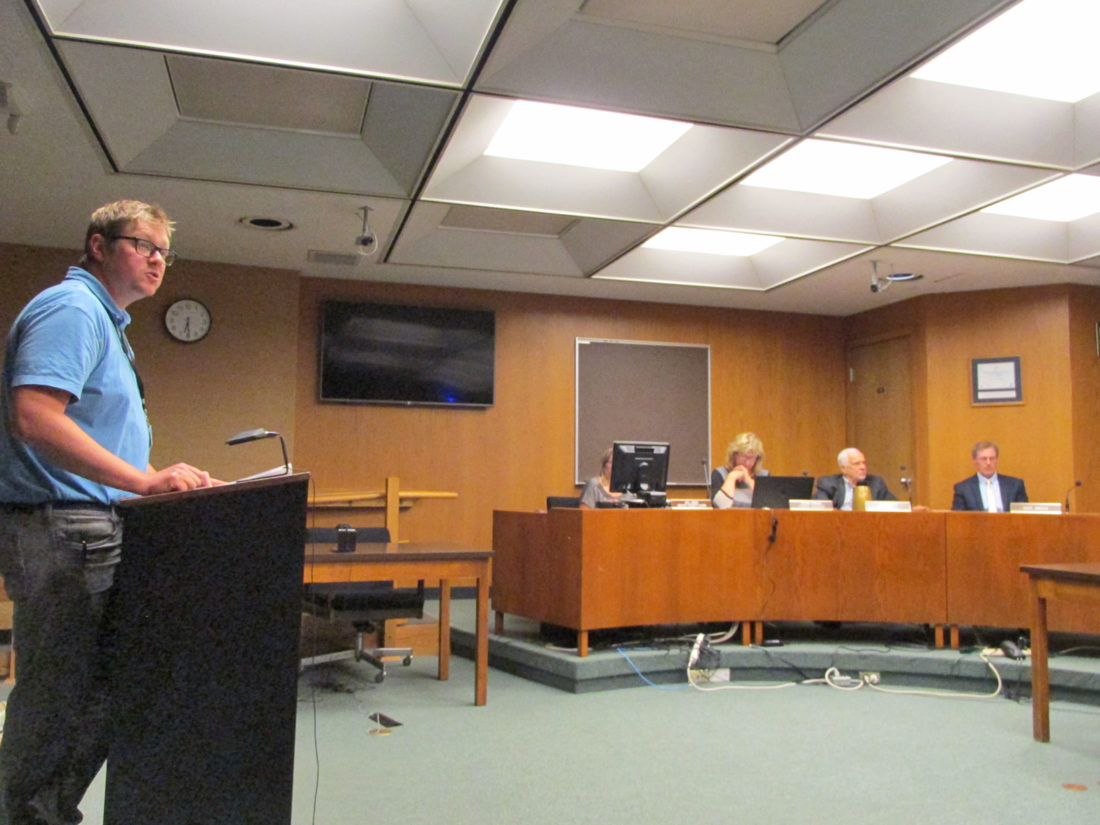 Marquette County Facilities Manager Aaron Karlstrom speaks about bids for a boiler system at the Negaunee Service Center at Tuesday night’s meeting of the Marquette County Board of Commissioners. The board voted, 5-1, to follow staff recommendation and award the bid to the low bidder, WDM Enterprises, at the meeting. (Journal photo by Cecilia Brown).

The commission voted 5-1, with Commissioner Bill Nordeen opposing, to follow staff recommendation and award the bid to low-bidder WDM Enterprises Inc. in the amount of about $77,700.

Three other bids were received for the project, which will be funded by the public improvement fund. The other bids were from Swick Plumbing and Heating at roughly $79,300; Dressler’s Mechanical Inc. at $79,700; and Berger and King Inc. at $85,500.

Nordeen expressed concerns about awarding the bid to WDM Enterprises Inc. as the company is based out of Marinette, Wisconsin, while two of the other bids received were from Marquette County businesses, Swick and Dressler’s.

“I always say that we have to give a little bit of weight to the local contractors that are taxpayers in Marquette County,” Nordeen said, noting that he felt the difference in bid amounts was small enough that a Marquette County bidder should have been chosen.

However, other commissioners said they felt the low bidder should be honored.

Commissioner Joe DeRocha echoed Corkin’s statement, noting: “If this board is going to start picking clean as to where the address of your business is, we should probably put it in the (request for proposal).”

Commissioner John DePetro also weighed in on the matter, saying that awarding bids based on locality could have a “trickle effect” and harm relationships with other communities.

The new boiler system to be installed by WDM Enterprises Inc. at the Negaunee Service Center will provide the building with heating redundancy, as the existing boilers are at the end of their life expectancy, according to board documents.

“There’s two boilers that are at the Negaunee Service Center, and it’s set up as an independent system,” Marquette County Facilities Manager Aaron Karlstrom said. “One is original to the administration part of that building. It goes back to 1968. Another one is used to heat the addition that was put on that administration side in 1979. Right now, the boilers don’t work together.”

This is problematic, he said, as there are currently no alternative options if one of the two boilers were to fail.

“If one of the boilers fails, we pretty much lose heating on that one section of the building,” he said. “This boiler replacement will tie the units together, allowing us to have redundancy, so if one fails, there’s another one there that’s ready to go for backup until that one can be maintained and fixed and properly restored.”

Karlstrom said that while he had not worked with WDM Enterprises before, he “looked at it as being an opportunity” to connect with a new contractor and noted that “everyone has really good things to say about” them.

“It allows me to know more people and work with more entities, so when I do have needs, I have various different phone calls and numbers I can call and get service,” Karlstrom said.

The control work for the project will be done by Johnson Controls, which has an established contract with the county, for about $8,500, making the total of the project slightly more than $86,200, according to board documents.