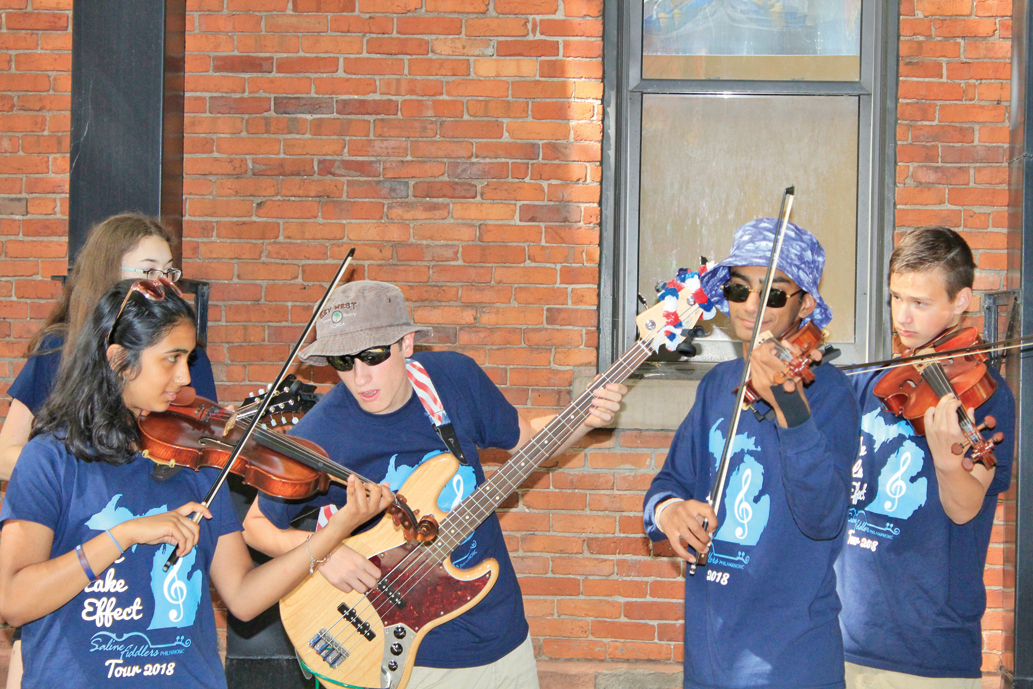 The Saline Fiddlers Philharmonic, a fiddling show band composed of high school students from downstate Saline perform an improv show at the Rosewood Walkway on Thursday evening as part of the Downtown Marquette Art Stroll. (Journal photo by Trinity Carey)

MARQUETTE — Butterflies weren’t the only thing filling the Rosewood Walkway in Marquette Thursday evening. Community members gathered to hear the eclectic sounds of the Saline Fiddlers Philharmonic, a youth fiddling show band, as they performed an offstage show as part of the Downtown Marquette Art Stroll.

The group — composed of high school students from downstate Saline — play a mix of Irish, bluegrass and other folk music and have just begun its seven-stop summer tour.

“Anything that we can play with a fiddle, we’ll take on and play,” said Saline Fiddlers Philharmonic Artistic Director Ashley Grebe.

The group, which is about to celebrate its 25th year as a nonprofit organization, was given the opportunity to play for a different kind of crowd at the art stroll.

“Ordinarily we play in large venues with large audiences and when they get to do something like this where they are face-to-face with the community and the people, they get to see what the music does and how people react to it,” Grebe said. “That’s their favorite thing to do.”

The Philharmonics also typically play from a scheduled set list, but the group was able to decide on the spot what music they would play and who would take on what solos, Grebe added.

The group hopes their old-style music will catch the ears of the younger generations and bring together the community members of all ages that they play for.

“Saline has such a culture of that and when we get to get out into different parts of the country and bring that there, it’s a great gift. The founder of the groups philosophy was to take that music that he felt passionately about, that his father played and his grandfather played, and bring it to this generation,” Grebe said. “It’s extremely important. Any person who has some sort of historical or cultural connection to any type of music, it’s their responsibility to keep it alive and keep it going,” she added.

The Hiawatha Music Co-op also attended the performance to sell tickets and gather volunteers for the 40th annual Hiawatha Traditional Music Festival, which aims to bring people together to enjoy a variety of music.

“We thought while we have the fiddlers here we’d bring out tickets and our volunteers to see if we can get some people to come down to the festival,” said Executive Director of the Hiawatha Music Co-op Susan Divine. “It brings a lot of really great live music and something that we want to share is traditional music, so we want people to be exposed to a variety of Cajun, bluegrass, blues, old-timey and enjoy a festival of family and all ages activities.”