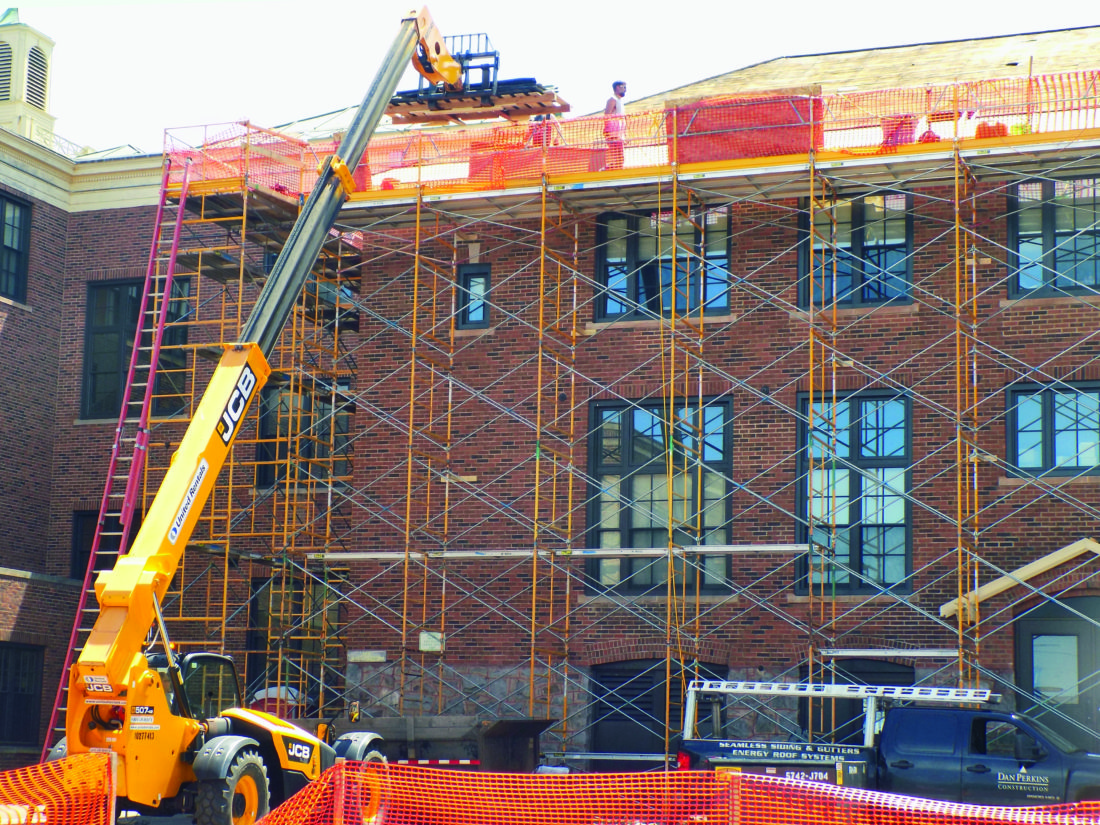 Dan Perkins Construction is replacing the roof on the industrial arts wing of the Ishpeming High/Middle School building. Work is expected to continue through August. (Journal photo by Christie Bleck)

ISHPEMING — The Ishpeming High/Middle School building should look different at the beginning of the 2018-19 school year, especially if you look up.

Anthony Bertucci, director of business services for Ishpeming Public Schools, said Dan Perkins Construction, based in Ishpeming, is putting a new roof on the industrial arts wing of the high school.

Bertucci said that in March and April 2017, two large windstorms began to lift the copper off the roof, which caused it to start to peel.

“We were able to get Perkins in and secure the roof membrane back to the roof structure,” Bertucci said.

Bertucci acknowledged the roof structure is complicated, and because of the time frame required to complete the engineering and solicit bids, the school district was unable to finish the roof replacement last summer.

Preliminary work, such as bidding, took place this past winter, with the job scheduled to begin with the end of the 2017-18 school year, he said.

Work already is underway for the project, which Bertucci anticipates to continue through August.

The Perkins bid was $249,000, said Bertucci, who noted that most of the replacement work is covered by insurance. Minor repairs related to the roof project are covered by the district’s sinking fund.

Bertucci said the roof again will be copper.

“I’m very, very proud to be part of that job,” said Dan Perkins, owner of the company in charge of the project.

Perkins said the restoration job on what he called a “handcrafted roof” will duplicate the historic batten-seam roofing, with copper crafted around the battens.

Perkins is involved with IPS in other ways, including serving on its 10-year strategic planning board.

“Ishpeming is just a shining star,” said Perkins, who noted IPS compares well with other areas schools regarding things like testing, cost of administrative overhead and how many students attend college.

Perkins said the school district has a “terribly low-income demographic” and many single-parent families.

“The kids are coming in very disadvantaged,” he said.

However, Perkins stressed the district has a high rate of students attending college, pointing out that the Ishpeming High School Alumni Association was generous with the recent graduating class by having awarded $330,000 in college scholarships to 54 students.

It might not hurt either that the middle/high school building has what Perkins called an “Ivy League” feel.

“I love the fact that kids get to go to a school with a copper roof,” Perkins said.

HOUGHTON — As federal teams began arriving in Houghton County to assess flood damages on Monday, U.S. Sen. Debbie Stabenow visited several sites to see the devastation and the work that has already been done to improve it.

Teams from the Federal Emergency Management Agency and the Michigan State Police Emergency Management and Homeland Security Office will go throughout the county to visit sites identified by local assessment teams, Houghton County said in a release Monday. The teams will then compare their figures to the ones compiled locally, which roughly put the damage at $50 million. That comparison will determine whether the area qualifies for federal disaster status — and the amount of federal aid that comes with it.

If granted, the funds would be used to repair federally funded state and local roads in Houghton, Menominee and Gogebic counties — declared a “state of disaster” by Gov. Rick Snyder last week. Numerous roads were heavily damaged by extreme runoff and flooding following intense rain on June 16-17.

MDOT said in its release, damage estimates to roads in these counties are anticipated to exceed $28.7 million. The FHA will determine eligibility for federal relief funds following a review of the estimates. MDOT is requesting the expedited release of any federal funds.

“They’ve come in record time, at our urging, to do an assessment,” Stabenow said of FEMA. “We’ve got to find out what their assessment is, and that’ll tell us what’s available through FEMA.”

Stabenow, who is also a ranking member of the U.S. Senate Committee on Agriculture, Nutrition and Forestry, said the U.S. Department of Agriculture’s Rural Development division will have an important role to play in bringing in grants and loans for roads, bridges, sewer systems and other damaged infrastructure.

The county Emergency Response Team is starting to move from disaster response and recovery to the reconstruction phase, it said in a release.

“I’m going to do everything humanly possible to get the resources that are needed … I know the snow’s coming and things need to move as quickly as possible,” Stabenow said.

One of those joining Stabenow on Monday’s tour was Jason Allen, director of USDA Rural Development for Michigan. The agency distributes more than $1 billion annually in grants and loans.

“It’s humbling to take a look at the amount of community involvement,” he said. “I also am just surprised and almost caught off-guard by the amount of damage that large quantities of water can do.”

At each stop, people pulled out their phones to show her photos of what the site had looked like a week earlier. Stabenow marveled at the differences.

“I think it’s really extraordinary, first the power of the water and the damage, and then a week later, to see how much of this has been at least mitigated so people can move out of their homes, they can drive,” she said. “There may have been a concrete road and now it’s gravel or dirt, but the way things have improved in just a week is amazing, and that’s people that are volunteering, the people that are stepping up.”