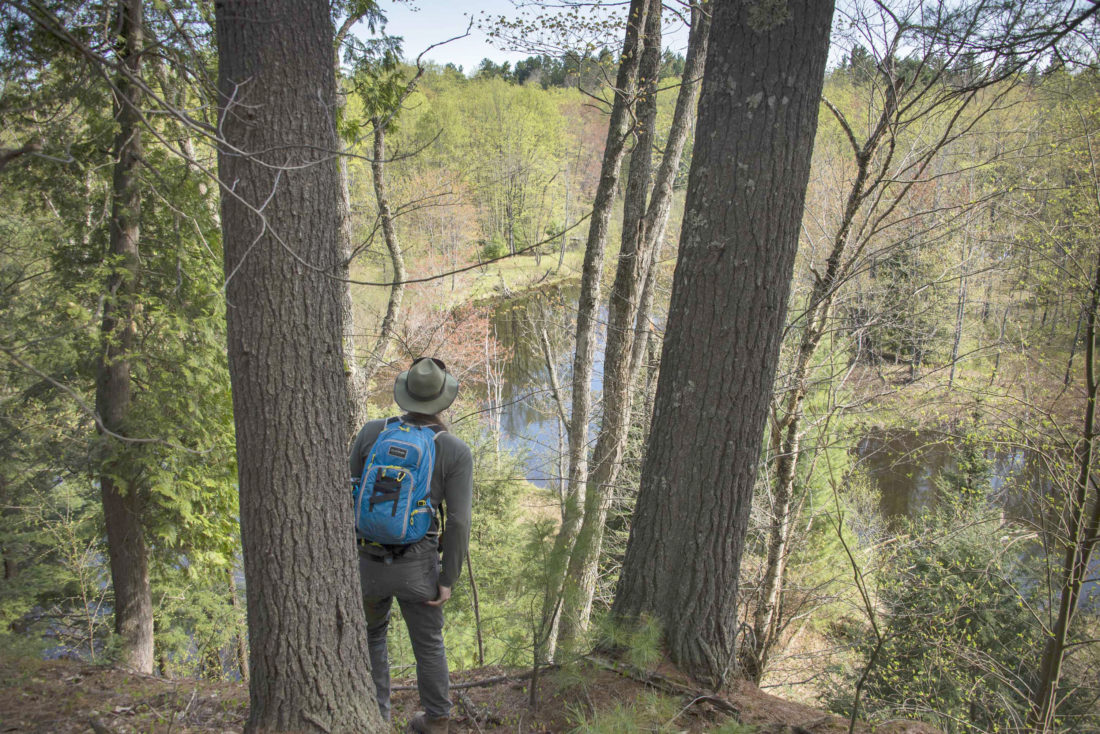 NEGAUNEE — The community forest concept already has become a reality in the region, with the Yellow Dog Watershed Preserve having taken ownership of over 688 acres of forest along the Yellow Dog River in 2016.

The Yellow Dog River Community Forest, named after that river, was the result.

Note that it’s called a community forest, not a nature preserve, reserve or park.

The Upper Peninsula Land Conservancy is spearheading efforts to create a new forest of this ilk, the Dead River Community Forest in Negaunee Township.

“This is kind of a new style of land conservation,” said Andrea Denham, UPLC assistant director. “The traditional idea of land conservation is to take a pristine wilderness and put a gate up and keep people out of it, but that’s not the point. You can’t separate people from the land. It’s part of our community, especially here in Marquette.” 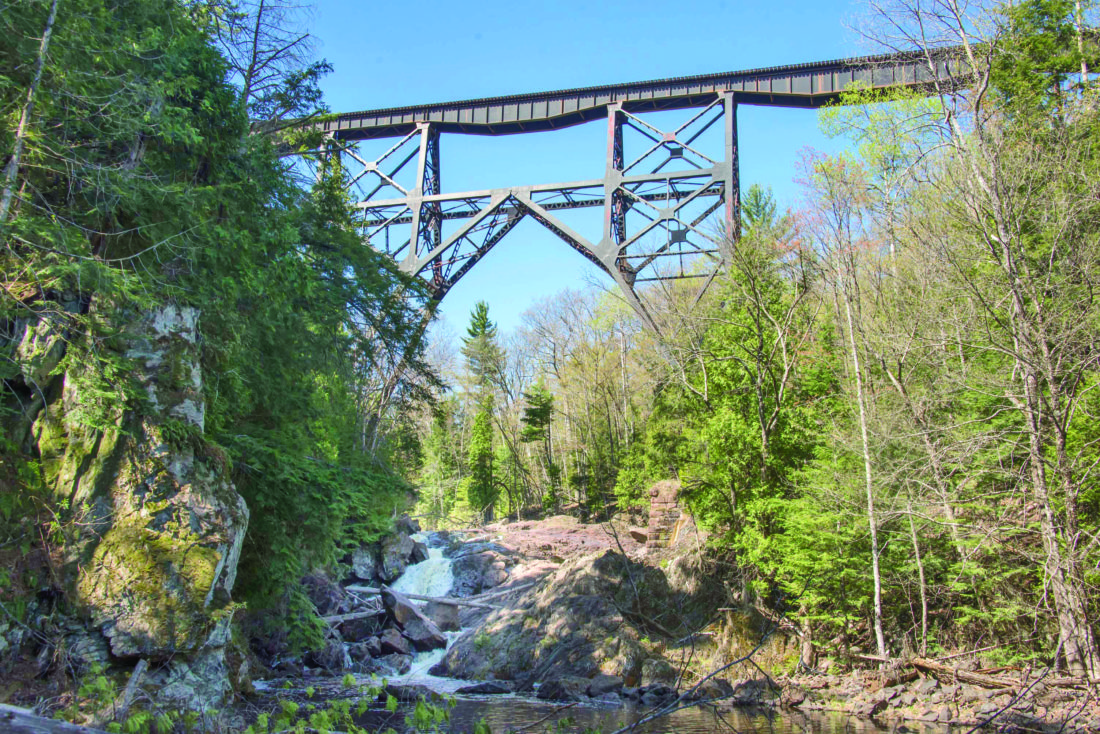 This is a remote scene that could be better accessible to the public should the proposed Dead River Community Forest become a reality. The Upper Peninsula Land Conservancy is applying for grants for the project, with fundraising also to take place. (Photo courtesy of Christopher Burnett)

After all, she said the land is where people recreate and work, and basically is why people live here.

The UPLC already is the steward of the 123-acre Vielmetti-Peters Reserve, located at the end of Brickyard Road in Negaunee Township.

“The McClure Basin Association owns a ton of land out in that area, and they were looking at developing the land north of the Vielmetti-Peters for housing,” Denham said.

However, she pointed out that the only way to get to that piece of property was by building a residential road through the Vielmetti-Peters Reserve, which is not a community forest.

The UPLC was unwilling to allow that sale, but the association was willing to sell land to the organization — a discussion that Denham said has been years in the making.

There could be positive results.

“They’re excited about it,” Denham said. “They want to see the land taken care of also.”

The MBA will sell 161 acres adjacent to the Vielmetti-Peters Reserve, and is the entire north boundary all the way up to the Dead River, she said.

It also will donate a 25-acre parcel near the new Marquette County Road 510 bridge.

“They have lots of different land, and they have these miscellaneous pieces that they don’t have any use for, and so they said, ‘Why are we paying taxes on these? Maybe it should be in the Conservancy,'” said Christopher Burnett, UPLC executive director.

UPLC has submitted two major grant requests and formed a network of partners to purchase the 161 acres, and is working with local trail organizations to create multi-use trails that will allow public access while ensuring the long-term health of the riparian forest.

Burnett said about $215,000 is needed to create the Dead River Community Forest, with one grant for $90,000 to be through the USFS.

The Community Forest Program is supporting the idea of this new community-based focus on land protection, Denham said.

“What we’re trying to do here is create a community resource more than we are ‘just another nature preserve,’ so the program is focused on ‘Are you receiving input from other people? Are you serving multiple interests of people who are going to be using it?'” Denham said.

The UPLC has been reaching out to other organizations. For instance, it has the support of Negaunee Township.

The proposed Dead River Community Forest area, however, also has varied habitats, which is good news for the wildlife that lives there.

Burnett said the site, which contains a “really cool waterfall,” mostly is mature northern mesic forest. That means it has a moderate amount of moisture, although it contains many small wetlands as well.

“Some of the biggest aspens I’ve seen in my life are back there,” Denham said.

Denham said the UPLC is partnering with the Noquemanon Trail Network to establish multi-use trails in the proposed community forest.

One of NTN’s projects will be on Brickyard Road, so the forest would contain a spur trail.

The focus of the proposed community forest will be on scenery and protection, Denham said, although the trails will be open to mountain bikers, hikers, birders and other people who want non-motorized access.

People could enter the community forest through the Vielmetti-Peters Reserve, she said.

Burnett also noted there is an existing trailhead and parking lot with a restroom, operated by the Marquette County Road Commission, where people can stop at the 510 bridge and take photos of the surrounding scenery.

That could be another access, he said, with the UPLC running trails from that spot.

The community forest site is unique in another way.

One part of the forest contains pieces of the Sudbury meteorite, which hit the Sudbury, Canada, area about 1.85 billion years ago.

“Fragments of it scattered all over, and there’s some of them right there,” Burnett said. “Geologists come from all over to look at it.”

The timeline for the Dead River Community Forest becoming a reality depends on whether the UPLC is awarded grants. However, Burnett said its “legal timeline” will be three years from whenever it signs the the option to buy, which will happen soon.

That doesn’t mean it will take that long for the community forest to be created.

“We’d like to get it done in a year or two,” Burnett said.

Denham said the grants being sought are in the $160,000 range, so the best-case senario for the UPLC would be having to raise only about $60,000. If it isn’t awarded the grants, though, the organization would have to raise the entire amount.

Burnett said the Upper Peninsula Environmental Coalition also gave the UPLC a $10,000 development grant so the organization could work on the project.

Should the project come to fruition, hikers could get a glimpse of rarely seen sights.

One of those is Trestle Falls. According to waterfallsofthekeweenaw.com, these waterfalls are among Marquette County’s most impressive sights — and also one of the least known waterfalls. The LS & I Railroad crosses a steep river gorge, and below the tall steel trestle, water pours over a two-tiered drop.

Were the UPLC to purchase the property, it would build a trail through that property to a point where the waterfalls could be seen legally, Denham said.

She said the UPLC also plans to use one section of the land for sustainably managed timber, but especially wants to use it as a demonstration site that would include small areas to show people how they can manage their own land for things like maple syrup and mushrooms.

“It will be kind of a big educational spot for people who own small parcels of land,” Denham said. “How can you manage your land to prepare it for climate change, to manage it as a sustainable forest?”

The UPLC plans to hold an off-trail hike at 10 a.m. July 21 so the public can explore the proposed Dead River Community Forest. The hike will take people beyond the edges of the Vielmetti-Peters Reserve.

The UPLC would own the land and have the final say, he said, but there would be a process for public input.

“This is forever,” he said.

This is a remote scene that could be better accessible to the public should the proposed Dead River Community Forest become a reality. The Upper Peninsula Land Conservancy is applying for grants for the project, with fundraising also to take place. (Photo courtesy of Christopher Burnett)