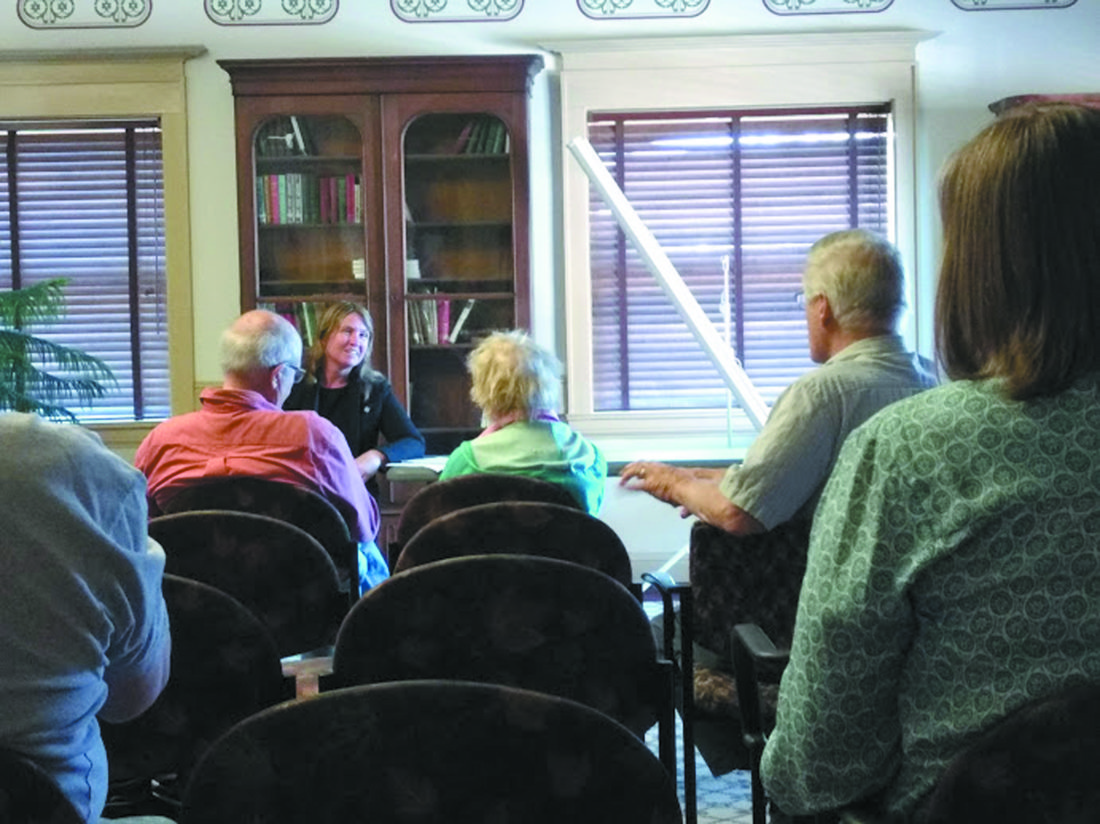 MARQUETTE — Health care, education, the recently passed Michigan budget and jobs were among some of the subjects state Rep. Sara Cambensy, D-Marquette, discussed Wednesday evening during a town hall meeting that was held at the Peter White Library in Marquette.

Cambensy, who is serving her first term in the Michigan House of Representatives, represents the 109th House District, which comprises Alger, Luce and Schoolcraft counties and part of Marquette County. She will be running for re-election in the November elections.

Cambensy regularly hosts town hall meetings or coffee sessions, as they’re also called, that stand as open-dialogue discussions between the public and herself.

“Listening or coffee sessions like this are important for me because, in a way, it’s helping me figure out where we’re short,” Cambensy said. “I think of the Michigan that I grew up in … we were the economic engine that the other Midwest states looked to and said, ‘How did they do it? They got the car industry, mining, forestry, a lot of small businesses.’ Now we’re struggling because industries and businesses aren’t talking about how we’re training people and what we’re really pushing them to go into.”

Cambensy explained there needs to be more hands-on guidance and specialized courses in high schools and that a lot of students are leaving without retaining soft skills that are necessary for successful career paths.

“The one thing that both sides seem to agree on is we have to get back to getting those programs back in the high school,” she said, explaining that CTE program courses give students experience and can generally be credited toward a post-secondary degree.

An audience member asked about Gov. Rick Snyder’s Marshall Plan for Talent, which Cambensy called a “plan in progress.”

According to the state of Michigan website, the plan calls for investing $100 million in new funding dedicated to innovative programs, including competency-based certification, assistance for schools to improve curricula and classroom equipment, scholarships and stipends, and support for career navigators and teachers.

In regards to the recently passed Michigan budget, Cambensy said the OK2Say program received an increase.

OK2Say allows anyone to confidentially report tips on criminal activities or potential harm directed at Michigan students, school employees, or schools. About $58 million in new funding for school safety initiatives, which includes school safety grants, school mental health counselors and OK2Say enhancements, was added to the budget for fiscal years 2018 and 2019.

Schools will also receive a $240 increase per pupil, which is the highest “amount of money seen since 2012,” Cambensy explained.

“Every district that I represent will get the $240 per pupil,” she said. “The only thing that didn’t set well with me and many of my colleagues (with the budget) is that they did take $800 million out of the K-12 School Aid Fund and give it to our universities and our community colleges. Some people might say ‘Well, that’s not entirely bad,’ except that typically that funding comes out of our general fund.”

Another subject discussed Wednesday was the state’s current healthcare system.

“One thing I saw early on in Lansing is we had the Medicaid expansion to kind of get away from the ER visits, which are very costly. They raised everyone’s insurance to help pay for them and the Medicaid expansion was a way to get more coverage (and) preventative care to the people who make under a certain amount of money,” Cambensy said. “Well, now that we have more people on it, they’re saying there’s too many on it and we need to get away from that again. Now we’re swinging back to more people going without insurance.”

Several people suggested that a single-payer health care system would bode well for the country.

Ruth Ziel, a retired registered nurse, said she worked in an ER for 25 years.

“I took care of people whose insurance wasn’t that good in Michigan because they were from Ohio,” Ziel said. “They elected to drive with a badly bleeding ulcer from Michigan to Ohio because they couldn’t afford what they were going to have to pay. The reality of all of this is, this is one big country.

Cambensy said it all boils down to both sides working efficiently together, which has been difficult to accomplish.

“If both sides aren’t working together and compromising to get a good end product … that’s why you don’t see a lot coming out of Lansing right now,” she said. “There are those fractions that are on the polar ends. It becomes really difficult when you have that power on both ends preventing us in the middle that are really trying to work to get stuff done.”