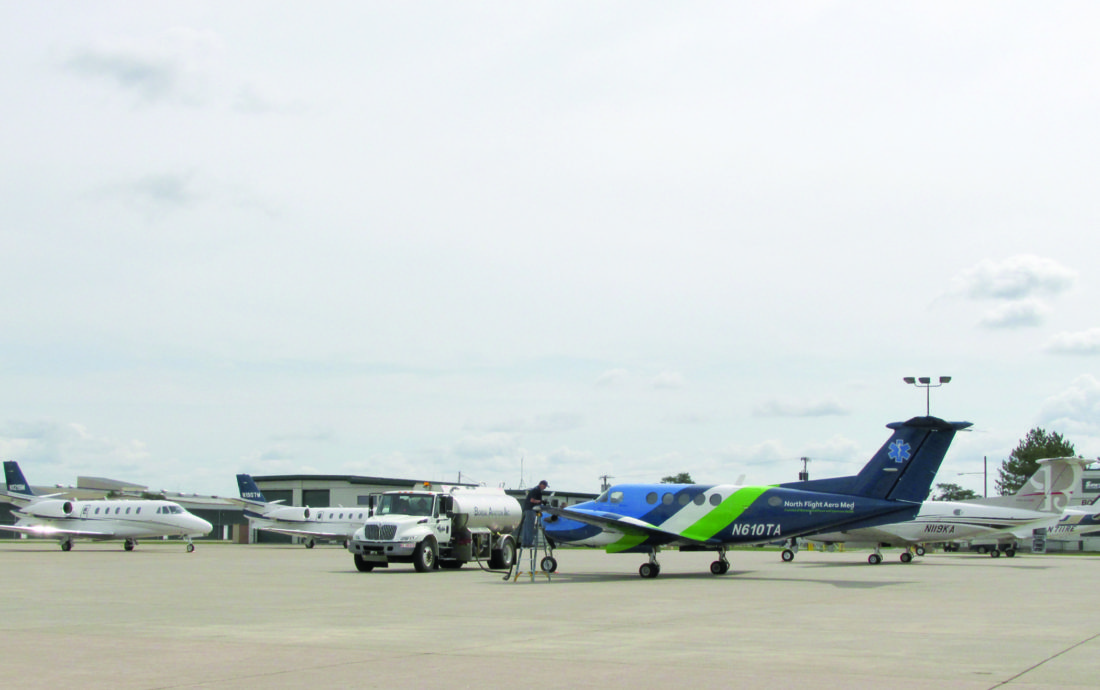 MARQUETTE — It’s going to be a busy summer at Sawyer International Airport. Major construction projects, the addition of a fifth flight to be offered seven days a week and a security-status upgrade are all slated, along with the airport’s extensive regular operating activities.

The airport’s 300-foot-wide, 12,370-foot-long runway will be shortened to 9,070 feet and fully rehabilitated over the summer.

“Currently, it is the biggest single runway in the state of Michigan,” said Steve Schenden, Sawyer’s director of operations.

The runway’s length is due to its previous use by the U.S. Air Force, which operated the K.I. Sawyer Air Force Base between 1955 and 1995 — the Air Force needed a long runway to accommodate large planes, such as B-52s, during the Cold War era, Schenden said.

However, with the airport now owned and operated by Marquette County for commercial, general aviation and cargo planes, the full 12,370 feet of runway is costly to maintain and not needed.

“At the end of this summer, we’ll be at 9,000 feet, which is still a pretty good runway,” said Schenden, noting that the runway will still be a half-mile longer than many runways at airports of similar size.

However, the 3,300 feet of runway at the north end won’t be torn up in the construction. Rather, it will be painted with stripes to indicate that it is no longer part of the runway. Schenden says that if the additional 3,300 feet is needed in the future, it could be repaved and put back into use.

The planning of the runway construction work has required extensive coordination between the airport and airlines to minimize service interruptions over the months of construction, Schenden said.

The summer construction is expected to wrap up in September, with crack sealing to be completed the following year.

Beyond runway updates, the airport will also expand its offered flights this summer, allowing it to serve more customers.

The airport has been steadily increasing the number of passengers served in recent years, with the passenger count having increased 33 percent since 2012, said Duane DuRay, airport manager. In 2017 alone, the airport’s total passenger count was 102,000.

In June, the airport will begin to offer five flights seven days a week. Two of the flights will be to Chicago, two will be to Detroit and one will be to Minneapolis.

In addition to expanding flights, the airport will be upgraded from a category IV security airport to a category III in mid-summer, making it the only category III airport in the Upper Peninsula, DuRay said.

This has big implications for the airport, as it will be able to accept larger scheduled passenger aircraft that carry more passengers, which will allow the airport to serve more travelers.

However, passengers won’t experience any differences in security screening or procedures, as the changes are all “behind-the-scenes,” measures to create a safer, more secure airport, DuRay said.

Regardless of the security upgrade, DuRay and Schenden stressed that passengers should arrive at the airport two hours before their flight leaves.

“You may wait around a little bit but that’s a lot better than standing there watching your plane take off,” Schenden said.

Schenden said one of the biggest misconceptions surrounding the airport is “that the airport controls the airlines,” but the airlines are independent of Sawyer and the airport does not dictate airline policies.

Beyond commercial airlines, the airport also hosts and serves general aviation operators, which allow private planes to fly in and out of Sawyer. Notable visitors who arrived on these private planes include Presidents George W. Bush and Barack Obama.

Even for those who don’t fly out of Sawyer, Schenden said, the airport still provides important services, as it is used by mail and cargo aircraft, as well as for general aviation and military “touch-and-go” exercises. All of these services provide benefits that ripple outward into the community, such as economic development, he said.

Beyond the basic activities that normally would be associated with operations of an airport, Sawyer International Airport also maintains and operates dozens of buildings formerly owned by the Air Force.

“It’s all stuff that we deal with out here with a fairly limited crew,” Schenden said.

It’s a huge complex that is supported with a conservative budget, DuRay and Schenden said.

The biggest challenge, Schenden explained, is maintaining all the facilites with the funding and the staff available.

Many of the buildings are required to be under airport ownership due to the Federal Aviation Administration airport layout plan, but the airport leases as many of these buildings as it can to a number of private owners and industries.

The leased buildings host a wide variety of businesses and agencies, which Schenden says has helped with economic development at K.I. Sawyer.

These businesses include Argonics Inc., Superior Extrusion Industries, Global Response North Corp. and many others.

“A lot of this stuff has been reused … there’s a lot of success stories out here,” Schenden said, noting that around 1,000 people are now employed at K.I. Sawyer.

The airport, along with education and health systems, are three crucial factors for community and economic development as these resources can attract and retain the people and industry vital to the area’s economic health, DuRay said.

“That’s a value that doesn’t show up in our budget,” Schenden said.