Chocolay Township goes back to the drawing board 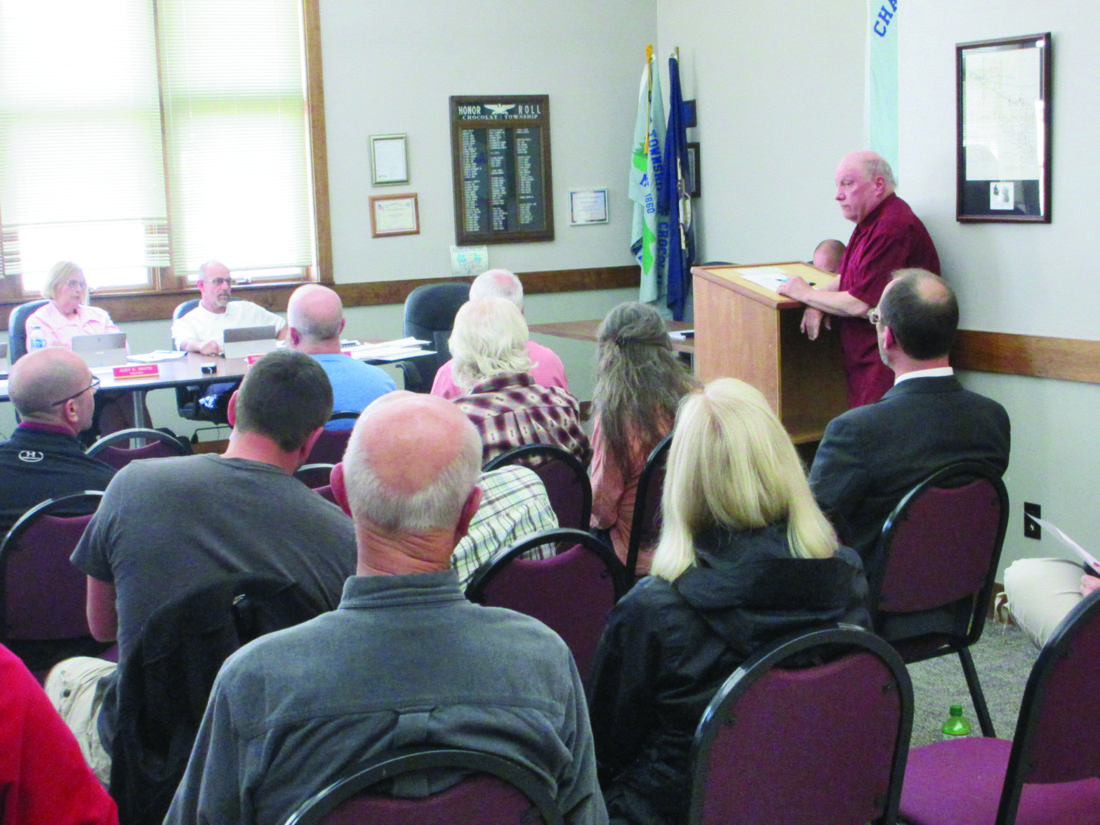 MARQUETTE — The Chocolay Township Board will send the question of short-term rentals back to its planning commission.

In a 6-1 vote during a contentious meeting Monday, the board approved the first reading of zoning ordinance amendments including updates to existing definitions and other language and site plan review revisions, but removed from consideration any language relating to short-term rentals.

Chocolay Township Clerk David Lynch made the motion to approve all language changes except anything referencing the rental issue, and to “send that back to the planning commission for further clarification — to strengthen it. I think it is too weak right now and it becomes the wild west if we approve that language as is.”

Board Trustee Mark Maki, who cast the sole nay vote, said that the direction the board gave to the planning commission was improper.

“You gave them no time frame, you gave them no specifics, you just threw it back, so now again we will be sitting for another three to six months,” Maki told the board.

Short-term rentals were not specifically addressed in the ordinance language, but under the proposed changes, “rental dwellings” would be added as a permitted principal use in the commercial, agricultural and residential districts of the township.

Rental dwelling is defined by the ordinance as “a dwelling unit providing temporary accommodations for periods of one day or more for a fee; does not include bed and breakfast, group homes, hospitals, hotels, nursing homes or resorts.”

Dozens of residents, many of them from Lakewood Lane, attended the meeting and expressed concerns ranging from the transparency of the process; the lack of any type of registration inspection or other requirements for short-term rental included in the zoning updates; the assertion that the rentals are illegal in the township based on current zoning ordinance — a situation that some say has not been enforced; and a second assertion that the concept of short-term rentals doesn’t align with the township’s current master plan.

“It falls well below current planning and professional zoning standards and is an overly simplistic approach,” Emerson said. “And it’s not just me saying this — last month, the Marquette County Planning Commission voted unanimously to not support these proposed changes to our ordinance concerning rentals.”

In an April 5 letter to township officials, Mike Touchinski, secretary of the Marquette County Planning Commission, said while municipalities should be permissive of rentals, allowing all rentals as permitted principal uses “would take away the Township’s ability to apply conditions that might otherwise be suitable under a special use permit.”

“The Chocolay Township Master Plan references allowing short-term rentals as a special use in the Waterfront District,” the letter states. “The plan also references needing a definition for short-term rental. The master plan should always be consulted when making zoning amendments.”

Township Planning Administrator Dale Throenle said while he respects the opinion of the county panel, the master plan is intended to be a guide.

“The planning commission shall make and approve the master plan as a guide for development within the planning jurisdiction,” Throenle said, reading from a section of the act. “Nowhere in this planning enabling act does it say we have to follow what is in the master plan.”

Emerson said current real estate industry standards define rentals with durations of more than one month as long-term and those that are less than a month as short-term. Short-term rentals can also be broken into owner-occupied “Tourist Home STRs” and non-owner-occupied “Vacation Home STRs,” Emerson said.

“It is well documented that each of these rental types of use exert very different stresses on adjacent residential properties, thus the standard now for planning and zoning is to treat each of these types of rentals as discrete and separate uses for different zones,” Emerson said.

Throenle said short-term rentals have been in existence on Lakewood Lane since the late 1970s and there have been very few, if any, documented problems.

“It’s about neighbor getting along with neighbor,” Throenle said in a phone interview on Tuesday. “There is a heavy implication that these people from the outside are causing all the problems on Lakewood Lane, and that is just not true.”

Some Lakewood Lane residents at the meeting felt the problems or complaints with short-term rentals may not have been recorded by the township up to this point.

Deborah Mulcahey said she and others opposed to the rentals on Lakewood Lane submitted a petition containing 187 signatures to the township on Aug. 30.

“Currently the Chocolay Township Zoning Ordinance indicates that short-term rentals are neither permitted or conditional use in the waterfront residential district,” the petition states, which Mulcahey said appeared to carry very little weight for township officials.

“My summary for what the township proposed was to allow STR’s throughout the entire community, except the industrial area, without any registration, inspection or requirements,” Mulcahey said. “In essence, the township was not working to protect the resident’s health, safety and welfare.”

Throenle said the recent tightening of other ordinances were, in part, a response to public health and safety concerns expressed by township residents, including those of Lakewood Lane.

“The noise and fireworks ordinances were put in place to put more bite into what the police department can do,” Throenle said. “The whole idea was to go after the fireworks and the noise and take on the very issues that those people are complaining about.”

Mulcahey said one solution proposed by homeowners might be to remove the Lake Superior side of Lakewood Lane from the waterfront residential district.

“We do not want STR’s on Lakewood Lane.” Mulcahey said in an email on Tuesday. “If the residents of the AF (agricultural and farming) district want to continue to allow STR’s, as the existing definition of Resort would allow – in their district that is up to them. We also support STR’s being allowed in the commercial district since STR’s are a commercial enterprise.”

Throenle said writing zoning ordinances that are appropriate for everyone in the township requires balance.

“From the standpoint of having all these rules and regulations, are you going to put them on the backs of the residents in terms of how to enforce them? We have to have a balance of language, not to make to the point that it is overbearing to everybody and also to consider with what resources do we enforce this,” Throenle said. “We have to consider what is fair to all people that live here, and that comes back to — are you, the individual who owns the property, doing everything you can to maintain the property and be a good neighbor?”