Much of the propane used in the U.P. comes from Line 5 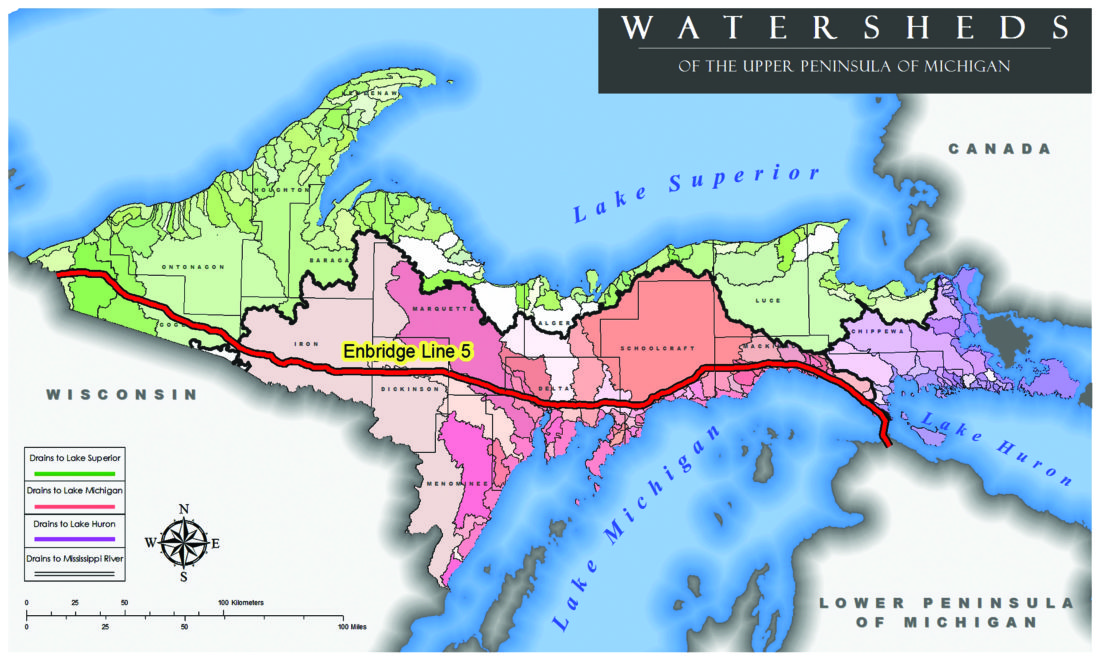 MARQUETTE — There is no emergency plan on the books to oversee propane distribution in the Upper Peninsula should Enbridge Line 5 cease to function for an extended period, sources confirm, even though nearly two-thirds of the propane used annually in the region originates from the controversial pipeline.

The liquified petroleum gas or propane is removed from petroleum products flowing through Line 5 at a facility near Rapid River in Delta County and sold throughout the region, according to Don Steckman, supervisor of Ferrellgas, the U.P.’s largest propane retailer with offices in Negaunee. Local distributors will be left to their own devices should Line 5 stop producing, he said.

“The problem with the plan … is there is no plan,” he declared in a recent interview. Losing Line 5 “would be a much bigger problem than people realize, much, much bigger.”

For many, Enbridge Line 5 is recognizable due to the significant publicity and government scrutiny it has received in the past several years relating to the fitness of the 5-mile section beneath the Straits of Mackinac and what might happen should a petroleum spill occur at that point.

While Steckman said he recognizes and is sensitive to environmental concerns and attendant calls to shut the line down, “losing Line 5, you just can’t talk like that. It’s too important.”

Originally built in 1953 by construction giant Bechtel Corp., Line 5 snakes its way east from Superior, Wisconsin, across the U.P., south beneath the Straits of Mackinac and through the Lower Peninsula to Sarnia, Ontario, nearly 700 miles.

It delivers some 23 million gallons of petroleum products obtained from the Alberta tar sands and other operations in western Canada and North Dakota each day through a 30-inch pipe. Roughly 32 million gallons of propane is produced in Rapid River each year, he said.

The Rapid River production facility is owned and operated by the Canadian company Plains Midstream. Plains Midstream, in turn, sells propane directly to local and regional distributors such as Ferrellgas, which has more than 10,000 customers in the U.P.

“We’ve been trying to convey the importance of Line 5,” said Ryan Duffy, a communications strategist and community engagement official with Enbridge, based in Lansing. “If you lose 65 percent, that’s a big deal.”

Although it’s difficult to estimate with any certainty just how big a deal it might be, Steckman suggested circumstances that occurred in 2014-15 might provide a measure of insight into what could happen if Line 5 propane production were lost for an extended period.

The winter of 2014-15 saw bitterly cold temperatures for long periods of time, he said, which caused people to turn their thermostats up. In addition, that fall was unusually wet, forcing many area farmers to further drain propane stocks in the drying of their crops.

“They use a lot of propane, huge amounts,” Steckman said, referring to the crop drying procedure.

Then, a third complicating factor emerged. The Cochin Pipeline, a line which runs from Windsor, Canada south of Chicago and then northwest to Fort Saskatchewan in Canada, which had been historically used to transport petroleum/propane, became unavailable.

“That’s when propane prices went crazy,” recalled Blake Olson, Enbridge’s manager for northern Michigan working out of offices in Escanaba. “It was kind of like a perfect storm.”

Propane costs skyrocketed to as high as $6 per gallon, up from the typical $1.50 or so, said Steckman, who, until January, sat on the board of directors of the trade group Michigan Propane Gas Association.

There are as many as 15 propane companies in the U.P., retailing product to residents and businesses, he said. During that tough winter, there were spot shortages as some of those companies struggled to get sufficient supplies to customers. Because of existing contracts, Ferrellgas was able to obtain additional propane from outside the area. Others, however, weren’t as fortunate.

“In 24 years (in the propane retail business), that was the toughest winter I ever had,” he recalled.

Steckman estimated that it would take as many as 3,600 trips into the U.P. from tractor-trailer rigs, each with a 9,000-gallon capacity, to haul enough propane to replace Line 5 production annually. Problem is, he said, that transport doesn’t currently exist and much of it would likely have to be built.

“And you can imagine what that traffic would do to the roads,” he said.

In addition, a refinery in the Chicago area where additional propane could be produced in large quantities might need several years to ramp up production to meet demand caused by the absence of Line 5.

“It isn’t a pretty picture,” he said.

The Great Lakes advocacy group FLOW — For Love of Water — based in the Traverse City area, takes a different view. FLOW maintains that only 35 to 50 percent of the Upper Peninsula’s propane comes from the pipeline, far less than the 65 percent Enbridge claims.

“FLOW’s latest research shows that one to two rail cars or a few tanker trucks a day could replace Line 5’s propane supply if the state decommissions the pipeline to prevent a disastrous oil spill in the Mackinac straits,” FLOW relates on its website.

Further, the FLOW website states about 18 percent of the U.P. relies on propane for heating, with the average household using 770 gallons a year. That works out to be about 47,000 gallons a day, which could be covered by increased truck or rail transportation.

Several calls to FLOW seeking comment for this story were not returned. Neither were calls to the National Wildlife Federation, which has closely studied Line 5 for several years. However, an NWF online blog entry from May 2017 includes an informational graphic that suggests three alternatives to propane from Line 5:

Option 1: Expand and de-bottleneck propane processing at the beginning of Line 5 in Superior, Wisconsin. The processed propane can be delivered via tanker truck or rail car.

Option 3: Increasing the storage capacity at the Kincheloe processing plant to meet all of the U.P.’s propane needs.

The graphic is tagged with, “We can live without Line 5, but not without the Great Lakes.”

Although the state of Michigan currently has no official plan to address the loss of Line 5, that doesn’t mean state officials are unaware of the potential problem, according to Nick Assendelft, a media relations and public information officer with the Michigan Agency for Energy, which is part of the Michigan Public Service Commission.

In the event of a disruption in Line 5, the state would work with the federal government and private industry partners to develop solutions that will be least disruptive to Michigan’s citizens, Assendelft noted in an email response to The Mining Journal.

“We’ve had discussions in the past and continue to have discussions with our partners about procedures and options that would be available should there be a disruption in any part of Michigan’s utility infrastructure,” he said.

State Rep. Sara Cambensy recognizes Enbridge’s Line 5 strikes an emotional chord in many people, and not unreasonably, given the environmental calamity that would likely be unleashed through a large petroleum spill in the straits.

“But the problem with everyone calling for the immediate shutdown is that no one is providing a solution for how U.P. residents would get their propane,” said Cambensy, D-Marquette.

Cambensy said she supports accelerating the study of solutions for Line 5 — something Gov. Rick Snyder has called for — to arrive at an early decision.