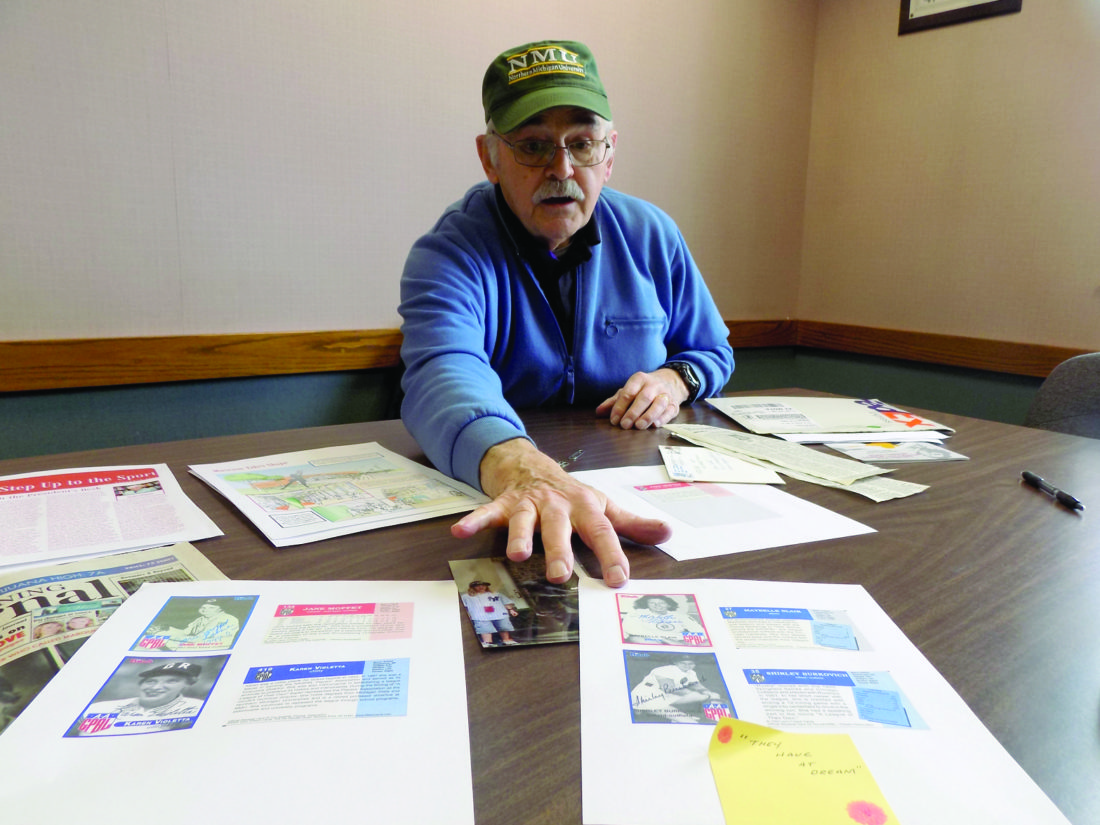 Jack Kunkel, the husband of the late Karen Kunkel, a local sports visionary, looks over materials related to one of her dreams: the International Women’s Baseball Center. The center is to be located in Rockford, Ill. (Journal photo by Christie Bleck)

MARQUETTE — It’s something the late Karen Violetta Kunkel would have wanted.

Kunkel, who died in December at age 83, was an administrator, professor and professional women’s baseball player who played for the Grand Rapids Chicks, among other things, and was instrumental in establishing the United States Olympic Education Center at Northern Michigan University, now known as the NMU Olympic Training Site.

One thing she — and other former female baseball players — strongly favored was the International Women’s Baseball Center.

Plans call for a museum and educational facility to be built across from Beyer Stadium, home to the former Rockford Peaches, in Rockford, Illinois. In fact, the center was dedicated Sept. 3, with visits from “A League of Their Own” actresses Tracy Reiner and Anne Ramsay.

In a “From the President’s Desk” column penned by IWBC President Kat Williams in the December issue of its “Step Up to the Sport” newsletter, Karen Kunkel’s name was prominently featured.

“Her dedication and stubbornness were legendary, and it was on the rock of that dedication that the IWBC was founded,” Williams wrote.

Williams said that for many years, Kunkel, along with former AAGPBL players Shirley Burkovich, Maybelle Blair and the late Jane Moffet, dreamed of building a museum and educational center that would preserve and support the history of girls and women in baseball.

“Karen did not see the architectural design for the center produced by Cambridge 7 Associates,” Williams wrote. “The sight of that dream in full color left me speechless, but would have given her only a moment’s pause before she went to work raising the money to make those images come to life.”

Kunkel also would have been excited by the educational programs planned for the Rockford area this year, even before the first brick of the building is laid, she said.

The idea goes way back to a reunion among former All-American Girls Professional Baseball League players.

“At that very first reunion, there was some talk about, ‘Gee, it would be nice if we had a place where we could put all of our memorabilia,'” Jack Kunkel said in a Tuesday interview with The Mining Journal. “So, it just became an idea.”

The Kunkels’ son Scott said: “My mom was kind of influential of looking ahead.”

She apparently was forward-thinking in another way. His mother, he noted, realized how important museums and halls of fame are to history.

To say the least, Karen Kunkel had a varied and interesting background in baseball, on and off the field.

Jack Kunkel said a 1980s reunion in Cooperstown, New York, where the Baseball Hall of Fame is located, linked his wife, who emceed the event, with director Penny Marshall. It was there that Marshall told her she had seen a documentary on women in baseball.

She later became a “consultant for originality” for “A League of Their Own,” which Marshall directed.

“Karen kind of got the message that she was going to be working in conjunction with Penny to make this thing not a comedy and to show that these women had some talent,” Jack Kunkel said.

With the AAGPBL players dying off, though, his wife pushed the museum idea.

Jack Kunkel said she and Moffet, both educators and catchers, decided to be a “team of two” to promote the concept.

They approached a Cooperstown administrator to suggest an annex for the women, which although was in the film still doesn’t exist in real life. Another visit resulted in a statue being installed outside, which he called a breakthrough for the women.

Still, it wasn’t exactly a separate Hall of Fame wing for the women.

However, “A League of Their Own” was a big hit.

Jack Kunkel said his wife and Moffet noticed other players were capitalizing financially on the film’s popularity.

The message Karen Kunkel and Moffet had was: “There has to be something when you’re gone.”

Jack Kunkel said they finally realized there was a way they could accomplish both, but had no idea how to go about it.

So, Karen Kunkel, Moffet, Burkovich and Blair got to work.

Rather than creating a museum strictly for the AAGPBL, they decided to go international and create the IWBC, he said, since women in many countries play baseball.

“They split from the league, so to speak, and went their own way,” said Jack Kunkel.

The city of Rockford really got behind the effort.

“Rockford has come up with lots of dollars to make this thing come together,” said Scott Kunkel, who pointed out the project is in its infant stages.

It also involves a lot of volunteer work.

“The people that are working this darn near full time for zero dollars right now, they have jobs,” the younger Kunkel said.

The focus now, Scott Kunkel said, is fundraising and determining the “inner workings” of each room at the center. One room, which will be called “The Catcher’s Den,” will be dedicated to his mother and Moffet.

He credited Blair and Burkovich with continuing the effort, pushing the dream to the point where the city of Rockford became involved.

People who want to help the project come to fruition, however, don’t have to live in Rockford, Illinois. To become an IABC member and help the cause, they can visit www.internationalwomensbaseballcenter.org.

Education will factor greatly into the IWBC.

Karen Kunkel no doubt would be pleased.