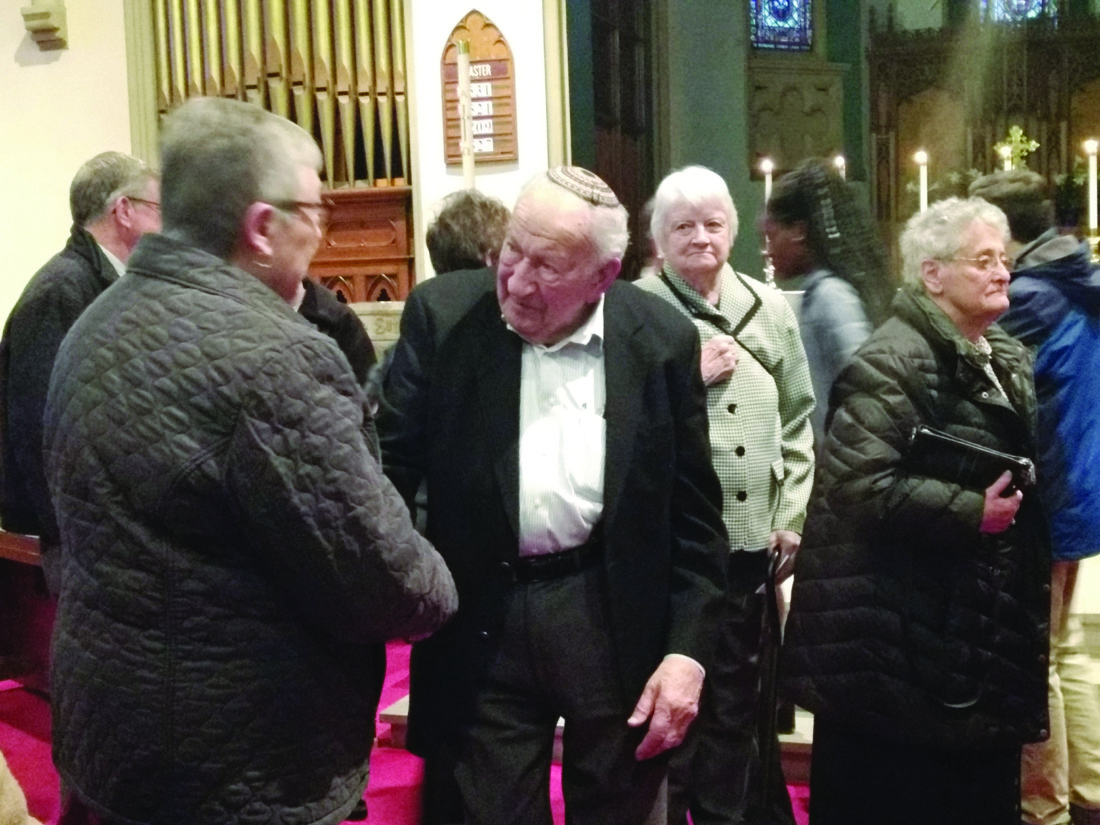 Even though his family tried to flee, most of them were eventually captured by the Nazis. Lowenberg survived as a slave laborer in the concentration camps, but his family, aside from his sister, Eva, who had also been captured, perished at Auschwitz.

Since then, Lowenberg, now 90 years old, has spent most of his adult life speaking to different communities and schools about the Holocaust, calling the presentation “Hate Hurts but Love Heals.” At the annual Holocaust Memorial Service held Tuesday night at St. Paul’s Episcopal Church in Marquette, Lowenberg was the featured speaker in recognition of Yom HaShoah, also known as Holocaust Remembrance Day, which occurs on the 27th day of the Jewish month of Nissan.

At the service, Lowenberg recalled his experiences during the beginning phases of the Holocaust until the liberation of concentration camps near the end of World War II.

“When I came over to this country in 1946 after being liberated from six different concentration camps, people used to say, ‘He’s a refugee,’ and for the longest time I was a ‘refugee.’ Then I became a ‘newcomer,'” he said. “It took many, many years until people realized what a Holocaust survivor really means and is.”

In 1936 Lowenberg was beaten by fellow children in a public school at the request of his teacher after being accused of sticking his tongue out at a poster of Hitler. He was then sent away for two years to a Jewish boarding school with limited visits to his family permitted.

During his time at the boarding school, Lowenberg’s mother gave birth to twin boys.

On Dec. 8, 1941, Lowenberg and his family were deported to Latvia’s Riga Ghetto after four days and nights of traveling in a filled boxcar with little clothing and no food.

“That was the beginning of the suffering,” he said. “We had to walk for five miles when we arrived in deep snow. All we had were shoes and our socks (and) they got wet and our feet were frozen. Imagine my two little twin brothers, they were 6 years old, and those little children were crying and so many other children were crying. I was not even a refugee then, believe me. We were victims, we were victims of our religion.”

When his family arrived at the Riga Ghetto, “the food that was already there was left by natives from Latvia, who had been, only days before, taken away to a place in the forest” and slaughtered, he said.

“They killed 3,000 Latvian Jewish people right there with machine guns. Yes, those were the times. Who could ever remember? Who could ever forget?,” Lowenberg continued. “People told us, ‘Because of you we had to make room.’ We didn’t ask them for that.”

In July 1943, Lowenberg and his sister were sent to separate camps as slave laborers. Their parents and twin brothers were shipped to Auschwitz where they were exterminated. The twins were just 9 years old.

“I had to wear a uniform with stripes, I had to have a number because I was no longer a man with a name, a boy with a name, because my new name was KL 3698,” he said. “That’s what I was, that’s who I represented.”

Lowenberg came to the United States in 1946, shortly after being liberated from the camps, and settled in the Detroit area. For work, he provided linens and other dry-goods supplies to hospitals and hotels throughout Michigan. He visited the Upper Peninsula annually on business, and later started making local visits to talk about the Holocaust.

Lowenberg is a member of the Speakers Bureau of the Holocaust Memorial Center in southeast Michigan and has spoken at various schools and communities throughout the Midwest.

Lowenberg said after the Holocaust he knew he needed to talk about his experiences to teach people about the atrocities millions of people endured during that time because of hatred.