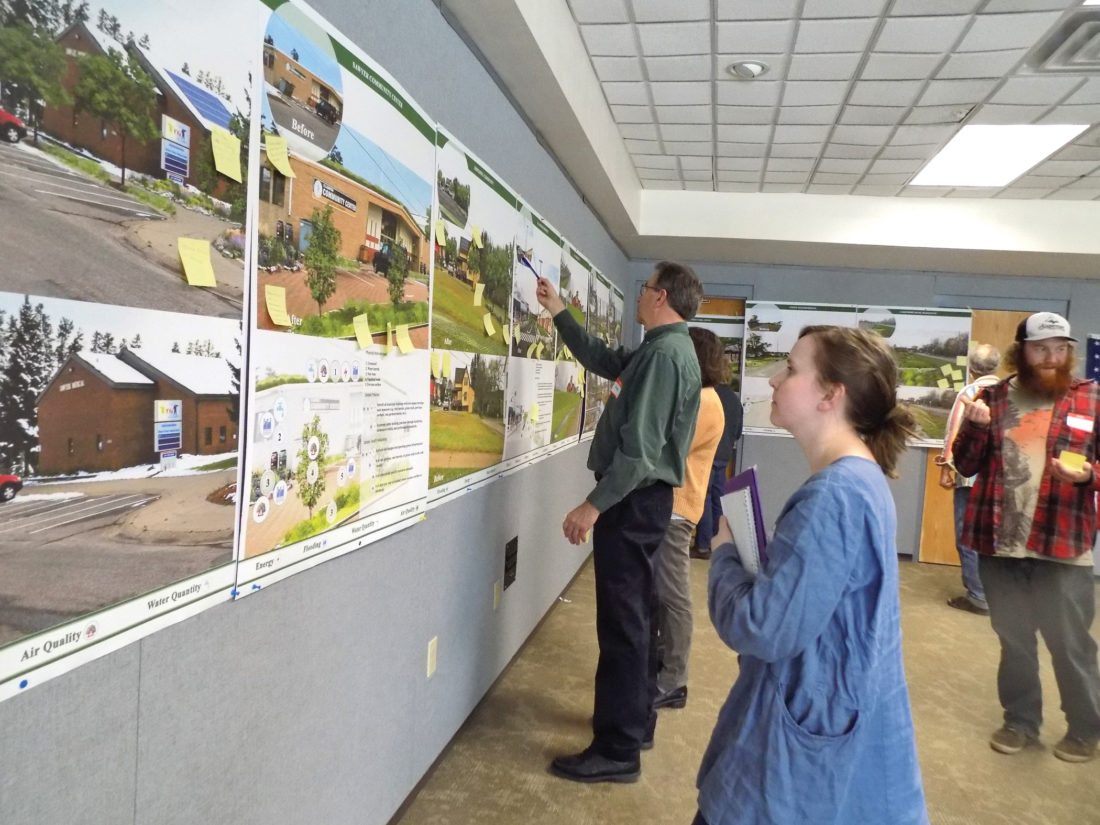 Attendees at Monday’s Marquette Area Climate and Health Adaptation Project workshop at Lakeview Arena look over visuals depicting possible designs to combat climate change in the area. The goal of the project is to produce a guidebook that can be used to reduce human health impacts from such climate change. (Journal photo by Christie Bleck)

MARQUETTE — Rain gardens, trees and other features could eventually find their way into the Marquette County landscape if various designs created to address environmental changes are implemented.

Those and other possibilities were discussed Monday during a Marquette Area Climate and Health Adaptation Project workshop in the Citizens Forum at Lakeview Arena.

The event followed a November workshop on the project.

Michigan State University Extension and the MSU School of Planning, Design and Construction are collaborating with the Michigan Climate and Health Adaptation Program, a member of the Centers for Disease Control and Prevention’s Climate Ready States and Cities Initiative, to pilot actions to prevent or reduce human health impacts from climate change in a rural community.

In this case, it’s Marquette County and the communities within it.

Brad Neumann, MSU Extension senior educator, said the Michigan Department of Health and Human Services has a grant from the CDC for the project.

The big question, he said, is: How do the communities create interventions or adaptations to mitigate the impact on human health?

One of the workshop facilitators was Yonathan Kefelegn, an epidemiologist with the MDHHS, who talked about what already is happening climate-wise.

He said climate projections suggest Michigan will experience extreme precipitation in the form of increased rainfall and flooding events, more wildfires, poor air quality, and more extreme heat days — days where temperatures are above 90 to 95 degrees.

“So, when we know all these things are happening and climate change is currently here in Marquette County and Michigan as a whole, what can we do?” Kefelegn asked.

Since 2016, stakeholders in the project have discussed climate health issues in the county, he said, with the ultimate goal being the creation of a climate and health adaptation guidebook that local planners and various community groups throughout the county — in urban and rural areas — can use.

Previous discussions that have taken place among the project’s stakeholders resulted in flooding, water shortage, water access and wildfires listed as top priorities, with ticks and air quality secondary priorities.

Getting feedback for preliminary design and policy interventions for such a guidebook was a purpose for Monday’s workshop, Kefelegn said, with the goal to present the final guidebook and implement at least one aspect in it by the end of the year.

Wayne Beyea, senior outreach specialist with the MSU School of Planning, Design and Construction, said some of the top concerns that came out of the project’s input so far included poor regional cooperation and transportation.

Visions for the area also were addressed, with a regional stormwater plan, people-centered zoning and recognizing increased flooding risk being some of the top priorities for long-term thinking.

“What does this area look like in 20 years after climate and health impacts have been fully addressed?” Beyea asked.

Amal Shaaban, a second-year Ph.D. student in the MSU School of Planning, Design and Construction, showed visuals of what various sites in the county could look like if some ideas were put in place.

For example, a section of Lakeshore Boulevard in the city of Marquette could include trails, vegetative swale and trees to decrease runoff and siphon that runoff from the road.

She also noted that since the Marquette Senior Center has experienced flooding, transforming parking space on Spring Street would help with this problem.

“We were thinking of taking a space from the parking and use it as a rain garden,” Shaaban said.

Another spot for a garden would be along the stairs near the center.

“We thought of this for beautification and also to absorb the extra stormwater runoff from the upper level,” Shaaban said.

In fact, rain gardens were a major component in the designs.

The Rain Garden Network defines such as a garden as a shallow depression planted with deep-rooted native plants and grasses that should be positioned near a runoff.

Riprap also was mentioned as a possibility at Nordeen Park in Gwinn and along the northern section of Lakeshore Boulevard.

Audience members at the workshop were asked to write their comments regarding those potential designs on sticky notes and affix them to the various posters that showed those designs.

Most were positive in nature, with one commenter saying the area along U.S. 41 by the Settle Inn should be a priority due to development in the area, plus improvements would showcase Marquette.

Beyea said the guidebook will show examples of changes that communities could implement.

“So, just because we picked one of those examples, we’re not suggesting that we do that,” Beyea said. “It may or may not make sense after further review.

“But what we do want to do is try to show visually what climate adaptation looks like, that can address some of the health impacts that also has some visual aspects to it.”

The next steps in the project are to summarize input, review and incorporate design and policy recommendations for the guidebook, and hold a summer meeting to give final recommendations.

The guidebook is expected to be ready in the fall.