Cold War in the U.P. 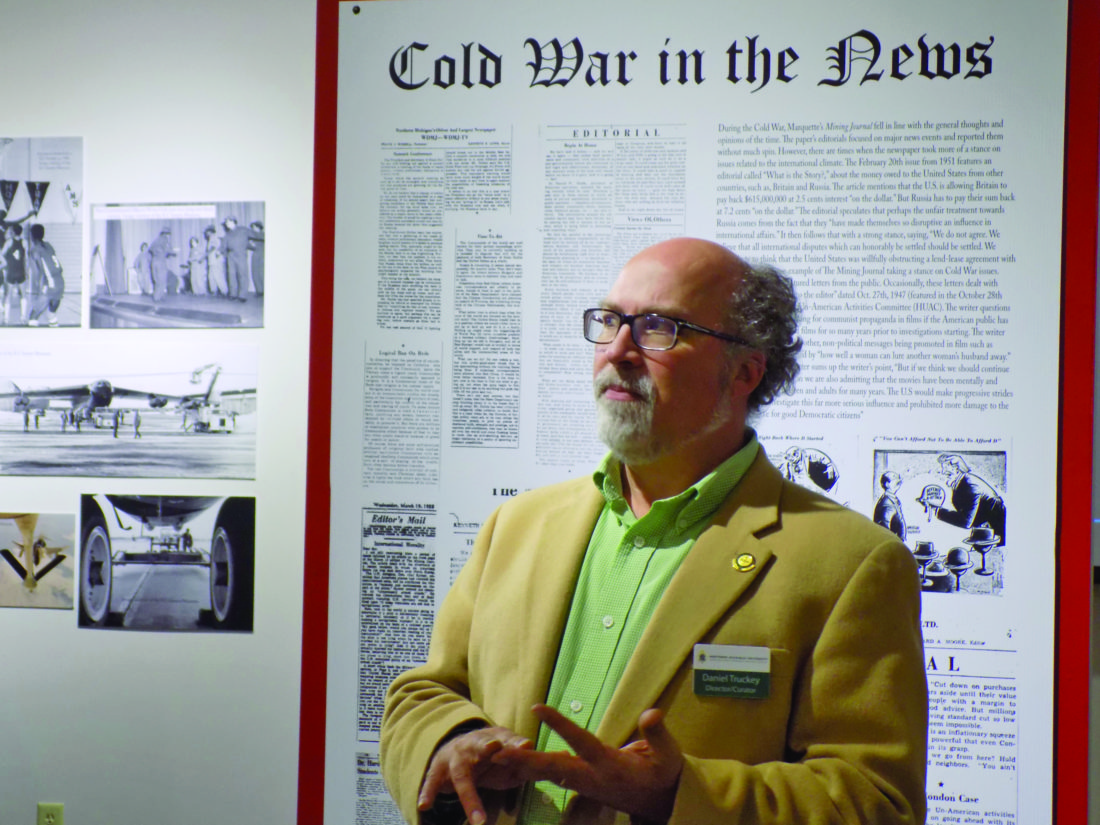 MARQUETTE — Although the Cold War, particularly in the 1950s and 1960s, was an unsettling time, it’s a bygone era. However, there might be a certain fascination — and even nostalgia — about those times.

Local residents who recall fallout shelter signs and black-and-white films like “Duck and Cover” should stop in the Beaumier U.P. Heritage Center at Northern Michigan University’s Gries Hall to view the new “Cold War in the U.P.” exhibit.

The grand opening of the exhibit, which is free to the public, took place Thursday evening.

The Cold War era was marked by a battle for political and social influence between the United States and the former Soviet Union, and the ever-present threat, real or perceived, of nuclear war.

The remote Upper Peninsula was not immune from Cold War tensions, and the new exhibit features various displays about places like K.I. Sawyer Air Force Base, dubbed “K.I. Siberia,” and notable figures like Clarence “Kelly” Johnson and Glenn Seaborg — both of whom played key roles in the Cold War.

Beaumier Director Dan Truckey spoke to the crowd that assembled at the grand opening.

“There’s a lot of younger people who don’t know much about the Cold War at all because they didn’t live it, and there are many others, like myself, who grew up in the Cold War,” Truckey said.

The purpose of the exhibit, he said, is to educate another generation about what the era was all about.

“Since our mission is the history and culture of the Upper Peninsula, what are the connections to the Upper Peninsula during the Cold War?” Truckey said. “And there are quite a few, as you see in this exhibit, just not only the military bases that were here — some of which we had no idea about until we started doing this project, and it’s really great to discover some of them — but also the individuals who were connected to the U.P., mainly Glenn Seaborg and Kelly Johnson, two individuals who had such a huge impact on the Cold War.”

Both were born in Ishpeming and lived there as children. Johnson became an aeronautical engineer who designed the most important military aircrafts of the Cold War period, including the Lockheed U-2, SR-71 Blackbird, F-104 Starfighter and P-80 Shooting Star.

Seaborg, a chemist and physicist, became one of the key researchers in the Manhattan Project as a University of California-Berkeley professor. His main job was to create the plutonium for the first atomic bomb.

Seaborg, who shared the 1951 Nobel Prize in chemistry with Edwin M. McMillan, later became chairman of the Atomic Energy Commission from 1961-71.

Probably lesser known is Kaarlo Rudolph Tuomi, who came from what Truckey called a “Finnish Communist” family in the U.P. In the 1950s, after spending time in the Soviet Union, the KGB sent Tuomi back to the United States to act as a spy.

“Kaarlo was not a very successful spy, and was quickly caught, but then became a double agent for the FBI,” Truckey said.

Tuomi still could be considered something of a mystery.

“We only have a panel about him,” Truckey said. “We have yet to find a photograph of Kaarlo. We have made a request to the FBI to get his file, because it’s over 50 years old, and we have not received it yet.

“If we get that, there’ll be an update. We’ll make an announcement about that because we’d love to have some more stuff about Kaarlo in the exhibit.”

What the exhibit does have is a makeshift fallout shelter, complete with a bunk bed as well as cans of Spam and other foods.

By the 1970s, people were no longer building these shelters.

“Everyone’s like, ‘Yeah, that’s not going to do a whole lot,'” Truckey said.

The conflict also was changing in that decade, with the Cold War starting to thaw.

The exhibit, though, evokes memories of what took place before the end.

Panels provide information about places like the former Calumet Air Force Station, a site in the Keweenaw Peninsula that closed in 1988 after having served as a long-range radar station for SAGE, or Semi-Automated Group Environment — radar responsible for tracking invading aircraft.

Yet another panel describes a mysterious occurrence that took place Nov. 23, 1953, when a U.S. Air Force Scorpion F-89 was scrambled from Kinross Air Force Base after Defense Command radar picked up an unidentified flying object over Lake Superior. The crew and jet, which were on loan from Truax Air Force Base in Wisconsin, set out to find the “blip.”

When the moment came for the jet to fly sharply down at the object and make a rendezvous at 7,000 feet, the jet and UFO disappeared from the radar screen. Neither the wreckage nor the bodies of the crew — the pilot, Lt. Felix Moncla, and the radar observer, 2nd Lt. Robert Wilson — were ever found.

It was later discovered that the “blip”was an Air Force cargo plane from Canada, although the Royal Canadian Air Force denied it was anywhere near that spot on Lake Superior.

Another display shows items like a manual typewriter, vintage clock and an Aircraft Recognition Manual published by the Civilian Defense Commission in the early 1950s. These manuals would have been used by volunteer ground observers watching for Soviet planes over U.S. skies.

Co-curator of the exhibit was NMU senior and history major Casandra Somes.

She believes closed air force bases are a crucial part of the exhibit.

“The main thing that I think is the most important about this exhibit is that you look at places like K.I. Sawyer and Kincheloe, and those are industries that the U.P. once had,” Somes said.

They represent a recurring problem with former industries in the region, she said.

“It’s having lasting impacts on the area, and I think it’s key in looking into the future, of just the economic future, of the U.P. and getting people here and maybe questioning what kind of different industries we want to get to the area again so people stay,” Somes said.

Bob Vick, president of the K.I. Sawyer Heritage Air Museum from which many items were donated for the exhibit, attended the opening as well.

Several upcoming exhibits are associated with the exhibit, including a lecture entitled “Reagan’s Strategic Defense Initiative and Project ELF” by Finlandia University professor Bill Knoblauch at 7 p.m. Thursday at the center.

A Cold War Film Festival will also be held on various nights from November through March. They will begin at 7 p.m. on their respective dates and are free to attend. A discussion with Truckey will follow each film.

On Nov. 14, two documentary films, “The Atomic Café” and “Radio Bikini” will be offered. Two classic science fiction Cold War allegories, “The Thing from Another World” and “The Day the Earth Stood Still,” will be shown Nov. 28.

For more information, contact the Beaumier Center at 227-3212 or heritage@nmu.edu.