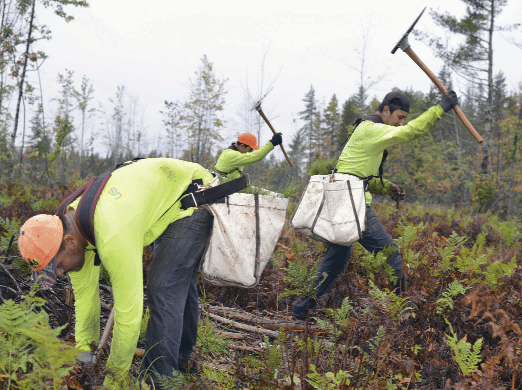 Workers from a crew of tree planters from Guatemala plant pine seedlings to diversify the tree species in this part of the basin habitat project. (Photo courtesy of the Michigan Department of Natural Resources)

A crew of tree planters took to the woods along the north side of the Dead River Storage Basin in Marquette County recently to improve spring, summer and fall food resources available for black bear, white-tailed deer, ruffed grouse and a host of non-game wildlife species.

Ninety percent of the roughly $60,000 project was funded by the Michigan Department of Natural Resources through its Wildlife Habitat Grant Program, according to a news release from the DNR. The grant program, which began in October 2013, is funded with a portion of the revenue from hunting and fishing licenses sold each year.

The DNR administers the grant program through a cooperative effort between the department’s Wildlife Division and Grants Management Section.

Green Timber Consulting Foresters, Inc. of Pelkie is the grant recipient for the Basin Habitat Project and is managing the habitat improvement project on behalf of its clients, who are the nearly 400 members of the Dead River Campers, Inc.

The campers — who provided the remaining 10 percent of the project cost — collectively own a large area of land along the Dead River Basin in north-central Marquette County, including 3,100 acres enrolled in the Commercial Forest Program open to the public and 310 acres of private property closed to public use.

“The goal of this project is to diversify wildlife habitat, provide high-quality, long-term food sources, and provide better viewing and recreational opportunities for the members of the Dead River Campers, Inc. and the public in general,” Rexx Janowiak, senior forester with Green Timber Consulting Foresters Inc. of Pelkie, said in the release. “This project is being implemented on land enrolled in the commercial forest program and therefore is open to non-motorized public use for hunting and fishing.”

Red and white pine seedlings were planted in an area where 50- to 60-year-old jack pines were cut during the winter of 2015-16. All white and red pines, black spruce and red oak found were left standing.

“The work will provide cover and a more diverse habitat for wildlife than was provided by the previous forest, which was comprised almost entirely of jack pine,” Janowiak said. “The sandy soils here are not well-suited to a wide variety of tree species, however we diversified the species mix as much as the site would allow.”

However, additional non-game species will also benefit from the effort to diversify available food resources in the area.

“Four years ago, when the new hunting license package was implemented, the DNR committed to accomplishing an expanded amount of game species habitat work across the state through partnerships. This project is a perfect example of that concept at work,” said Terry Minzey, DNR Upper Peninsula regional wildlife supervisor. “Given that there is relatively little state forest land in this general location, DNR employees spend little to no time managing the habitat in the area. With commercial forest lands open to public hunting, however, we can easily justify spending hunters’ dollars on those lands to improve the hunting conditions. The hunters in north central Marquette County will benefit in ways that were not possible before this program was implemented.”

Earlier this month, the DNR announced a total of $998,000 was awarded for 2017 under the grant program to various conservation organizations, units of government, landowners and nonprofit organizations for projects to be completed by Sept. 30, 2019.

The Basin Habitat Project was funded by the DNR under the grant program in 2016..

“We’re happy to see landowners improving wildlife habitat on property not managed by the DNR, but in consultation with the department,” said Dennis Nezich, DNR Forest Resources Division field coordinator.

The next grant application period will begin June 1, 2018. To learn more about the Wildlife Habitat Grant Program, visit mi.gov/wildlife or mi.gov/dnr-grants.

The Michigan Department of Natural Resources is committed to the conservation, protection, management, use and enjoyment of the state’s natural and cultural resources for current and future generations. For more information, go to www.michigan.gov/dnr.