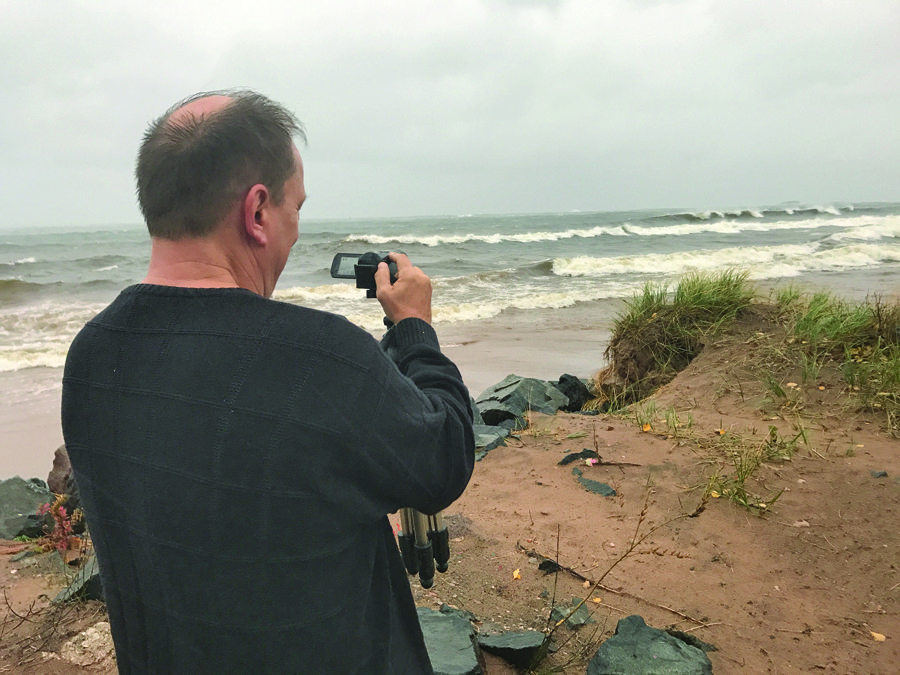 Pierre Ogea of Marquette takes video of the impressive waves hitting the shore along Lakeshore Boulevard. Most of the road was closed off at 9 p.m. Monday night and the city of Marquette will announce when it will reopen. Meanwhile, waves are expected to increase in intensity into the afternoon today. (Journal photo by Rachel Oakley)

MARQUETTE — Much of the north-central Upper Peninsula is being ravaged this morning by an intense fall storm causing widespread power outages, school closures and other damage.

Meteorologists report a storm of this severity is fairly uncommon this time of year.

National Weather Service meteorologist Matt Zika said heavy rainfall and high winds are affecting the Keweenaw peninsula, Marquette, Munising and beyond, as well as much of the central U.P. — pointing to a level of severity not seen since about 2011.

“We have a very intense fall storm affecting the upper Great Lakes and obviously producing significant strong winds and very high waves out on the lake,” Zika said. “We probably have to go back six or seven years to (find) the last time we’ve had a full-blown fall storm, high-wind storm, affecting such a large area.”

Winds have been recorded up to 70 mph over the lake and 50-60 mph on the coast and inland, Zika said. Winds will continue throughout the morning and start to subside in the early afternoon, with a total of one to three inches of rain expected.

Closure of Lakeshore Boulevard between Hawley and Wright streets went into effect Monday night and remained closed this morning.

A significant number of schools in Alger, Luce and eastern Marquette counties, including Marquette area, Munising and AuTrain-Onota public schools are closed today.

Power outages are affecting customers of the Marquette Board of Light and Power, Upper Peninsula Power Co., We Energies and Cloverland Electric Cooperative.

The BLP reported widespread outages throughout its service area staring about 5:30 this morning due to downed trees and branches on power lines. All BLP crews are working to address the outages, but no estimate of when service will return was available at the time of this report.

UPPCO spokesman Brett French said in a statement that about 6,000 UPPCO customers were without power in Marquette, Alger, Delta, Houghton and Keweenaw counties as of 10:30 this morning. Hardest hit areas include Gwinn, K.I. Sawyer, AuTrain, Calumet and Hancock.

UPPCO crews are working to address outages as they occur and UPPCO has made arrangements with contracted resources to expedite restoration efforts wherever possible, French said in the statement.

People are advised to stay away from all downed power lines, and to always assume a downed line is energized.

Cloverland’s website reported this morning that approximately 3,800 customers, mostly in Bay Mills and Whitefish Point townships, are without power as of 3:30 this morning due to a downed transmission line. Cloverland crews working to repair it.

Waves have been reported close to 20 feet on Lake Superior and are expected to hit 25 feet or higher as the storm progresses, with impacts likely enhanced by the lake’s high levels, Zika said.

“The last time we had a storm like this back in 2011, the lake levels were near record lows and magnitude-wise, I wouldn’t be surprised if we see considerable erosion or more this time around because of the high lake levels,” Zika said.

In some areas west of Marquette and into Baraga County, rain may turn to snow overnight, he added.

“There might be a coating of slushy snow there overnight tonight, … but that won’t affect Marquette area proper,” Zika said. “The main thing is going to be the rain and the wind.”

Zika added, however, “It will feel winter-like with the combination of the wind and temperatures into the 30s and around 40.”

The NWS issued a flash flood warning Monday for portions of western and mid-lower Michigan, as well, with the heaviest rain expected to affect residents in the cities of Grand Rapids, Mt. Pleasant, Cadillac and Gaylord, according to the Associated Press.

Zika said the comparable fall storm in September 2011 caused power outages that lasted multiple days, but it remains to be seen whether history will repeat itself.

“This isn’t a typical every-couple-weeks type storm that we see in the fall,” Zika said. “Magnitude-wise, it’s pretty significant.”

Edit: An earlier version of this story had information from UPPCO that was sent at 9:40 a.m.

Update: The city of Marquette announced at 11:30 a.m. that due to inclement weather, fall brush pickup has been suspended. It will resume when weather permits. The city advises that any tree limb debris that has fallen on private property be placed curbside and a crew will pick it up.

The announcement further states that the city’s household rubbish site is closed today due to high winds and flooding. It will resume regular hours next Tuesday, October 31 from 3 p.m.-7 p.m. No makeup date will be set due to fall brush and leaf pickup.