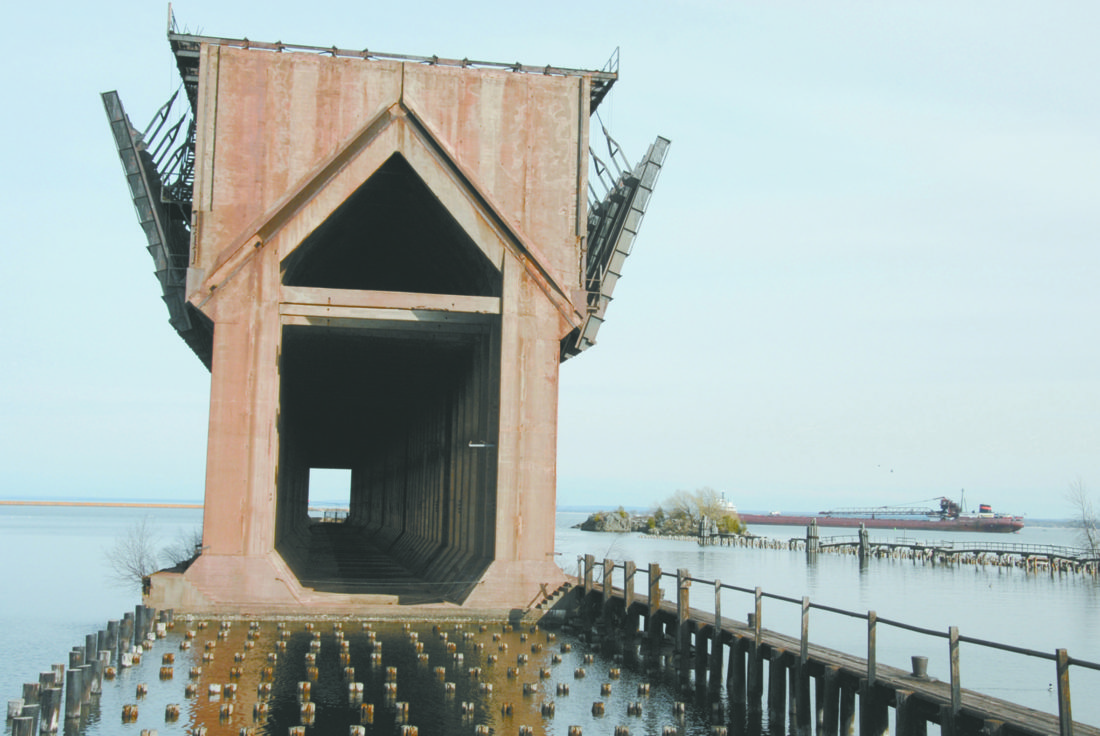 An effort is underway to transform the dormant Lower Harbor Ore Dock in downtown Marquette into a year-round botanical and ecological center. The BotEco Center non-profit organization, formed in 2013, has more information on its website, oredockboteco.org. (Journal file photo)

MARQUETTE — The BotEco project to revitalize Marquette’s Lower Harbor ore dock, which has been in the works since 2013, has received encouragement from the Michigan Department of Environmental Quality, according to city officials.

The non-profit organization presented its progress to the Marquette City Commission in a work session Tuesday evening. Commissioners expressed support for the botanical ecological project, which BotEco Center President Gisele Duehring said will not cost any local taxpayer money.

“Our goal is to transform the existing landmark into a point of pride and public space,” Duehring said. “We really want to emphasize the people of Marquette, make it the people’s dock and as one person put it, ‘a living landmark.'”

City Manager Mike Angeli said there had been restrictions related to the bottomland agreement between the city and state, which addresses the state-owned lake bottom beneath the ore dock. The ore dock itself was purchased by the city in 1999 for $1, Angeli said.

“Long story short, we had a conversation about restrictions related to the bottomland agreement from DEQ,” Angeli said. “Since that time, many different concepts have come forward as to the re-use of the ore dock, but most of them have been excluded because of the restrictions in the bottomland agreement, primarily that the ore dock could not be used as a commercial property, … but needed to be more focused in the public use or public sector.”

Angeli said they met with representatives from the state, who suggested the city write a letter to the DEQ outlining the city’s requested changes to the bottomland agreement, which the city did in August.

“Much to our, I think, surprise, 30 days later they responded, … saying ‘sounds good, what you’re proposing; we like the idea, we’re willing to interpret the bottomland agreement probably in the direction you are suggesting,'” Angeli said. “There is a necessity for a few edits … (but) they will work with us and the BotEco group to help facilitate the plan that they have in mind, which in turn prompted me to schedule this work session because we were kind of moving faster than I anticipated.”

The group aims to transform the dormant industrial site into a botanical and ecological center called the Ore Dock BotEco Center. The center would include ecological education and research facilities, year-round indoor botanical gardens, historical preservation and education, and community spaces.

Jim Cantrill, BotEco board secretary, said funding sources are out there for this sort of project, but straightening out the bottomland agreement was the first step.

Cantrill said he estimates the whole project would cost about $90 million in phases.

“Money begets money,” Cantrill said. “The botanical gardens and stuff is the last phase of this, but along the way, it’s not like you go for all the money at once, … slow steps. So the next thing would be the engineering.”

Angeli said the city would retain ownership, so it would effectively be a city park, with a legal relationship with the non-profit group for operation and funding.

An engineering study the city funded about three years ago to assess the ore dock structurally will be available to the group, he said.

Cantrill said the report “essentially says this thing can withstand anything,” besides some concrete breaking off due to freeze and thaw.

“This thing, compared with the Upper Harbor, is just bulletproof,” Cantrill said.

City Commissioner Mike Plourde said when he first saw the plans for the project, he thought they were very ambitious. But, he added: “Faith really does move mountains. Faith begets action.”

Architect and BotEco Vice President Joe Rom said the issue of faith is important, because projects like this are all about optimism and enthusiasm.

“When we bring people out onto the ore dock and people get face-to-face with it, they really start to understand really the grandeur and the scale of the space. It’s really almost like a basilica,” Rom said. “Everyone that leaves the ore dock really is pretty much 100 percent on board, you know, opening it to the public, making it a place for the community, a place that people go in the winter, gardens, weddings, holding hands, fishing. I mean there’s so many things that this can really do for the community, and I think people start to see the potential.”

Angeli said the city will work with the DEQ to finalize the bottomland agreement edits with final approval needed then from the state and commission.

Two people at public comment recommended the idea of incorporating renewable energy like wind and solar into the design. One person said he still wanted it to be an adventure park.

Mayor Dave Campana said he’s pleased with the progress of the group.

“You’re a very determined group and it’s nice you’re actually plodding ahead,” Campana said. “We hope good things come of this. I think it would benefit everybody.”

Duehring said she’s pleased and grateful for the city’s support, and that she’s always had faith in the project.

“It’s doable,” Duehring said. “There’s not one part of me that doesn’t think this is doable.”